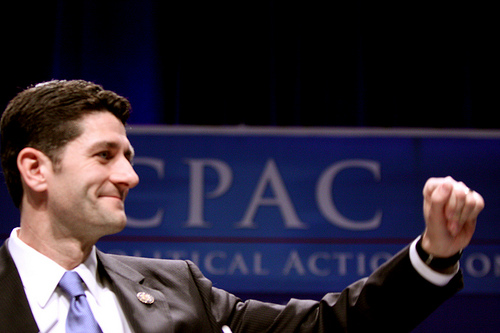 Call It What It Is: A Class War

The GOP’s budget is a naked assault on the poor.

When it comes to the Republican Party’s budget proposal that passed the U.S. House this week, I agree with those who find it strange that anyone sees the initiative as a serious attempt to “grow the economy,” as Rep. Paul Ryan (R-Wis.) claims. I also agree that the now-standard barrage of reports that accompany such an initiative render most non-political junkies confused, bored or both.

However, all of that doesn’t mean the proposal Ryan spearheaded is unimportant, nor does it mean that there are no worthwhile analyses to explain that significance. On the contrary, the proposal is quite important because it endorses an economic war waged by the upper class against everyone else. Two simple studies make this war painfully obvious.

Considering this, it is no surprise that the United States is one of the industrialized world’s most economically unequal nations. Just as unsurprising is International Monetary Fund data showing that such acute inequality reduces macroeconomic growth. In light of that, any proposal purporting to create what Ryan calls a “pro-growth economy” should, in part, include policies that aim to make the United States less stratified.

That brings us to the first report on Ryan's budget, courtesy of the Center on Budget and Policy Priorities (CBPP).

As that watchdog group shows, the allegedly “pro-growth” GOP proposes no big cuts to corporate welfare or other subsidies that enrich the already rich. Instead, the party proposes that 66 percent of the cuts come from “programs that serve people of limited means.” Yes, that's right—the “pro-growth” GOP is proposing to primarily cut the programs that reduce economic inequality and, thus, spur economic growth.

Where do much of the savings generated from those cuts go? That gets us to a report by Citizens for Tax Justice. The nonpartisan group discovered that after a decade of trickle-down tax cuts delivered more economic inequality and historically weak macroeconomic growth, the GOP is now proposing a budget whose centerpiece is a proposal to give those with an “income exceeding $1 million (an) average net tax decrease of over $200,000.”

Taken together, these two analyses spotlight the self-evident moral argument against such a budget. With all those aforementioned facts showing the rich getting richer and everyone else getting hit so hard, how heartless does a political party have to be to propose this kind of budget blueprint?

That however, is the wrong question, because this isn’t about morality; it is about ideology and more specifically, an ideological commitment to a class war.

Supercharged as it is, that phrase—class war—is appropriate and accurate. As the data prove, the GOP and its financiers are so committed to a class war that the party is willing to put forward a budget proposal that quite clearly preferences fighting that war over doing what’s actually necessary (read: addressing inequality) to fix the economy.

That may not make for a proposal that is a serious attempt to address America’s problems, but it does make for one that is significant in how honestly it states the Republican Party’s true long-term goals.