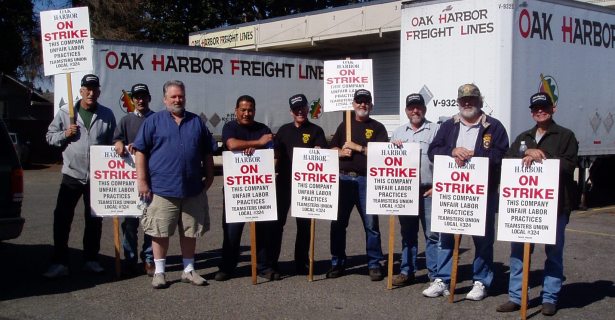 Resolution of a Teamster dispute that began with a 2008 strike against Oak Harbor Freight Lines was further stalled by January’s Noel Canning v. NLRB decision. Photo via Teamsters Local 324.

Employers are waking up to the fact that they are no longer required to follow the NLRB’s orders.

Because of the Canning decision, Rhinehart explains, any employer can now go to a federal appeals court and be granted an indefinite delay in enforcement of any NLRB action taken in the last 14 months.

The day-to-day application of key federal protections for workers’ collective bargaining rights is becoming paralyzed, say legal experts and union organizers, as employers across the country realize that a recent federal court decision effectively allows them to ignore the enforcement of the landmark National Labor Relations Act.

The implementation of the New Deal-era law—which protects the right of most workers in private industry to form unions and negotiate collectively with employers—is reported to be slowly grinding to a halt as result of a January 25 court decision in Noel Canning v. NLRB [PDF]. The U.S. Court of Appeals for the District of Columbia ruled that President Barack Obama improperly employed the recess appointments clause of the constitution to name new members of the National Labor Relations Board (NLRB). This means, in effect, that almost 800 NLRB actions taken since the January 2012 recess appointments are unenforceable and that the current board is powerless to implement new orders. Or, as former NLRB Chairman William B. Gould IV tells In These Times: “Compliance with NLRB enforcement is voluntary for employers at this point.”

“There is plenty of evidence that it is having a huge impact on the ground,” says Lynn Rhinehart, co-general counsel of the AFL-CIO. She describes the decision’s effect on union organizing campaigns across the country as “deep and problematic.”

Because of the Canning decision, Rhinehart explains, employers are challenging NLRB decisions in the D.C. Circuit Court, which is automatically putting these cases on hold. More than 60 employers have filed such cases since the January 25 decision, NLRB spokesperson Nancy Cleeland confirms, and more are expected. All of these cases are officially being held in abeyance pending U.S. Supreme Court action to either affirm or overturn the Canning ruling. That could take up to a year, Cleeland estimates.

Many employers aren’t bothering to formally request delays, but simply ignoring the NLRB rulings that remain in legal limbo. A March 23 story in the Huffington Post details how West Virginia union members mistreated at the hands of anti-union coal operators must now wait indefinitely to see their jobs and backpay restored. Similarly, some Connecticut nursing home workers are being deprived of their legal wages and benefits, says Deborah Chernoff, a spokesperson for the New England division of the healthcare workers union 1199SEIU. In a case notable for both its bitterness and complexity, strikers at five nursing homes operated by HealthBridge are back at work, but not at the compensation levels ordered by the NLRB last year. Instead, they are receiving lower wages and reduced benefits ordered by a bankruptcy judge, and the NLRB is powerless to enforce its order or challenge the bankruptcy court's decision, Chernoff says.

Meanwhile, the decision has stopped some organizing campaigns in their tracks. Ann Twomey, president of the New Jersey-based Health Professionals and Allied Employees union, says that about 200 nurses fighting for a union at Memorial Hospital of Salem County are “on hold” because of the legal uncertainty at the NLRB. The employer—notoriously anti-union Community Health Systems (CHS)—is stalling talks toward a first contract, despite the union’s 2010 victory in a representation election, Twomey says. Normally in such a case, the union could call on the NLRB to order the employer to the negotiating table. But that’s not an option until the legal authority of the NLRB is re-asserted, says Twomey. “The nurses are functioning as a union and are doing their best,” she says, “But they don’t have a contract, and there isn’t a way forward” without the NLRB.

Resolution of outstanding legal issues in older cases is even affected, says Michael Beranbaum, organizing director of Washington state-based Teamsters Joint Council 28. A Teamsters strike against Oak Harbor Freight Lines in 2008 created legal issues around pensions and healthcare benefits, he tells In These Times, but resolution is being further stalled because the trucking company went to federal court seeking new delays under the Canning decision. “This is an example of the pitiful mess in Washington, D.C.,” resulting from Republican Party obstruction of President Obama’s legitimate appointment powers, he says.

According to a March 11 story in the Wall Street Journal, high-profile employers such as Starbucks, Time Warner, Laboratory Corporation of America Holdings, Domino’s Pizza and McDonald's are entering the courts in efforts to hamper the actions of the NLRB. In addition to requests for enforcement delays, cases have been filed as a preemptive step to discourage NLRB involvement in workplace disputes at those companies, the newspaper reports.

A common element in many of these cases is that employers are being aided and abetted by the U.S. Chamber of Commerce, according to Rhinehart and other worker advocates. The Chamber assisted the managers of the Noel Canning Corp. in advancing their court case and the Chamber’s Litigation Center is currently maintaining a Web-based “resource page” for employers to coordinate action against the NLRB. The Chamber is also said to be mobilizing Republican members of the Senate to prevent the confirmation of any new NLRB appointees in its ongoing efforts to immobilize the board, Rhinehart indicates.

“It looks like they [the NLRB] are just out of business for the next nine months, at least,” says former NLRB chairman Gould, who teaches at Stanford Law School and is the author of Labored Relations: Law, Politics, and the NLRB–A Memoir. “It will take at least that long for the Supreme Court to act,” he says, and an anti-union ruling could very well create even more delay and confusion.

“They [the NLRB] are trying to march right along, issuing new decisions and acting as if the D.C. Circuit Court will inevitably be overturned, but employers don’t see it that way at all,” Gould says. “I can tell you right here in the Bay Area that NLRB subpoenas are not being enforced. Employers are just refusing to honor their subpoenas.”

NLRB’s Cleeland confirms Gould’s report about the agency’s subpoenas. “We’ve seen challenges at every level” of the legal process, she says.

Gould says the current situation is reminiscent of the first two years following the 1935 enactment of the original law, also known as the Wagner Act (after its chief sponsor Sen. Robert Wagner, D-N.Y.). Employers actively resisted the new law on a large scale, Gould says, and many refused to cooperate in any way until the Supreme Court ruled on its validity.

“Back in those days there was something called the Liberty League that cheered the employers on. The Chamber of Commerce is playing that role today,” Gould says. “So this is not new. Their antipathy to labor law and to the NLRB is longstanding. The only thing that’s new is that they [NLRB opponents] are sitting pretty ….They don’t have to do anything” to comply with the Wagner Act until the Supreme Court clarifies the situation.

Not all union organizing is affected by the Chamber of Commerce’s efforts to neuter the NLRB. For example, railroad and airline workers are not covered by the Wagner Act, and campaigns in those sectors are going forward unaffected because they are under the aegis of the separate National Mediation Board. Likewise, public sector employees are not covered by the 1935 law, so the Canning decision does not impact their union initiatives at local, state and federal levels.

AFL-CIO’s Rhinehart says the mess at the NLRB could best be cleared up if the U.S. Senate simply confirmed the new NLRB nominations submitted this year by the Obama Administration. A new board could then re-certify the decisions already made and return to work as normal, she says. But that doesn’t seem likely anytime soon, other labor advocates say, and thus some action by the Supreme Court seems required to get labor law back on track. Until then, it appears that the Chamber of Commerce has succeeded in effectively preventing the NLRB from doing its job.