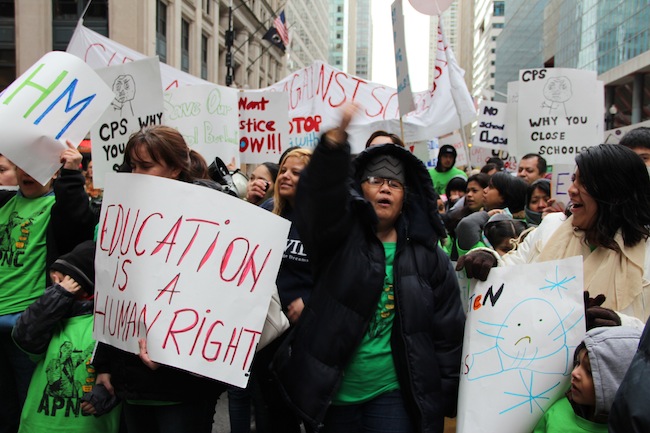 CHICAGO—Thousands of Chicagoans filled downtown streets on Wednesday evening denouncing the city's plans to close 54 schools, most of them in African-American neighborhoods. Protesters called the closings a “racist” move that will slash jobs and destabilize communities

In an act of planned civil disobedience, more than 100 people were arrested sitting in the street outside City Hall. Among them were church leaders, school janitors, cafeteria workers and teachers. People cheered loudly as the arrestees walked along a gauntlet of supporters, their hands cuffed behind their backs. One woman in a purple SEIU T-shirt gave a kiss on the cheek to one of the officers after being arrested.

There was a sense of déjà vu to the protests: In September during the Chicago Teachers Union strike, crowds filled the same streets and likewise waved signs attacking Mayor Rahm Emanuel and his plans to revamp the public education system. At the start of the rally, CTU President Karen Lewis described the school closings as an unjust move.

“I think he’s a great manipulator and liar,” Smith said of Emanuel. “And Andrea Zopp—she should be out in our communities creating jobs, not closing schools.”

Zakkiyyah Muhammad, a home healthcare worker and SEIU member, sees the closings as part of a larger trend. She worked for the Board of Education in the 1980s, before the mayor’s office took control of the school system and got the power to appoint the school board.

“[Emanuel’s] plan is to run black people out of these communities and clear the land, so they can bring in people who don’t look like us,” she said. “I agree with Karen Lewis that he’s a racist and a murderer.”

A student marching band performed a Michael Jackson medley as protesters marched around City Hall. In a city that is divided into a crazy quilt of gang allegiances, numerous students told In These Times they think gang and violence problems will get worse as some neighborhood schools are closed and others are combined into one building.

Rehab Ghasin, 20, worries about the safety of her 15-year-old sister once the plan goes into effect. “They’re not acquainted with our neighborhoods,” she said of the board. “This doesn’t matter to our mayor.”

“Kids will drop out and violence will go up,” predicted Rehab’s sister, Asalh. “It’s a stupid decision.” “The shootings and killings will increase,” added Niaira Marshall, 18, a high school senior who plans to study elementary education in college. “As a future elementary school teacher this affects me. And there are generations that grew up in these schools. My principal also went to the school. Parents and grandparents, a lot of memories.”

“Students and parents are the ones being affected and they didn’t have a voice in this,” added her friend Christopher Canady, 17.

Alberto Guzman, 10, carried a sign celebrating his school, William H. King Elementary, which is closing. “It’s the best school I’ve ever known, I’ve been there five years,” he said somberly. His sign read: “What happened to all the dreams of becoming the next president? Barack Obama this is your city, why we aren’t getting no support?”

The school closings issue has united a wide range of groups across a range of interrelated issues. Sending students to farther-away schools will be a challenge for many working parents. Neighborhood and citizen action groups—including the Pilsen Alliance, Albany Park Neighborhood Council and Action Now—worry about increased violence and the larger economic and social impacts as schools that were community anchors disappear and some residents lose their jobs. Not only teachers, but custodians, cafeteria workers and other staff stand to be laid off. Along with the Chicago Teachers Union, the service and hospitality unions SEIU and UNITE-HERE helped orchestrate the protest.

“The reason we have a billion-dollar deficit in the public schools is because we took a billion in property tax dollars through TIFs to develop downtown,” said SEIU Local 1 president Tom Balanoff at the start of the rally. He was among those later arrested.

Aubrey Saulsberry and another SEIU Local 1 custodian who declined to give his name said they’re worried their pay will be reduced or their benefits cut as the city seeks cheaper contracts.

“I’m already living paycheck to paycheck, and I have children and grandchildren in the public schools,” said the custodian, who works at an elementary school on the South Side. “You take away these little jobs we have, how do you expect our communities to function? Our communities are already in devastation. If you close the schools, it’s going to be chaos.”

“The scuttlebutt is the gang problems,” added Saulsberry.

Many protesters linked the school closings to the planned opening of numerous charter schools in Chicago, though schools officials have said the issues are separate. Lewis listed schools being closed named for legendary African Americans, including Mahalia Jackson and Daniel Hale Williams.

“He’ll close those schools,” said Lewis. “But he’ll open a [charter] school to put a billionaire’s name on the front of it.”