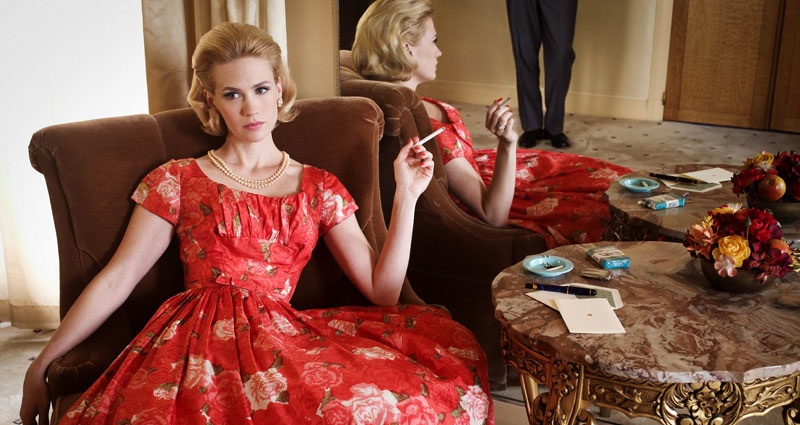 Will the Real Betty Draper Please Stand Up?

In Mad Men’s new season, we need the slap-in-the-face Betty back.

For a generation of artisanal cupcake-bakers. Betty’s photorealistic self-oppression stripped all the irony away, reminded us how privileged we had to be to enjoy those vintage aprons.

The Feminine Mystique is now 50 years old. And, since no feminist landmark can be observed without a ceremonial dumping of blood on the prom queen’s head, New York magazine elected to celebrate by running a trend piece on “the feminist housewife.” In sum, the article revealed that some straight women have noticed that working outside the home is hard and not always fun, and that getting married to a rich guy is a way to avoid it.

But all the earnest speechifying about gender roles in the world couldn’t disguise the fact that this was primarily a story about class privilege. There are no feminist housewives in a household where both incomes are necessary—nor, I imagine, is the ultra-liberating feminist housewifery trend much embraced among single moms. New York was resurrecting a time-worn fantasy about sleeping your way out of a crap job and into the leisure class, the hottest new lifestyle trend since 1811 (next up: “Sensibility! Is it really better than sense?”), and deserves no more serious consideration.

Except as a reminder of this fact: Fifty years is a long time. It’s long enough, history reliably tells us, for a culture to stop remembering certain traumas and to start fetishizing them instead.

There is a generation of women—OK, mine—for whom the signifiers of old-school oppression have become signifiers of cool. Betty Friedan and her generation wrote about the chains of domesticity, the mind-numbing boredom of spending your entire day with no human company but a toddler and no work more intellectually stimulating than knitting a new pair of socks. Friedan depicted housewives going insane from isolation and intellectual atrophy, women fresh out of top colleges starting to sleep all day or take heavy tranquilizers upon waking, or sometimes breaking out into huge, bloody blisters all over their bodies because, my God, there was nothing to fucking do.

By the time I was in my twenties, the co-founder of the hip feminist magazine Bust had published a book of knitting patterns. It sold quite well. I owned it. Girls my age perfected knitting, and cupcakes, and apron-wearing, all of it re-appropriated into twee/ironic (tweeronic?) feminist signifiers. I once knew a woman who wore nothing but vintage housedresses. As in, “dresses you don’t wear outside the house.” I thought it was an amazing look, and began to copy it at once.

There was something potent in it—the term we used, when we had to come up with a defense, was “reclaiming.” Mostly it was about facing fears of being stereotyped: declaring that we could bake cupcakes all we liked without being weak. But lately, I’ve begun to wonder if all that theorizing was just forgetfulness. Friedan had tranquilizers and bloody blisters; we have trend pieces on the feminist housewife. Friedan had anomie; we have irony. Friedan had The Feminine Mystique; we have Mad Men. Which began again in April, and which, at one point, promised to be our most potent safeguard against forgetfulness and fetishism, in the memorably stunted—and Friedan-ishly named—person of Betty Francis (formerly Draper).

It was a visceral shock to see a character like her on-screen. Because, yes, Betty was crazy. One of her first big scenes on Mad Men showed her accidentally-not-accidentally crashing her car onto a neighbor’s lawn. Betty was also hateful: a warped, inarticulate, vain child-woman with a tendency toward violent rage and a heart that beat pure ice water. And (this was the brilliant part) the show routinely made the point that Betty was so crazy and awful because, according to the value system of her time, Betty was perfect. She was hideous, a monster, and she never had a choice to be anything else.

The extent to which Betty was infantilized and diminished by her perfect mid-century femininity, and the extent to which she complied with her own oppression, was viscerally disturbing. And it should have been, especially for a generation of artisanal cupcake-bakers. Betty’s photo-realistic self-oppression stripped all the irony away, reminded us how privileged we had to be to enjoy those vintage aprons; she was a continual slap in the face to our complacency. Hate her? If no one had spoken up, you would have been her. Mad Men used to be a show that reliably made you want to be kinder to your grandmother.

That’s a risky, complicated point to make—a little too rich, in fact, for many viewers of even “good” TV to digest, which is why Betty was always one of the most-hated characters on the show even when she wasn’t written to be. It’s probably also why, over the course of five seasons, Betty became a cartoonish villain that her poor, sweet, chronically philandering and lying husband had to ditch for a chance at happiness. The show has settled for a less nuanced feminist message by turning Betty into Voldemort and doling out more crowd-pleasing tales of female corporate success via Joan and Peggy.

Here’s hoping the series recovers in its sixth season. Creator Matthew Weiner, at least, seems to see what has always been great about Betty. Explaining why she was so widely hated by the audience, Weiner told Details, “It’s like people are looking in the mirror and seeing a wart that they don’t want to look at.”

If the trend pieces in New York magazine are any indication, we sorely need a good, hard, ugly look right about now.