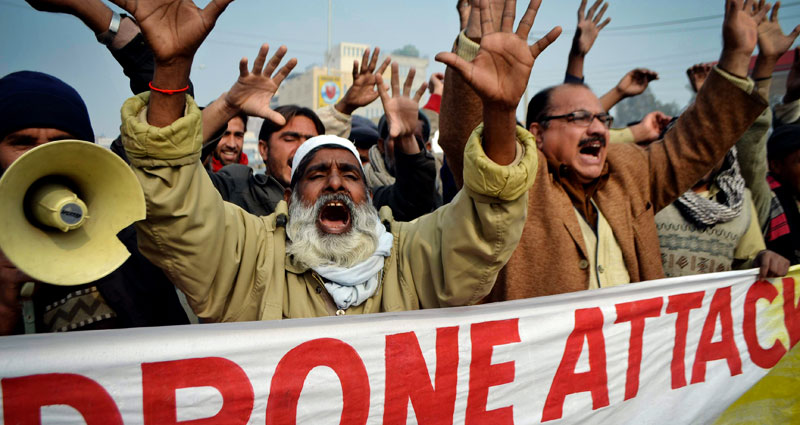 On January 8, demonstrators shout anti-U.S. slogans during a protest in Multan against the drone attacks in Pakistan tribal areas.

For the first time in history, the United States government has proclaimed its legal right to assassinate any person, anywhere on the globe, as long as our chief executive believes that person to be a terrorist. President Barack Obama has said that most of the people we are incinerating are “al-Qaeda suspects who are up in very tough terrain along the border between Afghanistan and Pakistan.”

Precise numbers are hard to come by, due to the secrecy under which the drone program operates. But the various groups that track drone strikes agree that since Obama took office, more than 350 strikes in Pakistan, Yemen and Somalia have killed at least 2,400 people. This means, outside of Afghanistan, U.S. drones are killing on average at least 47 people a month. If you include drone strikes in Afghanistan, the numbers are much larger.

The administration’s claim as to the legality of these strikes relies on the fiction that a rigorous review of evidence takes place before a “terrorist” is targeted. However, no matter how smart and reasonable Obama might be, he is not personally reviewing the evidence against most of the people we are killing. In fact, according to CNN, at least half of drone strike deaths have been the result of “signature strikes,” in which drone operators decide, based on visual evidence of suspicious behavior, to fire on people whose identities they don’t even know. As one government official told the New York Times, to the CIA, “three guys doing jumping jacks” looks suspiciously like a terrorist training camp.

As new details emerge about the drone program in Pakistan, the administration’s official explanations begin to unravel. We now know, as Mark Mazzetti reported in the April 6 New York Times, that the first strike occurred in June 2004, when the United States used a Predator drone to assassinate Nek Muhammad, a Pashtun tribesman, at the request of Pakistan. The drone also killed two boys, ages 10 and 16. In return for this killing, Pakistan allowed the CIA to deploy Predator drones in its airspace.

And as reported by the McClatchy newspapers based on a review of classified intelligence reports, under President Obama, the drone program has continued to target and kill not just senior al-Qaeda leaders, but also “hundreds of suspected lower-level Afghan, Pakistani and unidentified ‘other’ militants in scores of strikes in Pakistan’s rugged tribal area.”

In the rare cases in which Obama does personally review evidence and approve a drone strike, he is hearing only one side of the story. Just as criminal suspects always seem guilty after a briefing by law enforcement, Muslim men living in remote and lawless regions of Pakistan or Yemen will always seem like terrorists to Obama after a CIA briefing. Moreover, much of the information used for drone targeting comes from informants, who are notoriously unreliable. For example, agent “Curveball” composed elaborate drawings of Saddam’s mobile weapons labs that existed only in Curveball’s head, but were nevertheless used to justify the Iraq War.

Our founding fathers valued an adversarial system of justice because they understood that government officials, even smart and well-meaning ones, are not always right.

Law enforcement agents and prosecutors might find it convenient never to have anyone oppose or even question their evidence, but the good ones also recognize the inherent danger of such an unbalanced system.

I recently defended a murder case in Charleston, Ill. If you spoke only to the prosecutors and detectives, you would have heard how three witnesses observed my client, Chris Oliver, kicking and stomping a developmentally disabled man to death, and you would have been easily convinced that Oliver is a killer.

But because Oliver had a defense lawyer and an investigator on his side, we were able to show the jury that two of the prosecution’s witnesses were severely mentally ill, had given numerous conflicting stories and had been pressured by the police to implicate Oliver, and that the third witness had himself been implicated in the beating and named Oliver only after cutting a deal with the state. We also introduced time sheets and cell phone records overlooked by the police, which showed that Oliver was not even present for the attack but was called to the scene after the beating to care for the victim. After hearing both sides of the story, the jury in Charleston quickly acquitted Oliver of murder.

Sadly, all we will ever know about the thousands of humans incinerated by our drones is that the CIA believed them to be terrorists.