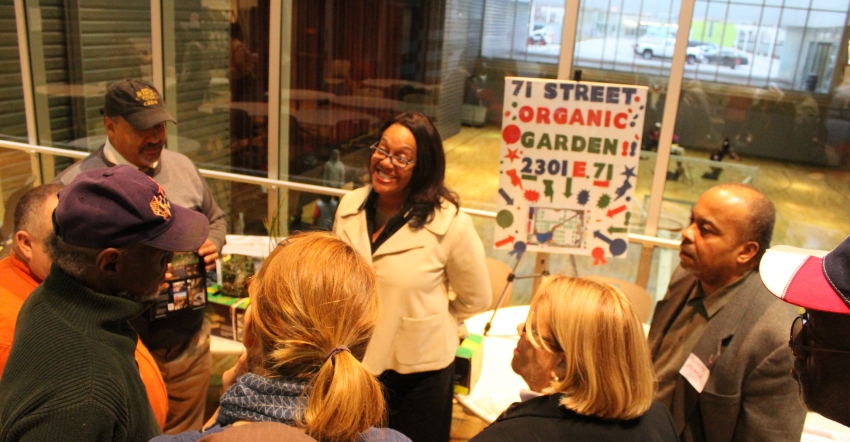 A Crash Course in Citizen Budgeting

What Chicago can learn from participatory budgeting projects around the world.

New York’s first year of participatory budgeting suggests that much of the program’s value may lie in less tangible outcomes—namely, the strengthening of community and civic relationships.

This is the second installment of “Direct Democracy in Chicago's 5th Ward,” a 5-part series that will follow the participatory voting process in the 5th Ward. This series is supported by a grant from the Local Reporting Initiative of the Chicago Community Trust. Read the first part of the series here.

In October 2012, residents of Chicago’s 5th ward began the long process of determining how to spend the $1.3 million in municipal funding that’s been turned over to them as part of the ward’s first experiment in participatory budgeting. The funds are designated for capital improvement projects, and for months, volunteer community representatives have been drafting concrete proposals for infrastructure projects from more than 150 ideas brainstormed by constituents. On Wednesday, having narrowed down the list to about 15 projects, representatives presented their proposals at the first of two project expos to be held before the budget vote in early May.

Participatory budgeting may be new to the 5th ward, but the concept is decades old and has been undertaken by millions of people in 1,500 cities across the world (in Chicago, the process was introduced in 2009, in the 49th ward). But while the basic premise of each of these projects may be the same—giving citizens a say in how to spend municipal funds—the execution has varied greatly from city to city, as have the results. Understanding the strengths and the weaknesses of participatory budgeting projects around the globe can show the limitations and possibilities of the process in the 5th ward, and provide insight into how the program can maximize—and sustain—citizen engagement.

The first city to experiment with participatory budgeting was Porto Alegre, Brazil, where the newly elected Workers’ Party initiated the program in the late 1980s.  The project was meant to signify a new, inclusive approach to governance, but residents, who had been dominated by the military and ruling elites for decades, were initially reluctant to participate. Seeing this, the Workers’ Party understood that it wasn’t enough to simply open up the budgetary process to residents, and instead, it hired organizers to promote the program and to help guide wary residents through every step of the process.

The hiring of community organizers is a hallmark of Porto Alegre’s program. A 2006 study on the origins of participatory budgeting found that:

This process did not always happen by itself. The work of community organizers hired by the government proved crucial both for activating existing neighborhood organizations and for creating new ones. Such organizers worked in each area of the city. They traveled the regions, met with existing organizations, identified potential leaders in neighborhoods that lacked such associations, called meetings, encouraged groups to form new associations, and encouraged existing leadership to promote more open participatory arrangements.

Another important factor in the success of the program in Porto Alegre was the responsiveness of the city to residents’ concerns. After the first year, for example, in response to criticism that the amount of the budget available to the program was too small, the government worked with the community to expand the program. This thoughtful, inclusive approach paid off, as thousands of the city’s poorest residents mobilized to bring housing, schools, drinking water and safe streets to long-neglected city slums. Today, tens of thousands of residents decide how to spend hundreds of millions of dollars, and community organizations and civic groups have flourished.

Progressive, Socialist, and other left-leaning European governments have been the most enthusiastic supporters of participatory budgeting outside of South America. More than a hundred municipalities, as well as community boards and neighborhood councils, use participatory budgeting in a variety of different ways. A 2008 study published in the International Journal of Urban and Regional Research divided European efforts in six different categories, ranging from the truly bottom-up, social justice-oriented programs in cities like Córdoba, Spain—where citizens develop projects and the government is required to implement them—to more top-down approaches that merely consult residents without granting them any real budgetary power.

According to the study, although many cities in Spain and Italy have used participatory budgeting to strengthen civic bonds and increase transparency, Grottammare, Italy, “is the only example of fundamental social improvements that have taken place through participatory budgeting.” In 1994, a coalition of activists and socialist politicians in Grottammare ousted the ruling party, which had planned to develop the seaside city into what the coalition considered to be a crass resort town. Empowered by neighborhood assemblies, citizens made their own plans for modest, tranquil development, and they continue to use participatory budgeting to improve the city according to the collective public interest. In the first ten years of the program, according to the 2007 book The New Public Service, by Janet and Robert Denhardt, neighborhoods that faced the worst problems were the most eager to participate, and the new city government implemented 90 percent of citizens' ideas.

By comparison, in many cities across Europe, according the 2008 study, participatory budgeting projects “had more in common with a ‘show,’” as politicians used the label, and its implications of citizen empowerment, to describe and promote processes that extended little real oversight or authority to citizens. For example, in Emsdetten, Germany, in 2002, the “participatory budgeting” program amounted to little more than presenting residents with a questionnaire that asked them to choose between five government-authored proposals for how to balance the city budget. To avoid such weak processes, the study’s authors write, a participatory budgeting program must be “a combination of a strong and pragmatic political will on the part of the local government on the one hand, and of bottom-up mobilization on the other side.” In other words, without the government making a dedicated effort to organize disenfranchised constituents and to empower them with significant control of the budget, politicians and activists will not recreate the kind of results seen in Porto Alegre.

Participatory budgeting in New York City (PBNYC), like in Chicago, is a very recent experiment. Four districts (which are roughly equivalent to Chicago’s wards, in that they include parts of multiple neighborhoods) debuted the program in the 2011–2012 fiscal year. Together, over 7,000 residents of the four districts voted on projects totaling $5.6 million.

As in Chicago, the funds allocated for participatory budgeting in New York are just a tiny portion (.06 percent) of the city’s total capital budget, and a 2012 study of NYC’s pilot year of participatory budgeting found that most of the projects that constituents proposed were in fact similar to projects city council members had overseen in the past. But New York’s first year of participatory budgeting suggests that much of the program’s value lies in less tangible outcomes—namely, the strengthening of community and civic relationships. According to the study, 78 percent of budget delegates (equivalent to Chicago’s community representatives) said that by the end of the process they better understood the needs of their district, 82 percent said they were more likely to take part in a community organization, and 75 percent of budget delegates whose formal education didn’t extend beyond high school said that they felt more comfortable contacting government agencies and officials. In every district, people of color and low-income residents participated in the process “at higher rates than traditional electoral politics.”

Community Voices Heard, an organization that worked to promote PBNYC, made a special effort to engage residents outside of the “usual suspects” by hiring community organizers to reach out to citizens less likely to participate, such as public housing residents. The benefit of this outreach can be seen clearly in District 8, which includes neighborhoods in Harlem and the South Bronx. During the city council elections in 2009, residents with an annual income of less than $10,000 made up just 4 percent of the electorate in District 8, but they made up 22 percent of the residents who turned out for the budget vote. And District 8 participants created some of the most innovative projects, like buying new vans for the local Meals on Wheels and a senior transportation service.

The varying experiences of participatory budgeting projects around the world point to possible next steps for participatory budgeting in the 5th ward. The program will certainly face challenges: It may not be easy to sustain enthusiasm for a project that requires so much time and energy from ward residents while imposing such narrow constraints on how much money is available and how it may be spent, and the experience of certain European cities demonstrates how participatory budgeting can easily be turned into a symbolic gesture rather than a vehicle for real citizen empowerment. But expanding the process to include larger parts of the city budget, responding quickly and sympathetically to participants’ critiques, and steadfastly organizing new participants—rather than relying on those who are already politically engaged—can, as in places like Porto Alegre and Grottamare, empower Chicagoans to address severe inequalities in public services and allow them to create a city that conforms to their own desires, rather than corporate interests.