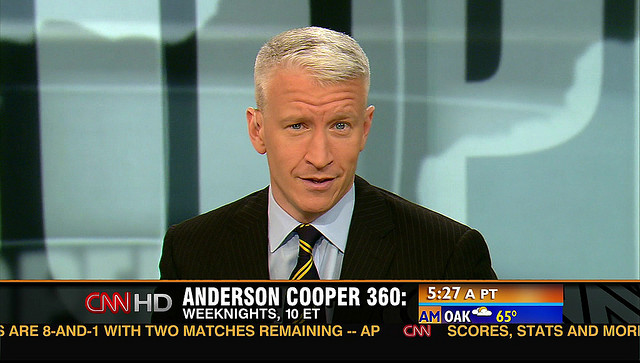 What is a blogoporterator? Find out now!

The days of Anderson Cooper parachuting into a war zone are giving way to Anderson Cooper teaming up with Kathy Gifford to talk about sex. One part reporter, one part commentary.

The week of the Boston bombings has been a cascade of embarrassments for the news industry. On Wednesday, CNN falsely reported that arrests had been made. On Thursday, the New York Post, never known as a pillar of journalist ethics, sunk to a new low with a front-page photo of two young men, captioned, “Feds seek these two pictured at Boston marathon.” The only hitch: These weren’t the suspects. One of them says he’s now afraid to leave his house. On Friday, a slew of media outlets erroneously reported that the suspects had robbed a 7/11.

But should these media fails really surprise us?

Those who have been paying attention know that media outlets have been in a race to the bottom for over a decade. As journalist Nate Thayer describes it, “Not only have all the editors and others responsible for ensuring balanced and accurate story, which was crucial to ensuring believable information, been eliminated in budget cutbacks, but the more overwhelming new reality is the age of instant in the new borderless digital information age.”

When reporters are doing too many things at once, without support staff, and reacting to the minute-to-minute whims of the Internet, should we be surprised when they produce more fast food, less slow-cooked meals?

How we got here

In the 1970s, writer Tom Wolfe coined the phrase “new journalism” to define what would become the standard in long-form feature writing for print: It described the setting like a paperback novel. It depended on access to big sources and focused on storytelling. Those days are history. A new hybrid journalism has emerged.

Is it a blog? Is it an article? Is it an op-ed? Most likely, it’s all three. Both print and online journalists today are becoming one part blogger, one part reporter and one part commentator: a blogoporterator.

The blogoporterator is born and raised in a house of journalism that is downsizing and lowering its expectations.

On April 4, for instance, the Cleveland Plain Dealer announced it would reduce delivery of its print edition to just three days a week. The company is losing money as it loses readership. It's going to layoff staff at some point in the summer and will likely cease operations as a print newspaper before going all digital. Meanwhile, The New York Times has done away with its ambitions to become the paper of record to all of New England and is now selling The Boston Globe, undoubtedly at a loss.

The days of Anderson Cooper parachuting into a war zone are giving way to Anderson Cooper teaming up with Kathy Gifford to talk about sex. One part reporter, one part commentary. That's the new Anderson. It's a schizophrenic way to cover the news, but it is a cheap one. And outlets no longer want to shell out for journalism, which requires time and effort. Anyone can give their opinion, but to line up the facts behind that opinion—is Obamacare really going to kill your Grandma?—reporters have to read legislation. They have to interview key people. Their editors will have questions, and will send the reporter out to interview more sources, or clarify elements of the story for general readers.

Journalism also demands a support team: layers of editors, from fresh-out-of-college copy desk workers to well-paid senior-level editors in their 50s, to run interference between the unprocessed information of the reporter and the final product that makes it into print or broadcast. This ensures accuracy. It ensures readability and quality content.

But those layers are disappearing. The senior editors began vanishing in buyouts in the early half of the 2000s once the dot-com bubble burst and advertising revenue vanished.

Lay readers are now fully aware that the overabundance of content does not mean quality.

According to the Pew Research Center's State of the Media 2012 report, newsrooms today are “undermanned and unprepared to uncover stories, dig deep into emerging ones or to question information put into its hands.”

Of course, media companies are happy to have that time and effort for free. Thayer, a veteran reporter, recently went public when The Atlantic offered to pay him a whopping zero dollars for him to re-edit one of his articles on North Korea and Dennis Rodman. They said it would be good exposure. He argued they were a for-profit enterprise getting journalism for nothing. But the bottom line is that, for outlets that increasingly rely on per-view revenue from online advertising, journalism doesn’t necessarily pay off; speed and sensationalism do.

Writers feel that pressure in their paychecks. There seems to be a solid trend in online news toward valuing audience size and paying writers accordingly, says Jeff Sonderman, digital media fellow at the Poynter Institute. Gawker started out paying bonuses for individual pageview goals, then switched in 2010 to paying bonuses based on the unique visitors attracted by an entire editorial team.

Such incentives have bred life into the blogoporterator, a hybrid who is gunning for viewers right now. Even if she is writing for print, she knows her work will be reposted online, and she is casting a wider net to capture traffic from Google and Yahoo search engines. To court traffic, it’s easier to write quick and punchy, which is the world of the newswire, or blogger and the opinionated—the blogoportorator!—rather than the old-school journalist.

It is not easy to do three things at once. Most will fail at it. The State of the Media report said over 30 percent of respondents, a growing number, are fleeing their newspapers and magazines because of deteriorating quality.

Who succeeds in this new realm?

Those that develop a following and become the story themselves, or a personality, will succeed. Andrew Ross Sorkin of CNBC is an example. He runs the DealBook blog on The New York Times, is a financial news columnist for the paper, is a host of Squawk Box on CNBC and he's a book author.

Speaking at the National Conference for Media Reform in Denver the first week of April, Robert McChesney told a gathering of roughly 200 people that today's journalists are like actors. It's a popularity contest where many “full-time” reporters are finding it harder to succeed, especially those that are not attached to big-name news outlets, of which there are probably two left in print (The NYT and WaPo), and a handful on TV. Like the struggling actor, they need to wait tables to make ends meet. Journalism is struggling, and as it suffers existential angst, blogoporterators come to the fore hoping to save it from itself.

Kirsten Browning is an Ohio University journalism grad. She's an independent journalist based in Chengdu, located in the heart of China. She blogs. She vlogs. She does documentaries on Lebron James. I asked her about being a Jane-of-all-trades and if she felt any pressure to become a mini-personality in order to build a career in journalism today.

“Gone are the days of third-person story telling, like it or not. I call it the YouTube effect,” she says. “I've inserted my personality into stories, and the older journalists advise against that. as I build my portfolio of news clips. But I think it'll enrich the story. You have to be an honest mediator. The YouTube generation is more about interaction. People want to know who is doing the reporting. Those that are turned off by it will be turned off by it regardless. But the more we cling to the old school of thought on journalism, the more we are going to hear about the poor state of media,” she says.

It’s an argument we’ve heard before; the old “new journalists” of Wolfe weren't afraid of inserting their voice in a news story. Hunter S. Thompson was a new journalist. He was also a personality. Maybe there's nothing wrong with it. Maybe we need more Wolfes and Thompsons.

The problem is, who is going to pay for that? Part of what made their first-person reporting effective was the slow boil, taking the time to immerse themselves fully in the story and gain a deep understanding.

In a hyper-present society where news changes by the hour, writer cannot take the slow boat to Chengdu, China. They have to take the bullet train.

Slow, investigative outfits like ProPublica survive on grant money, not reader demand. Funders have to believe in the cause. When they don't, the cause withers.

Meanwhile, McChesney and John Nichols found the ratio of public relations workers to journalists grew from 1.2 to 1 in 1980 to 3.6 to 1 in 2008—and the gap has likely only widened since, Pew researchers said. Herein lies the rub: Efforts by political and corporate entities to get their messages into news coverage are nothing new. But what is different now is that news organizations are less equipped to question what is coming to them or, in the hyper-present digital environment, are unable to find the resources to cover those stories themselves.

Can the blogoporterator save the news media, whether mainstream or independent? I don't know. But I'm sure a few of them will try.

Thayer believes a model for real reporting is possible, providing there are readers who are willing to pay for it. “I believe that people see a critical, aggressive, balanced and independent press as a vital institution in a free society and it is worth paying however much it costs to ensure that it is vibrant and healthy.”

Right now, people aren’t ponying up. They’re moving on to the next link. Sometimes it's news. Sometimes its funny cat videos. (Oh, look, it's that British kid saying “Charlie bit me!” I love that one.) Soon you'll see them all on the home page of your local newspaper. Because the fact is that in the news business we both love and love to hate, you will now get exactly what you paid for. Even if it is the face of an innocent 17-year-old plastered under the headline “Bag Men.”

A longtime reporter and foreign correspondent for Dow Jones and the Wall Street Journal, Kenneth Rapoza is an In These Times columnist who writes about the news business. His work has also appeared in The American Prospect, The Nation and at Salon.com. He can be reached at ken@inthesetimes.com.