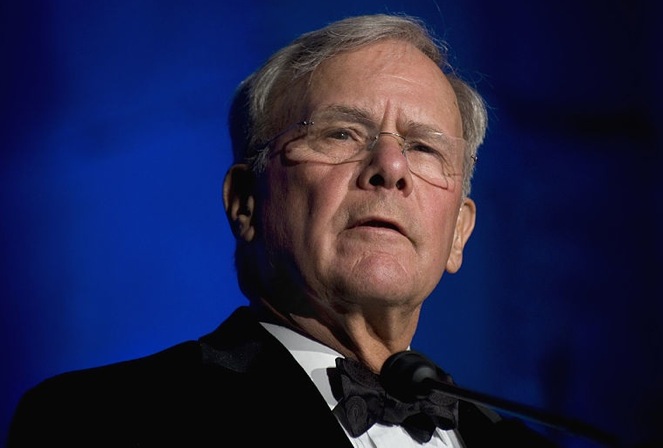 A Cronkite Moment for the War on Terror

Tom Brokaw states the glaring truth about the Boston bombings.

In a nation that often avoids acknowledging its own role in intensifying cycles of violence, it is unfortunately considered radical to do what the NBC News veteran did and mention that our violent attacks abroad increase the chance of retributive attacks at home.

“The stuff we have done overseas is now brought back into our own front yards. America's chickens are coming home to roost.”—Reverend Jeremiah Wright

In 2008, the hysterical backlash to the above comment by Barack Obama's minister became a high-profile example of one of the most insidious rules in American politics: You are not allowed to honestly discuss the Central Intelligence Agency's concept of “blowback” without putting yourself at risk of being deemed a traitor to country.

Now, five years later, with America having killed thousands of Muslim civilians in its drone strikes and wars, that rule is thankfully being challenged—and not by someone who is so easily smeared. Instead, the apostate is one of this epoch's most revered journalists—and because of that, we will see whether this country is mature enough to face one of its biggest national security quandaries.

This is the news from Tom Brokaw's appearance on “Meet the Press” last Sunday. Discussing revelations that the bombing suspects may be connected to Muslim fundamentalism, he said:

We have got to look at the roots of all of this because it exists across the whole [Asian] subcontinent and the Islamic world around the world. I think we also have to examine [America's] use of drones [because] there are a lot of civilians who are innocently killed in a drone attack in Pakistan, in Afghanistan and in Iraq. And I can tell you having spent a lot of time over there, young people will come up to me on the streets and say, ‘We love America, but if you harm one hair on the head of my sister, I will fight you forever.’ And there is this enormous rage against what they see in that part of the world as a presumptuousness of the United States.

As one of the establishment's most venerated voices, Brokaw is not prone to radical statements. But in a nation that often avoids acknowledging its own role in intensifying cycles of violence, it is unfortunately considered radical to do what the NBC News veteran did and mention that our violent attacks abroad increase the chance of retributive attacks at home.

Of course, Brokaw was merely stating the obvious: With America having killed thousands of civilians in its wars, we should be appalled by acts of terrorism—but we shouldn't be surprised by them. We should know that violence will inevitably come from those like the Boston bombing suspect who, according to the Washington Post, “told interrogators that the American wars in Iraq and Afghanistan motivated him and his brother to carry out the attack.”

Noting this is not to argue that such attacks are justified or that we deserve them. It is only to reiterate what Brokaw alluded to: Namely, that blowback should be expected in this age of Permanent War and that one way to potentially avert such blowback in the future is to try to de-escalate the cycle of violence.

To be sure, from Reverend Wright to Republican presidential candidate Ron Paul, many have made these points before. But they have typically been ignored or lambasted for uttering the truth. Brokaw, though, can't be so readily dismissed. He is a Walter Cronkite of his age, and, indeed, his declaration recalls Cronkite's seminal moment 45 years ago.

\Back in 1968, opponents of the Vietnam War were being marginalized in much the same way critics of today's wars now are. But when such a revered voice as Cronkite took to television to declare the conflict an unwinnable “stalemate,” he helped create a tipping point whereby Americans began to reconsider their assumptions.

In similarly making such an assumption-challenging statement, Brokaw has followed in Cronkite's heroic footsteps. The only question is: Will America finally listen?