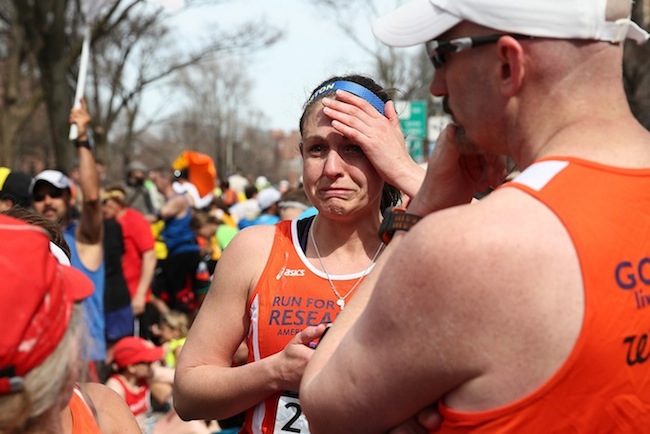 When we experience terror at home, we must remember the United States’s use of terror abroad.

It's rare for privileged Westerners to see, graphically, what many others experience daily--for example, in a remote village in Yemen.

April is usually a cheerful month in New England, with the first signs of spring, and the harsh winter at last receding. Not this year.
There are few in Boston who were not touched in some way by the marathon bombings on April 15 and the tense week that followed. Several friends of mine were at the finish line when the bombs went off. Others live close to where Dzhokhar Tsarnaev, the second suspect, was captured. The young police officer Sean Collier was murdered right outside my office building.
It's rare for privileged Westerners to see, graphically, what many others experience daily—for example, in a remote village in Yemen, the same week as the marathon bombings.
On April 23, Yemeni activist and journalist Farea Al-Muslimi, who had studied at an American high school, testified before a U.S. Senate committee that right after the marathon bombings, a drone strike in his home village in Yemen killed its target.
The strike terrorized the villagers, turning them into enemies of the United States—something that years of jihadi propaganda had failed to accomplish. His neighbors had admired the U.S., Al-Muslimi told the committee, but “Now, however, when they think of America, they think of the fear they feel at the drones over their heads. What radicals had previously failed to achieve in my village, one drone strike accomplished in an instant.”
Rack up another triumph for President Obama's global assassination program, which creates hatred of the United States and threats to its citizens more rapidly than it kills people who are suspected of posing a possible danger to us someday.
The target of the Yemeni village assassination—which was carried out to induce maximum terror in the population—was well-known and could easily have been apprehended, Al-Muslimi said. This is another familiar feature of the global terror operations.
There was no direct way to prevent the Boston murders. There are some easy ways to prevent likely future ones: by not inciting them. That's also true of another case of a suspect murdered, his body disposed of without autopsy, when he could easily have been apprehended and brought to trial: Osama bin Laden.
This murder too had consequences. To locate bin Laden, the CIA launched a fraudulent vaccination campaign in a poor neighborhood, then switched it, uncompleted, to a richer area where the suspect was thought to be.
The CIA operation violated fundamental principles as old as the Hippocratic oath. It also endangered health workers associated with a polio vaccination program in Pakistan, several of whom were abducted and killed, prompting the U.N. to withdraw its anti-polio team.
The CIA ruse also will lead to the deaths of unknown numbers of Pakistanis who have been deprived of protection from polio because they fear that foreign killers may still be exploiting vaccination programs.
Columbia University health scientist Leslie Roberts estimated that 100,000 cases of polio may follow this incident; he told Scientific American that “people would say this disease, this crippled child is because the U.S. was so crazy to get Osama bin Laden.”
And they may choose to react, as aggrieved people sometimes do, in ways that will cause their tormentors consternation and outrage.
Even more severe consequences were narrowly averted. The U.S. Navy SEALs were under orders to fight their way out if necessary. Pakistan has a well-trained army, committed to defending the state. Had the invaders been confronted, Washington would not have left them to their fate. Rather, the full force of the U.S. killing machine might have been used to extricate them, quite possibly leading to nuclear war.
There is a long and highly instructive history showing the willingness of state authorities to risk the fate of their populations, sometimes severely, for the sake of their policy objectives, not least the most powerful state in the world. We ignore it at our peril.
There is no need to ignore it right now. A remedy is investigative reporter Jeremy Scahill's just-published Dirty Wars: The World Is a Battleground.
In chilling detail, Scahill describes the effects on the ground of U.S. military operations, terror strikes from the air (drones), and the exploits of the secret army of the executive branch, the Joint Special Operations Command, which rapidly expanded under President George W. Bush, then became a weapon of choice for President Obama.

We should bear in mind an astute observation by the author and activist Fred Branfman, who almost single-handedly exposed the true horrors of the U.S. “secret wars” in Laos in the 1960s, and their extensions beyond.
Considering today's JSOC-CIA-drones/killing machines, Branfman reminds us about the Senate testimony in 1969 of Monteagle Stearns, U.S. deputy chief of mission in Laos from 1969 to 1972.
Asked why the U.S. rapidly escalated its bombing after President Johnson had ordered a halt over North Vietnam in November 1968, Stearns said, “Well, we had all those planes sitting around and couldn't just let them stay there with nothing to do”—so we can use them to drive poor peasants in remote villages of northern Laos into caves to survive, even penetrating within the caves with our advanced technology.
JSOC and the drones are a self-generating terror machine that will grow and expand, meanwhile creating new potential targets as they sweep much of the world. And the executive won't want them just “sitting around.”
It wouldn't hurt to contemplate another slice of history, at the dawn of the 20th century.
In his book Policing America's Empire: The United States, the Philippines and the Rise of the Surveillance State, the historian Alfred McCoy explores in depth the U.S. pacification of the Philippines after an invasion that killed hundreds of thousands through savagery and torture.
The conquerors established a sophisticated surveillance and control system, using the most advanced technology of the day to ensure obedience, with consequences for the Philippines that reach to the present.
And as McCoy demonstrates, it wasn't long before the successes found their way home, where such methods were employed to control the domestic population—in softer ways to be sure, but not very attractive ones.
We can expect the same. The dangers of unexamined and unregulated monopoly power, particularly in the state executive, are hardly news. The right reaction is not passive acquiescence.