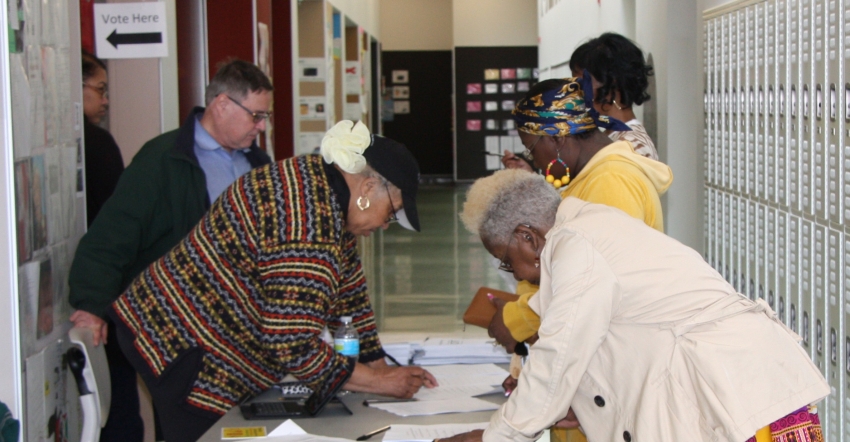 Residents of Chicago's 5th ward turn out to vote in the ward's first participatory budgeting election at Gary Comer College Prep on May 4.(Photo courtesy of Maria Hadden, PB Chicago)

Whose Budget? Their Budget.

At their first participatory budgeting vote, 5th ward residents take $1 million in municipal funds into their own hands.

The community representatives were also proud of what they had accomplished together: successfully completing a budgetary program most had never heard of before last year, working together to navigate the specifics of getting infrastructure built in the city and voting for unique projects that their alderman might never have thought of on her own.

This is the third installment of “Direct Democracy in Chicago's 5th Ward,” a 5-part series following the participatory voting process in the 5th ward. This series is supported by a grant from the Local Reporting Initiative of the Chicago Community Trust. Read the first and second parts of the series here and here.

“I’ve been around here forever,” says Candace White, standing outside of Gary Comer College Prep in Chicago’s Greater Grand Crossing neighborhood. “And we’ve never been allowed to vote on how the money is spent.”

Until now, that is. White is visibly happy, having just voted for her six favorite projects as part of the 5th ward’s participatory budgeting program (PB5). This year, for the first time, ward residents have had the opportunity to decide how their alderman’s “menu money”—up to $1.3 million for small infrastructure projects—will be spent. Since last fall, volunteer community representatives have whittled down over one hundred ideas to 13 specific, feasible projects, which run the gamut from public murals to sidewalk repairs.

On May 4, White and dozens of other residents pass in and out of a classroom at the South Side high school. Walking around the perimeter of the room, or sitting at desks, voters study the 13 posters hanging on the wall, each of which includes an explanation of the proposed project, along with pictures and the estimated cost. By the end of the day, 103 residents have voted (including those who had participated in early voting the previous week).

Because of the relatively low price tags of the projects, all but two or three will likely be funded. Ward staffers will soon submit service requests to city agencies like the Chicago Department of Transportation to begin the process of repaving streets, fixing sidewalks and other tasks routinely funded by ward money. The more unique projects—like large wall murals and a community garden—will take months more work by volunteers and ward staff to finish.

White cast her ballot for many of the projects that would end up winning, including turning a vacant lot on 71st street into an urban garden where community members can volunteer to help grow fresh food. Another winner was the installation of more than $400,000 worth of new street lights throughout the ward, the most costly project on the list. It’s clear that these two projects, though having little to do with one another, struck a chord with 5th ward residents: Each received more than 70 individual votes, making them the favorites by far.

The popularity of the street lights, despite the fact that they cost more than twice the amount of the next most expensive project, points to a desire for anything that will increase safety in the ward’s most dangerous neighborhoods. Mary Knight, who lives south of Jackson Park, says, “I’m 61 years old and I can’t even walk the streets. They have to do something, because the violence is ridiculous.”

In addition to street lights, Knight voted for the installation of new security and police cameras in ward trouble spots, which turned out to be the sixth most popular project. Gregory Van Tingle, a long-time South Shore resident who also voted for the cameras, says, “We need more cops, but these public safety projects are a step.”

According to Van Tingle, participatory budgeting can also help even out what he sees as an inequitable amount of resources going to the 5th ward’s Hyde Park neighborhood—the home of the University of Chicago. “People in Hyde Park are more vocal, more unified, they have more prominent residents—and they get stuff done,” he says. “I want to see our children grow up and get to be prominent in their own neighborhood.”

At a PB5 wrap-up meeting on May 7, some of the community representatives who have spent hundreds of hours crafting and fine-tuning projects since November expressed disappointment at the low voter turnout. “Democracy is for those who show up,” says Anne Marie Miles. “But I wish more had shown up.”

Around a conference table in 5th ward Alderman Leslie Hairston’s office, the representatives discussed ways to improve the process next year—how to better plan meetings, reach out to their neighbors, and publicize participatory budgeting through local media, block clubs, churches and neighborhood associations.

But they were also proud of what they had accomplished together: successfully completing a budgetary program most had never heard of before last year, working together to navigate the often confusing specifics of getting infrastructure built in the city and voting for unique projects that their alderman might never have thought of on her own.

Maria Hadden, the Participatory Budgeting Project’s Chicago coordinator, who has helped 5th ward residents in every step of this year’s process, says, “It’s easy to fall into the trap of using [voter turnout] as the only measurement of success.”  Nervous about how the representatives would react to the low final numbers, Hadden says she was “pleasantly surprised to see they recognized the whole of what they have accomplished. … Taking the first steps towards identifying a community voice and learning how to use it is measureless.”

“When I’m driving around the city, and I’ll say, ‘Oh, they’re doing this here,’ or ‘They’re doing that there,’ I’ve always wanted to be a ‘they,’” says Angela Sims, an intern with the University of Illinois at Chicago’s College of Urban Planning and Public Affairs, who devoted many hours to PB5. “Communities always have things put upon them. But [participatory budgeting] can bridge the ‘they’ and the community.”

Sims isn't alone in her enthusiasm for the process. After discussing the successes and shortcomings of their first year of participatory budgeting, no one at the wrap-up meeting said their disappointments would keep them from trying again. When Hadden asked who would serve as a representative next year, every person in the room raised their hand.