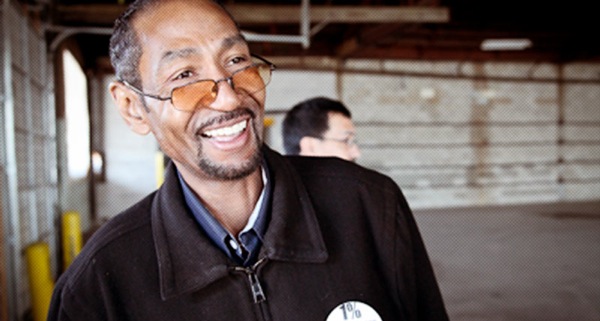 'It’s a lot easier for a worker to become an owner, than an owner to become a worker,' says Melvin 'Ricky' Maclin, a worker-turned-occupier-turned-owner at the New Era Windows Cooperative. (Brendan Martin/The Working World)

A New Era for Worker Ownership, 5 Years in the Making

The New Era Windows Cooperative opens its doors (and windows) for business.

The workers know launching and running a company won’t be easy, but given their deep knowledge of the industry and their personal investment in the project, they are confident they can do it.

Today, in a revamped Campbell’s Soup building in an industrial and residential section of southwest Chicago, the New Era Windows Cooperative will celebrate the grand opening of its new factory.

Becoming a worker-owned cooperative is the latest chapter in the saga of the workers of Republic Windows and Doors, who gained the nation’s attention by occupying their factory—twice—and became a symbol of resistance in the face of corporate corruption and the economic crisis.

The journey to this moment has been a long and rocky one. Right before the December 2008 holidays, with the economy plunging into crisis, unemployment skyrocketing and a cold snowy winter setting in, 300-some workers at the Republic Windows and Doors factory on Goose Island in the Chicago River learned they were about to lose their jobs. Owner Richard Gillman announced that the factory would be closed, leaving workers without the unused vacation pay and severance pay legally due them. And their health insurance would be cut off promptly.

So they occupied their factory in protest, demanding the money they were owed and earning national headlines. The workers cheered when the California company Serious Materials bought the factory and promised to hire everyone back and honor the union contract.

But what followed was a roller coaster of ups and downs. Serious Materials’ business in Chicago never took off, and by early 2012 the company was planning to close and liquidate the factory. Workers staged another occupation, this one resolved more quickly as the owners agreed to give the workers time to raise money to buy the operations themselves. With the help of the New York microfinance group The Working World, they eventually gathered enough money to purchase the factory equipment and rent a less expensive space.

I visited that space on a chilly day in November 2012, when the workers were on the cusp of, in the words of leader Armando Robles, “becoming CEOs.” They had incorporated during the summer and on this day, they were gathered to officially sign the lease on the new factory.

Entering through one of the loading docks, I saw a cavernous space with an array of strange-looking machines with wheels, blades and presses—equipment standing ready to make windows and doors. In an office on the factory floor, about 20 workers were squeezed between a chunky black refrigerator and wire shelves holding four microwaves. They talked excitedly in English and Spanish below a whiteboard with the factory's floor plan and pieces of butcher paper with bilingual lists of tasks.

The tight-knit group of men and women, comprised of Latino immigrants and African Americans, discussed logistics like insurance, electric wiring, the location for the permanent office and the restrooms, and the number of heating units they’d need during the coming winter. They debated whether to elevate the air compressors on a platform, to cut down on noise and open up more space, and how to locate the office so visitors would not need to walk through the factory without safety goggles. Such pragmatic details come naturally to them, familiar as they are with the inner workings of a window and door factory. All had worked at Republic Windows and its successor for between one and three decades.

The workers know launching and running a company won’t be easy, but given their deep knowledge of the industry and their personal investment in the project, they are confident they can do it. Many of them spent last summer taking business management classes at the union hall of the United Electrical, Radio and Machine Workers of America (UE)—the progressive union that the workers have belonged to throughout their journey.

“The incredible thing is the ownership they already feel,” noted Brendan Martin, the president and founder of The Working World, which invested in New Era and advised the group.

Martin, who acted as an informal facilitator during the November meeting, has spent seven years in Argentina working with cooperatives. He says he has seen few co-ops or businesses as promising as New Era. The project was well under budget, Martin noted, thanks in part to the worker-owners’ personal hard work and commitment. For example, they spent long hours in the fall moving almost all the equipment and inventory themselves from Goose Island seven miles to the northeast, spending just $18,000 instead of the $100,000 originally planned.

“They're doing an incredible job—it shows that when workers have true control they can do things like finding ways to save costs,” he said. “They aren't just the raw material; they are the protagonists. They’re making capital work for people, not people work for capital.”

As the meeting wound down, Robles pulled a dark bottle of liquor out of the refrigerator, and someone found a stack of shot glasses. It was an almond concoction Robles had brought back from his recent trip to his native Mexico to visit workers’ cooperatives on a strip known as the “Road of Co-ops” near Mexico City. Along with numerous co-ops, he visited a sandal factory where workers have been on strike for two years. The owner was trying to get the government to declare the strike illegal, which would deny workers the strike pay they otherwise are due under Mexican labor law, Robles explained. The sandal workers will likely form a co-op.

He also visited a building co-operative in Mexico; he dreams New Era could sell them windows and doors. Though he knows there would be a lot of logistical and cost issues involving the border, it would be a powerful statement.

“I saw how people did these different things to survive,” said Robles with a touch of awe in his voice, even as he helps lead a similar struggle. “Instead of working for someone, they create these things of their own.”

The workers passed around the liquor and toasted to New Era. Then it was time to go sign the five-year lease on this space, making it truly their own. They filed upstairs to a lushly decorated office, smelling of perfume, where they greeted the building owner. The group makes decisions collectively, so in the meeting they voted on who would actually sign the lease on behalf of the cooperative. However, everyone received their own copy and read it over before the signing.

Waiting on the couches in the office lobby, Robles fooled around and told the more reserved workers, “You can talk, it’s not like church!” Robles and coworker Melvin “Ricky” Maclin noted that their company does not have a president or a hierarchical structure; they will all be owners. “It’s a lot easier for a worker to become an owner, than an owner to become a worker,” laughed Maclin.

“Some people thought we were crazy, but we did it,” said Robles, who was wearing a “Troublemakers” T-shirt from the 2012 LaborNotes conference in Chicago.

Maclin said it was no accident that the workers around the table waiting to sign the lease had stuck together through various ups and downs. The bonds they’ve formed over the years will be the bedrock of the success of New Era, he said.

“When you have a cooperative it’s not just about your skills. You have to really get along, have the ability to work together. You’re like a family.”