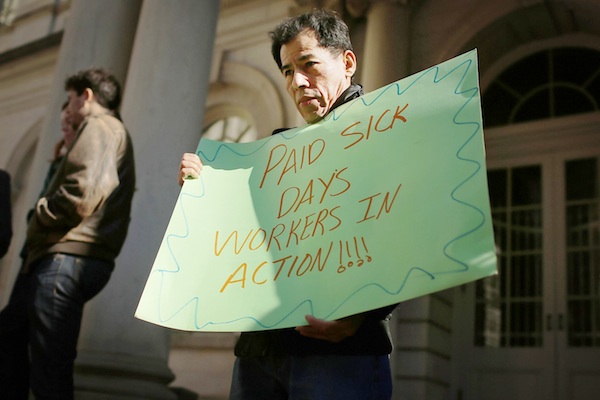 On March 29, a man holds a sign at a rally in front of City Hall to show support for a paid sick leave bill in New York City.

The Right to Call In Sick

'I see employees run to the bathroom because they’re throwing up, but a manager doesn’t send them home.'

“I’ve gone to work horribly ill many times,” says Susan Lund, a grocery worker in Portland, Ore. “[Bosses] don’t care, as long as the work is being done. I see employees run to the bathroom because they’re throwing up, but a manager doesn’t send them home.”

That won’t be true for long. On March 13, thanks to the activism of thousands of Portlanders like Lund, the City Council unanimously voted to adopt a paid sick days ordinance. The bill goes into effect in January 2014.

Two weeks later, the New York City Council made a deal for a similar measure, guaranteeing paid sick days for 800,000 workers in firms of 20 employees or more, with job protection for those in smaller firms who have to take off for family illness. Together, the victories gave a big boost to the nationwide movement for paid sick leave. Portland and New York join a growing list of places—San Francisco; Washington, D.C.; Seattle; the state of Connecticut—where most workers are guaranteed a set number of paid days off for illness and hardships such as domestic or sexual violence. Similar campaigns are underway in a dozen other cities and states, including Oregon, Massachusetts and Vermont, and support is building for the Healthy Families Act, which would create a national standard.

In each location, the movement for paid sick days is backed by a broad coalition that includes dozens of partners from labor (including unions like UFCW and AFSCME, and Working America and the Working Families Party) together with small-business owners and groups that advocate for women, children, seniors, public health, racial justice and LGBT rights (Portland’s coalition is a member of the Family Values @ Work Consortium, a network of 21 state coalitions working for policies like paid sick days, of which I serve as executive director). But what’s most notable is how these groups have engaged new activists like Lund, who hadn’t been politically active before, but who share the common experience of fearing for their jobs if they or their child gets sick.

Lund says she “tripped into” activism after being asked to speak on the radio by a coalition leader about her 15 years of experience working for Fred Meyer, a superstore owned by Kroger, the nation’s largest traditional grocery chain, with sales of more than $90 billion in 2012. Though Fred Meyer does offer paid sick days, Lund says, workers don’t get paid unless they’re out for at least three days, and then only for day three and after—a phenomenon typical in grocery stores across the county, even unionized ones like Fred Meyer. Lund describes the loss of pay as “the difference between grocery shopping or not, paying my rent or not.” She agreed to do the Think Out Loud interview on Oregon Public Broadcasting (an NPR affiliate) for herself and her two kids, and for everyone she knew in the same boat.

“I wanted to get the message out about all of us trying to balance being moms and paying bills,” she says. After the interview, she
got involved in the paid sick days campaign, sharing her story with the press, speaking out at hearings and getting other UFCW members involved.

Lund knew it would be difficult to overcome the well-funded opposition. The Northwest Grocery Association, the OregonRestaurant & Lodging Association and the Portland Business Alliance dominated the corporate juggernaut that lobbied against the bill. But ultimately, the sick days coalition prevailed by having an energetic presence in the field—they knocked on more than 40,000 doors around the city to engage voters in the campaign and in rallies, talked early and often to City Council members and made use of unassailable spokes-people from a wide variety of groups including teachers, nurses, public health officials and anti-violence advocates.

“It’s like the stars aligned and people pulled together, one person joining another and another, and everyone saying this isn’t the way it should be,” says Lund.


Now, Lund is active in the campaign for a state bill. “It’s not a luxury that we’re asking for,” she says. “It’s not just people who have the money who should be able to [get paid sick days].”

Corporate lobbyists and their conservative collaborators will continue to oppose fair work-family policies. But one person will keep joining another and another, building strength in broad and diverse local coalitions, all of them increasingly linked into a powerful national movement.

Ellen Bravo directs the Family Values @ Work Consortium, a network of 21 state coalitions working for policies such as paid sick days and family leave insurance. Before helping start FV@W, Ellen was the director of 9to5. Her most recent book is Taking on the Big Boys, or Why Feminism is Good for Families, Business and the Nation.