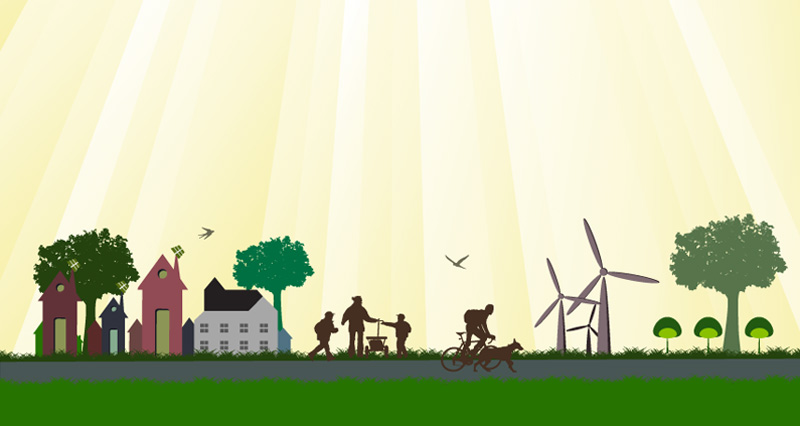 A small town in upstate New York rallies in the face of environmental disaster.

Katryna Barber, a member of the Woodstock Initiating Group, said in the build-up to the festival, 'Transition is like when you’re a kid with your friends and you decide to make a circus. The energy level is so exciting and inviting that more kids want to join you!'

I was away from home on Aug. 29, 2011, when Hurricane Irene cut a devastating path inland through New York state and into Vermont, leaving a deep, impassable ditch across my road, south of Woodstock, N.Y. When I returned, I learned that men who had never before said more than a passing “hello” to each other had labored for hours piling rocks into the ditch, finally enabling the traffic to flow. They remarked on how unusual and pleasurable the experience was. All over the Hudson Valley, people came forward and did what they could for the victims of the storm, donating food and clothing to people whose homes had been washed away.

It was pure coincidence—or synchronicity—that Hurricane Irene came along just as the Transition Town movement was taking root in Woodstock. But Irene gave the nascent movement a push by providing both evidence that environmental crises are escalating and a template for neighborly cooperation. Such cooperation lies at the heart of the Transition movement, which is guided by the philosophy, “If we wait for the government, it’ll be too late. If we act as individuals, it’ll be too little. But if we act as communities, it might just be enough, just in time.”

I first joined the movement in June 2011, when I participated in a two-day Training for Transition in the mid-Hudson Valley. Seven participants from the Woodstock area and I went on to form the Woodstock Transition Initiating Group, a body that was planned from the outset to dissolve, so that people would not become attached to leadership positions. Transition rests on a very serious commitment to growing through a non-hierarchical, leaderless—or to put it another way, leader-full—process.

This does not mean deciding everything by consensus (we have instituted a supermajority 2/3 vote for contentious matters), but it does mean being supremely mindful of how we treat one another. For example, when one of our members wrote a somewhat “scolding” email to the group about people not following through on commitments, he followed up with a heartfelt apology for his tone. This sort of sensitivity is palpable in the face-to-face meetings as well. Coming out of the sometimes brutally argumentative and un-self-conscious anti-war and women’s movements of the late ’60s and early ’70s, this process has given me hope that we have learned something as a culture—or at least as a counter-culture—about how to function healthily in groups.

Following the guidelines of founder Rob Hopkins’ Transition Handbook, we held “public awareness” meetings for a year to build interest in the movement. Woodstock’s meeting topics included water, food sustainability, winterization, waste management, tool exchange, permaculture, seed swap and the new economy. We publicized these meetings through email and ads in local papers and magazines. In the spring of 2012, Woodstock became the 115th official Transition Town in the United States.

The meetings culminated in the Woodstock Transition Festival on Sept. 22, 2012, underwritten by local businesses and attended by more than 200 people. In the Big Tent, we honored the town’s elders and those who had made sustainability central to their missions. Two Woodstock residents, Jill Olesker and Jo Schwartz, have been interviewing elders in the town to document what Woodstock has lost as it has turned from farming community to tourist destination. They both spoke at the Festival, and Jo recalled former farmer Macky Carnwright, a man in his 80s, telling her that farmers used to go over to one another’s farms to help each other butcher hogs and cattle. It’s this spirit of community that the Transition movement is helping to revive.

Our September gathering served as what they call in the U.K. the “great unleashing,” when the initiating group dissolves and the broader community is engaged and enlisted. Approximately 50 people signed up to be in working groups to bring the Woodstock Transition into fruition.

A few of us from the initiating group, as well as several others, started meeting weekly as an administrative group, calling ourselves simply the Wednesday Night Group so as to dispel any notion that we aimed to stay in charge of things in the future, and proceeded to develop structures to support the Woodstock Transition and its working groups going forward. Anyone can attend these meetings. Attendees self-select one of three levels of involvement—core, supporter or observer—but these roles are mutable. A few people over the past six months began attending our meetings as observers, then as supporters, and then realized they were deeply enough involved to switch to identifying as core members.

The working groups are in various stages of formation. We have been very deliberate in setting up all these structures, not rushing, because we know we are in this for the long haul. Ultimately, the Transition movement is not about changing the world so much as changing oneself and one’s community to prepare for inevitable catastrophic shifts. A major precept of the movement is that the escalating crises of peak oil, climate change and economic instability will eventually topple our capitalist-industrialist society. The goal is neither to stop this nor to accelerate it, but to learn resilience. As Pamela Boyce Simms, Mid-Atlantic Transition Hub coordinator, explains, “We’re not Davids, shooting arrows at Goliath. Instead, we’re standing aside and lighting little tiny flickering flames of alternative economies, so when Goliath falls, we’ll be more ready, and perhaps our flames will comingle.”

This is the bare outline. What it does not convey is the almost magical enthusiasm the movement evokes in its participants. Katryna Barber, a member of the Woodstock Initiating Group, said in the build-up to the festival, “Transition is like when you’re a kid with your friends and you decide to make a circus. The energy level is so exciting and inviting that more kids want to join you!”