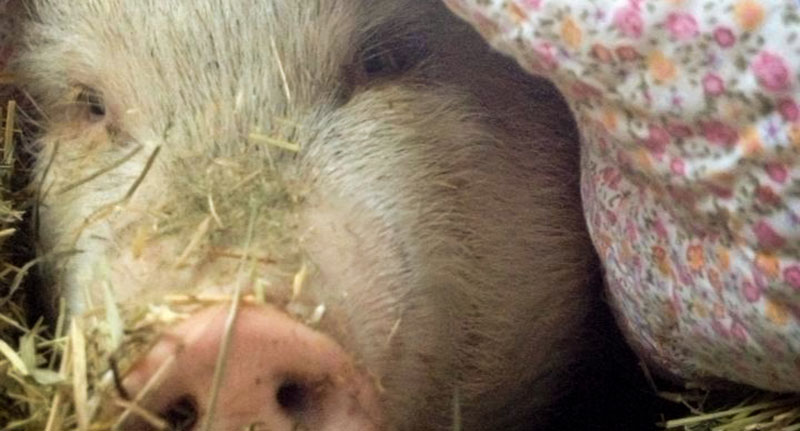 Lola snuggles up in her blankie at Heartland Farm Sanctuary in Verona, Wis. (Photo courtesy of Sarah Solberg)

What is most likely to make people go vegetarian?

But despite successes like this, Americans continue to consume vast quantities of meat–an average of 270 pounds per person each year.

Last summer, the animal-rights group Compassion Over Killing released an undercover video filmed inside a California slaughterhouse. It contained graphic evidence of the way cows are treated on the way to slaughter, including an incident in which a worker stepped on the mouth and nose of a fallen cow, suffocating it. That was probably the least gruesome scene. In the wake of the video’s release, federal regulators shut the facility down for a week, until the company promised to provide better training for workers in the “humane” treatment of animals.

Previously, Compassion Over Killing had released a video shot inside a pig breeding factory farm in Iowa. Its investigation found pigs being confined in gestation crates so small that the animals are unable even to turn around; workers “repairing” the herniated intestines of pigs with tape; and pigs being fed a gruel that consisted of the intestines of dead pigs.

Iowa has among the highest concentration of factory farms in the United States, and it’s the nation’s leading pork producer. Stung by the exposé, in 2012 the Iowa General Assembly passed “ag-gag” legislation that made it a crime to obtain access to farming facilities on false pretenses—by lying on a job application, for example. The bill passed both chambers of the legislature with overwhelming support.

Several states have recently passed or are now debating their own form of ag-gag legislation. Utah and Missouri passed ag-gag bills in 2012, and about 10 states have considered such bills this year. (Three states—Kansas, Montana and North Dakota—passed ag-gag legislation in the early 1990s.) The American Legislative Exchange Council, a notorious tool of corporate interests, has played a key role in crafting them.

Hidden-camera videos that expose animal abuse within the meat, dairy and poultry industries have had some success in raising public awareness, and have even helped to change corporate behavior. Last year, for example, McDonald’s announced that by 2022 it will buy pork only from farms that don’t use the kind of gestation crates exposed in Compassion Over Killing’s pig breeding video.

But despite successes like this, Americans continue to consume vast quantities of meat—an average of 270 pounds per person each year. Globally, the per capita average is 102.5 pounds.

Given the central role factory-farmed meat plays in the American diet, it’s not surprising that when confronted with the brutality of the system that puts cheap meat on their plates, many people would rather look away. So while the makers of undercover videos aim to change corporate and consumer behavior through shock value, other animal-rights activists are taking a different approach, focusing not on the horrors of slaughterhouses and breeding farms, but on the inherent worth of farm animals. They do so by founding animal sanctuaries.

Sanctuaries provide a permanent home for animals who have been abused, abandoned or given up by their owners, or are simply lost. The total number in the U.S. is relatively low—in the dozens—and the majority have been founded since the mid-1990s. Sanctuaries vary widely in the scope of their operations. Some are devoted to a single species, such as goats or chickens, while some take in a wide variety of animals. Some provide a home for just a few dozen animals; others are home to hundreds. Nearly all of them have an educational mission, and many can also be community-building endeavors.

Heartland Farm Sanctuary in Verona, Wis., is one example. Founded in 2009, it’s home to more than 60 animals, including pigs, chickens, ducks, llamas, horses and goats. Like many sanctuaries, Heartland posts profiles of its residents on its website (and invites readers to sponsor an individual animal with a $20 monthly donation). Beatrice, for example, is described as a large, friendly black hog who enjoys belly rubs and “was found rooting up a garden in Milwaukee with her sister, Maxine.”

Heartland’s work in Wisconsin has led it to partner with schools, youth groups, animal shelters, assisted living and senior centers, museums and even a local coffee roaster. This potential for building stronger connections between people through the shared work of caring for animals is reflected in the organization’s mission to “foster respect and kindness toward animals and each other.”