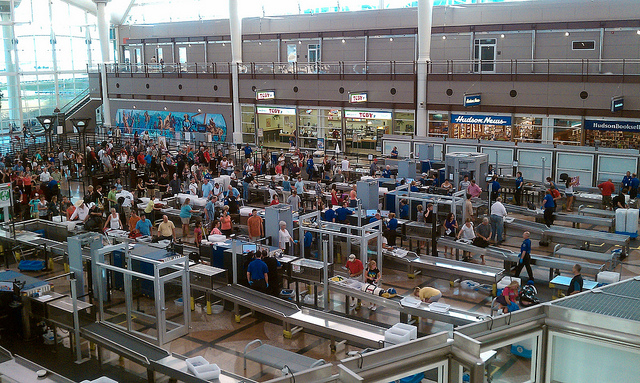 Extreme security at airports is only one cog in a vast U.S. surveillance machine that citizens have come to accept. (Quinn Dombrowski / Flickr / Creative Commons).

Privacy Is Lost, and We Are All To Blame

Where will the next generation of Americans draw the line on surveillance?

Every generation needs to grapple with and find the balance between national security and civil liberties, now more than ever.

When full-body scanners were introduced at American airports three years ago, there was a brief public outcry. But just as quickly, it died down. Travelers interviewed shrugged off the loss of privacy in the name of safety, using terms like “trade-off” and “compromise.”  One frequent traveler seemed to sum up the general attitude when he said he’d grown “immune to the procedures.”

In other words, Americans don’t want to be groped or scanned, don’t want our personal spaces invaded, but we’re willing to endure both in the name of security. Such is the contract between the people and the state in the new, post-9/11 America.

At airports, it is understood that you’re not allowed to exercise your rights—the Second Amendment explicitly and the First implicitly. It’s common sense that you don’t ever carry a gun on a plane. And since 9/11, don’t even think of saying the word “bomb” to a TSA agent, even if it’s a joke. Travelers have been routinely detained for doing just that. Passengers have even been kicked off planes for wearing t-shirts that were deemed offensive. One passenger was removed for wearing a shirt with an Arabic inscription that said, ironically, “We Will Not Be Silent.” He later sued Jet Blue and the two TSA screeners and won.

How you dress and what you say can be used against you at airports, where scanners and cameras and security guards are aplenty, and where you are constantly being monitored.

But what if, in the name of security, you were willing to give up more rights, not just at the airport, but everywhere else? What if the whole country were to slowly become a kind of mega-airport, a place where you had to watch your language and restrict your communication activities, all under the watchful, electronic eye of Uncle Sam?

That is increasingly becoming the scenario in America today, as the story of Edward Snowden versus the National Security Agency unfolds.

Snowden blew the whistle on PRISM, a government program that collects enormous amounts of data from the phone and Internet records of Americans, as well as others living outside of the U.S. Though PRISM’s existence has been known about for years, the sheer amount of data being mined is revelatory– 3 billion pieces of intelligence were culled from the computer networks of U.S. residents in March of 2013 alone.

Snowden is now on the run from authorities in the U.S., who want him tried for treason.

But even as Americans worry that their personal communication records are being monitored without their consent, many say that the spying works as a deterrent for terrorism attacks, according to a recent USA Today/Pew Research poll. Americans surveyed were more or less split (48 to 47 percent) on whether they approve or disapprove of such programs as part of the nation’s anti-terrorism effort. Yet, more than half (53 percent) of those surveyed also said government spying programs help prevent terrorist attacks. And a slight majority (54 percent) felt that Snowden should be criminally prosecuted.

Overall, instead of outrage there’s a feeling of resignation in the air, as the story of Snowden versus the NSA unfolds. On twitter, the resignation often manifests as humor:

#NSACalledToTellMe What Happens in Vegas, stays in our Utah data center.

#NSACalledToTellMe that next time a politician says “I am listening to YOU” they really mean it.

We can hear you now. ‪#NSACalledToTellMe‬‬‬‬‬‬‬‬‬‬

Part of the problem is that privacy isn’t what it once was. Diaries once kept locked in one’s drawer have become blogs for all to see. The domestic doings of private citizens are often captured in the raw on Youtube and Vimeo, as if their lives are reality TV shows. If Americans are wary that we are being constantly monitored, we, too, are guilty of divulging our secrets—we make spying on us an easy task. Between our urge to tweet opinions, our impulse to photograph meals on Instagram, our need to share every sorrow and update our every move on Facebook, we have more or less become an open book. In essence, we volunteer information about ourselves as habit. And the way technology is going, with social media increasingly becoming an integral part of our daily communication, #privacy is not to be had, #imsorrytosay.

Spying, too, is no longer the business of government agencies. Increasingly, tracking is done not by various companies and organizations but by individuals. Shopping malls monitor your shopping patterns by tracking your cell phone. Advertisers target individuals based on their interests, a seemingly personal touch accomplished by sophisticated, impersonal software. Self-tracking, too, is increasing. There are wireless devices that can track people's physical activities, while other devices can measure brainwave activity at night to chart people's sleep patterns online. And as drones are becoming smaller and smaller, it is only a matter of time before feuding neighbors or distrusting spouses can spy on one another using this technology, a kind of Mr. and Mrs. Smith writ large.

Privacy issues aside, in the post 9/11 era Americans live with a new set of norms. Mass deportation of undocumented immigrants who toil on our land has become the new norm, and despite talks of reform, those without proper papers continue to get swept up in wide sweeping government dragnets. The new norm allows careful surveillance of Muslim communities and many don't mention certain words like “jihad” or “bomb” on the phone, out of fear it might trigger investigation. Since they are being heavily monitored, some Arab Americans have invented roundabout ways to refer to their own children or relatives who have common names like Osama or Saddam.

Abroad, this new norm allows the U.S. to wage war overseas in perpetuity, in the name of national security, and with the right to preemptive strikes. We have accepted torture in the form of waterboarding, and the practice of kidnapping foreign citizens for interrogation (we call it extraordinary rendition), all while our drones in the sky routinely assassinate potential enemies and innocent victims who just happened to end up in our target range (we call them “collateral damage.”)

The new norm also keeps our so-called “enemy combatants” in an offshore prison named Guantanamo and refuses their human rights and due process. In essence, they are serving life sentences without trials. When they go on hunger strikes, they are force-fed.

So is Snowden a hero or a traitor? On the one hand, by taking classified information that could harm the U.S. and then fleeing abroad—to Hong Kong, then Russia—he seems less heroic than self-preserving, especially for someone who says they want to bring about social change. (By contrast, whistle blower Daniel Ellsberg of Pentagon Papers fame stuck around and dealt with the consequences.) On the other hand, Snowden made Americans look at something from which we had learned to look away—internal government procedures to which we feel immune, until those procedures are spelled out in stark and dreadful terms, and we don’t like what we see.

Every generation needs to grapple with and find the balance between national security and civil liberties, now more than ever. Democracy, after all, cannot possibly survive when the citizenry continues to cow behind draconian policies that override civil liberties in the name of the war on terror.

That Snowden pulled back the curtain and showed us the inner workings of the spy machinery should be a wake up call. But for now, that doesn't seem to be the case. In Dante’s Divine Comedy there is a phrase that inscribed above the gate of hell that says, “Abandon all hope, ye who enter here.” If you replace the word “hope” with “rights” it could be hung above the entrances of American airports. What’s worrisome is that as more and more Americans weigh in on the side of safety over civil liberties, that phrase might end up hanging above the Exit signs.