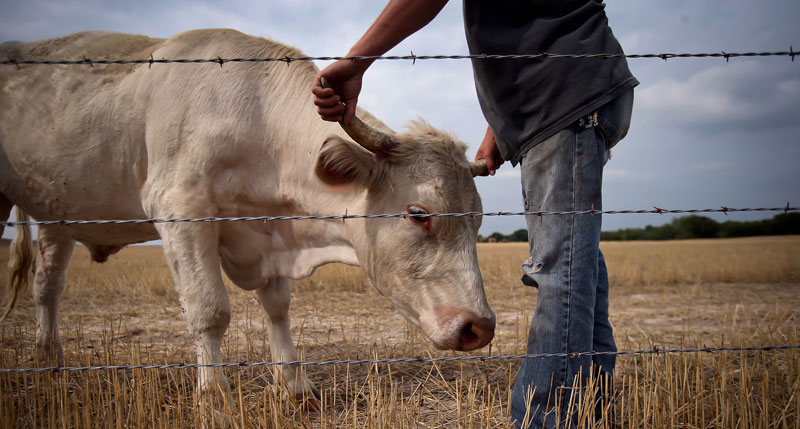 In Logan, Kan., Charlie Becker grabs a steer by the horns as the animal grazes on dry wheat husks during the drought of August 2012. (John Moore/Getty Images)

The drought, which has eased somewhat but lingers in much of Kansas, is both a mirror of our global predicament and a warning about our collective future.

If any problem is potent enough to overcome conservatives’ animus against government, it might be water scarcity. To paraphrase Samuel Johnson, fear of death focuses the mind wonderfully.

Red states across the Midwest, Southwest and Great Plains glimpsed the demise of their way of life during last year’s drought, the worst in half a century. By August 2012, 43 percent of U.S. farms—encompassing nearly 60 percent of all U.S. cropland—were under “severe” drought conditions or worse according to USDA statistics. By September, more than 2,000 counties had been declared disaster areas.

The drought, which has eased somewhat but lingers in much of Kansas, is both a mirror of our global predicament and a warning about our collective future. The earth’s population is expected to grow by as many as 3 billion people by 2050, which translates into a 70 percent increase in food demand, according to UN statistics. Agriculture is by far the greatest drain on global water supplies, consuming nearly three-fourths of freshwater “withdrawals.” So the rapidly growing population will require ever-greater freshwater resources.

Yet it isn’t clear where that water will come from. And the problem of water scarcity is compounded by global warming, which is expected to increase the frequency and severity of droughts.

Even conservatives who are skeptical of environmental initiatives can see the logic of a public policy that addresses the problem.

In his State of the State speech last year (delivered before the worst of the drought), ultra-conservative Kansas Gov. Sam Brownback, said that it was “way past time we move from a development policy with our water to a conservation ethic,” since “we have no future without water.”

One short-sighted solution to the problem of water scarcity is for states—and nations—to wage legal and rhetorical battles for access to water sources of neighboring states.

Tennessee and Georgia are fighting over the Tennessee River. Politicians in Georgia claim that the border between the states was drawn incorrectly in the early 19th century and that a bend in the Tennessee River should lie within Georgia’s borders, giving it the right to divert water down to Atlanta.

Texas is engaged in water fights with both Oklahoma and New Mexico. The latter’s attorney general recently accused Texas of “trying to rustle New Mexico’s water and using a lawsuit to extort an agreement that would only benefit Texas while destroying water resources for hundreds of thousands of New Mexicans.”

But if water scarcity means that such conflicts are inevitable, there is another possibility: The gravity of the problem will foster collaborative efforts within and among communities. To that end, the UN has declared 2013 “the international year of water cooperation.” Several related events are scheduled, including “world water week” in September. Organized by the Stockholm International Water Institute, the event will convene “2,500 experts, practitioners, decision-makers and business innovators from around the globe to exchange ideas, foster new thinking and develop solutions.”

Many of the new solutions will come from experiments at the local level. Texas is home to one of the most innovative and effective civic experiments in the United States: the San Antonio Water System (SAWS). Under SAWS, formed in 1992, San Antonio has implemented innovative wastewater recycling techniques, and the city delivers recycled water to commercial and industrial customers, as well as parks and golf courses, through a 110-mile network of pipelines.

But the heart of SAWS is an array of programs that aggressively promote conservation. The city determined, for example, that about one-fourth of the water consumed in San Antonio goes to landscaping. Much of this consumption is by heavy users who over-water. In response, SAWS organized a series of workshops and events to educate people about the amount of water wasted by poor landscaping techniques, and it mounted a communications campaign that enlisted the help of local newspapers and radio talk shows. SAWS has also partnered with the San Antonio Botanical Garden to create an exhibit that models water-saving landscapes. Five such garden styles are contrasted with the traditional, water-intensive American landscape.

Key to the success of SAWS has been the city’s Community Conservation Committee, which “generates conservation program ideas and helps build support for those programs.” It includes members from local businesses, non-profits and neighborhood groups. The net result of SAWS is that San Antonio uses about the same amount of water now as it did in 1984, though its population has grown by two-thirds.

Even conservatives in the ruby-red Texas legislature are impressed. Though they’re in denial about climate change, they can’t ignore the fact that their state has been blistered by the recent drought. In April, the Texas House of Representatives approved a resolution honoring SAWS, which “has become a model for progressive and effective water conservation and is recognized throughout not only our state, but the entire nation,” according to Rep. Lyle Larson (R-San Antonio), who sponsored the resolution. “SAWS is consistently at the forefront of technology and community engagement in an effort to minimize water use,” he said, and it is “a testament to a water system taking responsibility for a precious resource that’s important to all Texans.”