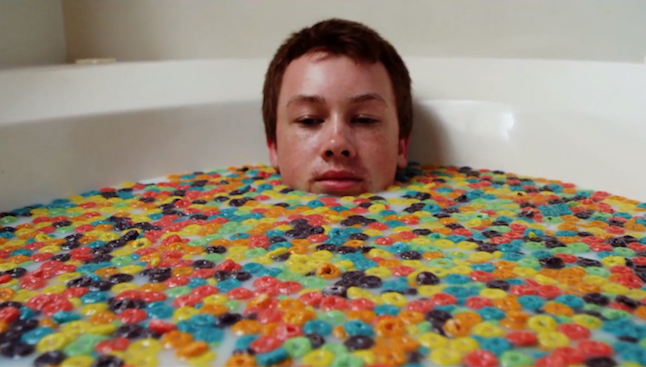 The Pixies Enter the Realm of the Man-Child

The alt-rock pioneers flirt with misogyny and racism in ‘Bagboy,’ and almost no one has a problem with that.

Either we will get angry at the racialized violence toward a woman, in which case we will be silly and square and guilty of embarrassingly public commitment, or we will stay quiet and assume 'irony,' in which case we 'get it' and remain cool.

At long last, the Pixies reunion is upon us. And with it, the all-important question: Can a bunch of middle-aged indie musicians still piss anyone off?

When it comes to the video for their latest single, “Bagboy,”—their first since 2004, and their first ever since the departure of bassist Kim Deal—the answer is a qualified, but disappointing, “yes.” The clip, directed by duo Lamar + Nik, seems aimed to capture the adolescent high spirits of any given 35-year-old white man who spent his youth jamming out to the Pixies. An unsavory-looking youth—whose rapidly-developing peach-fuzz mustache alone is enough to give you flashbacks to your worst eighth-grade dance partner—goes on a rampage through a well-appointed suburban home. The violence is shot to look childlike, even magical: He sets off rainbow-colored smoke bombs, plays the drums with fine china, fills rooms with balloons and soap bubbles, and bathes in Froot Loops. And then, as the video fades out, we pan away from the wreckage to find—surprise!—a black woman, tied up, in her bedroom.

Lamar has responded to a Hooded Utilitarian blog post criticizing the video by pointing out that the woman in the video is his sister (and that the young man is Nik's brother). He rejects the idea that the video has any racist or misogynist connotations: “I, myself, being black have gotten to the point where I don’t automatically see color in people.”

Our hope was that people would see the video for what it is. It’s a story about a kid getting to do what he wants with a credit card and no supervision, with a twist. It doesn’t matter if he’s black, white, hispanic, Native American or Indian, he’d still be doing the same activities. In the video he’s playing with bubbles, balloons, and soaking in a giant cereal bowl these are pretty light-hearted activities.

It's not my place to tell Lamar what his experiences are, or should be. But this is a pretty weak dodge. Bodies in an oppressive society carry meaning: Showing a woman tied up in her bedroom by a man has an unavoidable significance in rape culture, and showing a white person destroying a black person's house has an unavoidable significance in a society where property destruction has historically been high on the list of favored tactics in white racial violence. And the vaguely contemptuous lyrics—“migrations of their type are such good planners and not smug,” Frank Black intones at one point, as the back-up singers repeat their exhortations to “cover your breath, polish your speech”—while probably purposefully nonsensical, add a distinctively ugly undertone.

Furthermore, by defending the protagonist's activities as “light-hearted,” Lamar essentially deprives the video of its one plausible saving throw: The idea that all that lovingly shot, candy-colored violence against a black woman is “ironic,” or that the last shot is intended to make the audience re-contextualize and retroactively condemn the boy's activities. In this case, (one of) the directors has spoken to tell us what we're supposed to think of the violence inflicted on the woman. We're supposed to think that it's just a kid having fun.

In his (excellent) piece on the video, Noah Berlatsky points to the lack of critical furor surrounding the video, comparing it to the trend pieces on the misogyny in Kanye West's Yeezus.

“Misogyny in rap too often gets a pass from critics,” Berlatsky writes. “But at least there is an active, ongoing discussion about how male hip hop artists use violence against women to solidify their edginess and cool. Rock performers, and even alternative rock performers, have been doing the same thing for decades, and folks just tend to shrug.”

Berlatsky goes on to imagine a parallel video from West depicting violence against a woman in similarly graphic terms, hypothesizes that it would be quickly picked up, analyzed in context, and called out. In fact, there's no need for hypothesizing: One need only look to the video for “Monster,” in which West lounged in bed with a pair of freshly killed supermodels, performing one verse while holding a woman's decapitated head. The video was widely decried even before it was officially released and eventually had to be issued with a disclaimer: “The following content is in no way to be interpreted as misogynistic or negative towards any groups of people. It is an art piece and it shall be taken as such.” There's been no similar official disclaimer, outside of a blog comment, from the Pixies' camp – nor has there been the sort of public pressure that might result in the need for one.

Berlatsky is correct that the relative absence of response in “Bagboy” points to an ugly racial dynamic in how we process violence toward women—one which slips, all too inexorably, toward processing real-life violence differently when it comes from different men. Black male musicians who are accused of domestic violence become punch lines: Chris Brown, Ike Turner. If a discussion about domestic violence and music turns to Martin Crandall of The Shins (accused of battering his girlfriend in 2008), Axl Rose (accused by three different women), or John Lennon (who confessed to domestic violence, sometimes in song, it's a surprise. But it also points to the social context in which The Pixies exist: One in which any strong emotional response, let alone a response as self-exposing and socially inconvenient as outrage, is taboo.

As it happens, “Bagboy” hit the scene at about the same time as a great essay in the New Inquiry by Moira Weigel and Mal Ahern. Weigel and Ahern point out the casual sexism in both radical leftist theory and various cultural institutions—publishing, art, humanities departments—that, like indie rock, are assumed to be too deeply sophisticated, intelligent, and drenched in inherited class and race privilege to be sexist or racist. (Authentic prejudice, of course, is usually assigned to “uncultured,” presumably non-wealthy Others, with misogyny being a problem for men of color, racism being a problem for “rednecks,” and the utterly nonsensical nature of using prejudice as a means to deny prejudice being a problem for, apparently, no-one.) In a long and very funny passage, they speak to a generation of men that fears commitment—political, personal, even merely verbal—too deeply to allow themselves to “mean” anything, which falls back on privilege-as-performance out of a lack of something true or useful to say:

The Man-Child wants you to know that you should not take him too seriously, except when you should. At any given moment, he wants to you to take him only as seriously as he wants to be taken. When he offends you, he was kidding. When he means it, he means it. What he says goes. … If the Man-Child could use his ironic sexism to build a new world, would you want to live in it? Would anyone?

All of which is to say that the “cool” of the Pixies video—which, like the Tiqqun pamphlets that Ahern and Weigel lampoon, remains stuck firmly in the flannel-clad heart of the '90s—depends, to some degree, on both its outrageousness and on our lack of outrage. Either we will get angry at the racialized violence toward a woman, in which case we will be silly and square and guilty of embarrassingly public commitment, or we will stay quiet and assume “irony,” in which case we “get it” and remain cool. It's an adolescent provocation roughly as thoughtful as any given Marilyn Manson video, and it depends on our commitment to earning social capital with silence. The Pixies and Lamar + Nik have no need to demonstrate their sophistication by proving that they don't see black women as disposable victims; instead, we have to assume that they don't, in order to demonstrate ours. Keeping quiet when their actions seem to indicate otherwise is how we confirm our membership in their club.

Weigel and Ahern may be right that the Man-Child has outlived his era of cultural dominance. But the question remains: When the Old Gods of Indie Rock (or sexist left theorists, or comedians who mock rape victims, or any other group that routinely falls back on aggravation as innovation) do offensive things, will they make us angry? And, if so, at what point does that start to be their problem for trying, instead of ours for speaking up?