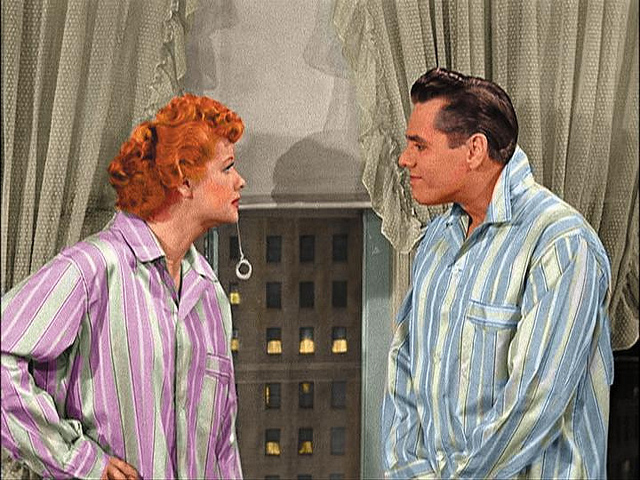 The GOP must really love Ricky Ricardo, the husband of Lucille Ball's title character in the 1950's show “I Love Lucy.” Just like the famously chauvinist Ricky, the party apparently thinks women are empty-headed twits.

Women are so vacuous, right-wingers figure, that they don’t understand how Obamacare benefits them and their families, so they’ll be easily swayed by an Obamacare smear ad that features a lovely young actress named “Julie.”

The ads, $1 million worth of them, are running during television shows popular with women. In the spots, “Julie” says she began paying more attention to healthcare after her son suffered seizures. But, “Julie” says, she has a lot of questions about how Obamacare will work. In the ad, the young mother sits wondering—paralyzed by confusion—because the GOP believes women are incapable of finding that information themselves. “How will Obamacare impact your family?” the ad ends by asking. The GOP is banking on women being too daft to know the answer.

The GOP is certain women are just so silly that they’re unaware that Obamacare means they get birth control and preventative care like annual ob-gyn check-ups without co-pays.

The Republican Party just knows women couldn’t possibly have absorbed the fact that Obamacare is the reason insurers can no longer charge them more than men.

The GOP is positive that women never learned that Obamacare prevents insurance companies from dropping policy holders when they get sick, like “Julie’s” seizure-stricken son in the Americans for the Prosperous commercial.

The Republican Party is darn tootin’ sure that women never found out that Obamacare ended the lifetime limits that insurance companies had devised to enable them to squirm out of providing care for people with high-cost chronic illnesses, conditions like the seizure disorder suffered by “Julie’s” son in the Americans for the Prosperous commercial.

The GOP has convinced itself that women are so harebrained that they’re unaware that Republicans in Congress voted 37 times to take all of those benefits away from women and their families.

Female-voice deafness explains why Republican members of the U.S. House conducted a hearing on birth control last year at which they allowed only men to testify. The GOP couldn’t hear women’s voices, so what would be the point of calling female witnesses to talk about women’s health?

Female-voice deafness explains why the GOP has such dangerous ideas about rape and conception. The GOP just can’t hear the words coming out of the mouths of sobbing pregnant 12-year-old incest victims.

So, of course, former U.S. Rep. Todd Akin believes that if a woman is the victim of a legitimate rape (would he consider incest legitimate or illegitimate?) “the female body has ways to try to shut that whole thing (conception) down.”

So, of course, Republican U.S. Senate candidate Richard Mourdock of Indiana contended in a debate last year that pregnancies resulting from rape are “something that God intended to happen.”

So, of course, as Republican lawmakers tried to restrict abortion out of existence in Texas last month, without providing exceptions for rape or incest victims, GOP state Sen. Bob Deuell contended only “accurate intercourse” causes pregnancy and GOP state Rep. Jodie Laubenberg contended rape victims don’t get pregnant because “a woman can get cleaned out” with a forensic rape kit.

Texas Republicans passed the law last week, never hearing the voices of thousands of women who went to Austin repeatedly to protest it.

Republican politicians believe that they have the right to control women’s bodies. That is because the GOP seeks what it calls “traditional family values.” Those are the mores of the 1950s. Those are the values Desi Arnaz articulated on “I Love Lucy,” like during the “Equal Rights,” episode when he said: “I am the first one to agree women should have all the rights they want, as long as they stay in their place.”

For the Republican Party, that place would be barefoot and pregnant. That’s the goal of the party’s efforts to outlaw birth control and abortion. Two years ago, Republicans in Mississippi tried to pass what they called a personhood amendment, which declared a zygote – the cell formed at the moment of fertilization – to be a human being with all the rights of the mother carrying the cell.

Even in conservative Mississippi, voters by a wide margin rejected this scheme. It would have criminalized many forms of birth control and even in vitro fertilization. Despite that trouncing, four major GOP presidential candidates pledged to support a personhood amendment.

Although Republicans in places like Wisconsin, Arkansas, Kansas, North Carolina and Virginia passed measures this year to restrict abortions and close clinics, judges have almost immediately blocked implementation of many of them. Some Republican governors admitted when they signed the measures that they knew they’d probably be overturned.

For example, Gov. Jack Dalrymple said in March that a judge would likely strike down North Dakota’s new law, but he didn’t care. He’d spend taxpayers’ dollars on a losing battle to defend it anyway. This from a member of the Republican Party, which claims it seeks less government spending, regulation and intrusion into people’s lives.

Republicans want to return to the days of Desi, who told Lucy in the “Equal Rights” episode: “We are going to run this house like we do in Cuba where the man is the master and the woman does what she is told.”

Republicans should beware, though. As “Julie” warns in their ad: “Now, I am paying more attention”—maybe because she sees the GOP attempting to take her reproductive rights away. Republicans trying to attract women to their party while insulting their intelligence with anti-Obamacare ads should beware. Lucy divorced Desi.