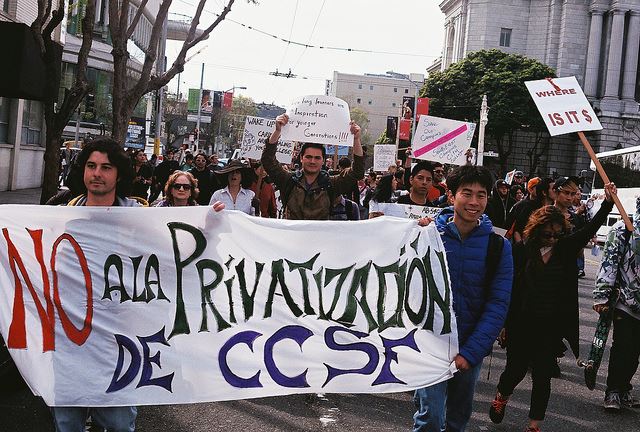 Is Higher Ed the Next Target of Corporate ‘Reformers’?

Many community members see the closure of City College of San Francisco—a lifeline to low-income residents, immigrants, and ex-prisoners in the community—as an attempt narrow the mission of public education.

As students at City College of San Francisco (CCSF) registered for fall classes this month, they received an alarming piece of news: The Accrediting Commission for Community and Junior Colleges (ACCJC), one of seven regional accreditors in the western United States tasked with ensuring the quality of higher education programs, announced that it would terminate the school’s accreditation in July 2014. Currently serving more than 85,000 students, CCSF will be the largest school ever to lose its accreditation, which will effectively ensure its closure by disqualifying students from receiving federal loans and grants and the college from state funding.

The proposed shuttering of one of the nation's largest community and junior colleges, labor and education activists charge, bears unsettling parallels to the K-12 school closings that have wracked urban areas this year, and foreshadows a corporate-backed reform movement come home to higher education.

As many community colleges have turned their backs on open-door admissions policies and moved towards more selective enrollment amidst deepening budget cuts, City College has fought to preserve the mission of open and accessible education for all. It’s the largest provider of English as a Second Language (ESL) classes in San Francisco and of free, noncredit adult education courses in the state of California. Through the “Second Chance” program, which recruits and supports formerly incarcerated students, it also provides important services for disenfranchised members of the community.

But it’s such services that accreditors say have cast doubt on the college’s solvency. In a July 3 letter to college administrators, ACCJC president Barbara A. Beno said that commission members had voted to close the school in part because of its shaky fiscal planning, citing “the lack of financial accountability as well as institutional deficiencies in the area of leadership and governance as the main obstacles to the college's turnaround.” In 2012, ACCJC had placed City College on “show cause” sanction, the most severe of three levels of warnings reserved for institutions found to be in substantial non-compliance with eligibility requirements and standards for accreditation. These requirements are not regulations of state or local agencies, but instead are developed by members of the accreditation commission.

Prior to June 2012, when the commission slapped its most severe sanction on City College, the school had never received a sanction in its 50-year history. The commission’s decision was therefore unexpected and “outrageous,” says Alisa Messer, president of the American Federation of Teachers Local 2121, which represents City College faculty members. Since being ordered to “show cause” as to why it should retain its accreditation, the college has cut staff and pay, rewritten its mission statement and reorganized its management structure in order to meet a list of 14 recommendations made by ACCJC in 2012. But most of the recommendations had little to do with educational quality, asserts Messer, who is also an English instructor at the college.

At the heart of the battle over City College lie questions about the role that the federally-recognized accrediting body is playing in the continued downsizing of the California Community Colleges, which make up the largest system of higher education in the nation. California’s community colleges have been sanctioned at a far higher rate than other systems—between June 2011 and June 2012, ACCJC generated 35% of the sanctions issued to two-year colleges nationwide, though it oversees just 5% of community colleges—and a quarter of the state’s community colleges are currently on sanctions that could eventually lead to their closure.

Accreditors must be authorized by the Department of Education, but critics emphasize that they are private bodies that lack substantial oversight and are open to influence from outside funders and priorities. Instead of focusing on the caliber of instruction and educational programs, claims former California Federation of Teachers President Martin Hittelman in a briefing paper (PDF), the accrediting body has attempted “to micro-manage the fiscal and governance processes of the colleges it accredits through fear and intimidation.” Since the 2008-2009 academic year, state funding for the California Community Colleges has been cut by 12 percent, and enrollment has decreased by nearly three million students.  Hittelman charges that the recommendations made by the ACCJC have “made hard times in the community colleges even harder,” and forced schools to deepen the austerity measures already imposed by state cuts to avoid losing government funding entirely. (ACCJC declined to comment for this article.)

Among the problems identified in ACCJC's March 2012 evaluation of City College, for example, is the provision of healthcare benefits to part-time faculty—an area that the union asserts is subject to collective bargaining and not under the purview of accreditors. The closure decision represents, in part, an attack on a progressive faculty union that has won “one of the best contracts for part-time faculty in the nation,” says Joe Berry, a labor educator and contingent faculty organizer.

The evaluation also took issue with the college’s commitment to providing noncredit classes, which bring in less revenue but allow the college to serve a large number of non-traditional students. The July 2012 letter placing City College on sanction asserts that an inadequate number of full-time administrators and lack of centralized decision-making have “kept City College of San Francisco from adapting to its changed and changing fiscal environment.”

Following a new round of state budget cuts, City College had a $6 million deficit in 2012. But Messer contends that new state and local budget measures, including one passed by San Francisco voters in November 2012 that directs an additional $15 million in revenue to the college annually, have already helped shore up the school’s finances. She says City College is the only community college in the state that has “returned to pre-recession revenues,” and disputes the state Fiscal Crisis & Management Assistance Team's projection of a $2.5 million deficit for the 2014-2015 year as inflated.

Instead, many community members see the closure of City College—a lifeline to low-income residents, immigrants, and ex-prisoners in the community—as an attempt to narrow the mission of public education. ACCJC President Beno publicly supported the Student Success Act, a bill passed by the California legislature in April 2012, meant to increase graduation rates at community colleges as part of a push for reforms known as the “completion agenda.” But many students opposed the bill, saying that it would ration access to education and restrict its scope by prioritizing newer students for enrollment and requiring new standardized tests to assess student learning.

Opponents of City College’s closure cite the decision as evidence of the accreditor's capture by corporate-backed education “reformers.” Last year the Lumina Foundation, an Indianapolis-based body established in 2001 by the private loan industry, awarded ACCJC a grant to develop a new “Degree Qualifications Profile Project” that will develop measures for assessing student learning at community colleges. (A failure to adequately document “student learning outcomes” was one of the deficiencies listed in the 2012 sanction report.) The Lumina Foundation also funded California's Student Success and Completion Task Force, whose recommendations were used to author the Student Success Act, and the foundation has backed the “completion agenda” in other states as well.

Many are wary of a new movement to create standardized metrics in higher education, pushed by funders such as Lumina. Just as the closures of schools deemed underperforming have paved the way for the expansion of charter schools—even though the performance of charters has been decidedly mixed—labor activists warn that a new push to impose rigid standards on public colleges and universities could increase the market share of for-profit colleges that have often been accused of scamming students and taxpayers alike.

Due in part to increased scrutiny from federal regulators and consumer advocates, enrollment at for-profit colleges has been in decline in recent years.  A December report from the National Student Clearinghouse estimates that enrollment at for-profits fell by 7 percent from the fall of 2011 to the fall of 2012, compared with a 1.8 percent drop in higher education overall. A hollowed-out public system could provide fertile ground for the for-profit industry to re-group, however, and there have been several signs that it is doing so in California.

Last summer, the Western Association of Schools and Colleges—the regional body of which ACCJC is a member—granted permission to the company UniversityNow to take over Patten University, a struggling non-profit college in Oakland, Calif. This revived the possibility for such controversial non-profit to for-profit conversions, which until then had been largely disallowed by accreditors, as Inside Higher Education reported in July 2012. UniversityNow has also won the backing of the mayors of San Francisco, Oakland and Sacramento for a new, online university system that will allow municipal workers to take online courses at no out-of-pocket costs, subsidized through the tuition reimbursement funds that cities pay their workers.

It remains to be seen whether City College—or, some speculate, its taxpayer-funded academic buildings—might be sold off in whole or in part to a for-profit college. But it’s likely that the for-profit industry stands to benefit from City College's closure by absorbing its students. A report released in December 2012 by the U.S. Treasury Department found that state budget cuts to community colleges during the past decade correlate with increasing enrollment at for-profit schools.

There are still several avenues through which City College may escape closure. The college will remain open until July 2014, during which time the California Community Colleges system plans to appeal the decision. This option remains a long shot since “[the appeal process] goes directly back to the same body that made this decision,” says Messer, but the union is also looking into what legal options it might possess.

In April, state and local unions filed a complaint with the Department of Education calling for a reversal of the 2012 sanctions and accusing ACCJC of “serious conflicts of interest” and “disregard of the mission of community colleges,” among other allegations. Faculty and student activists, organized into the Coalition to Save City College, have also launched a campaign to pressure the Department of Education not to renew its recognition of ACCJC when it comes up for review in the fall of 2013.

The fate of City College will likely have implications far beyond the Bay Area. In Chicago, ground zero for corporate-backed reform policies, last fall's historic teachers strike catalyzed a movement to defend public education. The fight to save City College is now “the Chicago of higher education,” says Joe Berry, who believes that faculty, students and staff have a crucial opportunity to beat back the privatization of higher education. But if the decision to close City College stands, he warns, “the race to the bottom will proceed.”