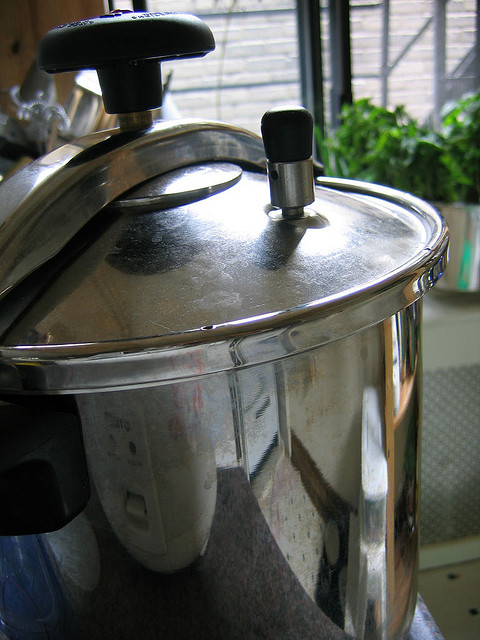 Carrying a pressure cooker much like this one gained Talal al Rouki a visit from the FBI under suspicious behavior in May. The FBI's scrutiny of pressure cookers increased after the Boston bombers used one to build a bomb (Simon Law / Flickr / Creative Commons)

Advocates are wary of an America where carrying-a-pressure-cooker-while-Muslim can bring the FBI knocking.

U.S. Muslims are well aware that warrantless surveillance can hamper one's ability to perform mundane tasks that have nothing to do with public advocacy, much less with breaking the law.

The Council on American-Islamic Relations (CAIR) announced on Tuesday that the Muslim civil liberties group had joined 18 other organizations in a lawsuit against the National Security Agency’s telephone surveillance program.

Zahra Billoo, executive director of CAIR's San Francisco Bay Area chapter, observed that “massive warrantless surveillance of law-abiding citizens has a profoundly negative impact on the constitutionally protected right of association utilized by all those who seek to engage in public advocacy.”

And U.S. Muslims are well aware that warrantless surveillance can hamper one's ability to perform mundane tasks that have nothing to do with public advocacy, much less with breaking the law.

In May, for example, Gawker noted a report that FBI agents had visited the home of Talal al Rouki, a Saudi student in Michigan, after a neighbor alerted authorities to the fact that he had been spotted walking outdoors with a “bullet-colored” pressure cooker.

As it turned out, no terrorist operation was underway and the pressure cooker was simply being used to transport food—which had also been prepared in the device—from al Rouki’s house to the house of his friend. One of the FBI agents is said to have warned the student to “be more careful moving around with such things.”

Among the U.S. entities best known for its institutionalized scrutiny of Muslims is the New York City Police Department, which along with the CIA erected an extensive spying apparatus targeting regional communities. Minute details relating to Muslim individuals and establishments were fanatically compiled.

One highlight of the campaign was the deployment of an informant who actively encouraged the hatching of terrorist plots by the surveilled population, thereby enhancing the marketability of his own information.

According to a recent report from the CUNY School of Law's Creating Law Enforcement Accountability and Responsibility (CLEAR) Project titled “Mapping Muslims: NYPD Spying and its Impact on American Muslims,” there is evidence of a “stigmatization” of the group courtesy of “state-propagated notions” concerning Muslim “dangerousness” and the conflation of Muslim attire and practices with Islamic radicalism.

In addition to encouraging hate crimes against Muslims—which have now reached unprecedented levels—such policies threaten the country’s pretenses to democracy. As the report notes: “The fear of being publicly associated with religious Muslims and the self-censorship that results … point to reduced opportunities for social and political participation that are essential in a democratic society.”

In a shameless embrace of stigmatization, a 2007 NYPD report titled “Radicalization in the West: The Homegrown Threat” offered guidelines on how to spot Muslims potentially undergoing radicalization, one outcome of which is “Jihadization.”

There was no section on bullet-colored pressure cookers, but perhaps the oversight can be corrected in subsequent editions.

A 2006 USA Today/Gallup Poll of non-Muslim Americans regarding attitudes towards Muslims produced the following statistics:

Thirty-nine percent of respondents … said they felt at least some prejudice against Muslims. The same percentage favored requiring Muslims, including U.S. citizens, to carry a special ID ‘as a means of preventing terrorist attacks in the United States.’ About one-third said U.S. Muslims were sympathetic to al-Qaeda, and 22% said they wouldn't want Muslims as neighbors.”

According to the accompanying USA Today article, studies indicate that “the hard feelings are damaging the mental health of U.S. Muslims.”

The NYPD’s broad-based surveillance … has turned religious spaces, intended to provide a haven for new and old congregants to forge bonds and support networks, into the opposite—a space where interactions have become marred by mutual suspicion.”

Inventing the invention of Islamophobia

The dissolution of community is naturally compounded by other by-products of U.S. aspirations to apartheid.

Noting that “[p]olitical organizing, civic engagement and activism are among the first casualties of police surveillance,” the authors of “Mapping Muslims” document a curtailment of free speech in the mapped population, where “[k]nowledge of surveillance leads not only to self-censorship on many religious and political topics, but also to an inability to discuss even the surveillance itself, thereby deterring a pivotal constitutional right—the discussion of problematic government policies.”

Of course, some elements of the U.S. punditry prefer to displace blame for assaults on free speech. Neocons David Horowitz and Robert Spencer, for example, accuse Islamic totalitarians of inventing the concept of discrimination against Muslims in order to thwart any criticism of the religion. In an advertisement for their pamphlet “Islamophobia: Thought Crime of the Totalitarian Future,” we learn that “‘Islamophobia’ is a dagger aimed at the heart of free speech and also at the heart of our national security.”

If the best way to achieve “national security” is to suffocate the domestic Muslim community while engaging in various forms of repression of Muslim populations abroad, a totalitarian future may not be so far off.

Belen Fernandez is the author of The Imperial Messenger: Thomas Friedman at Work, released by Verso in 2011. She is a member of the Jacobin magazine editorial board, and her articles have appeared in the London Review of Books blog, Salon, The Baffler, Al Akhbar English and many other publications.