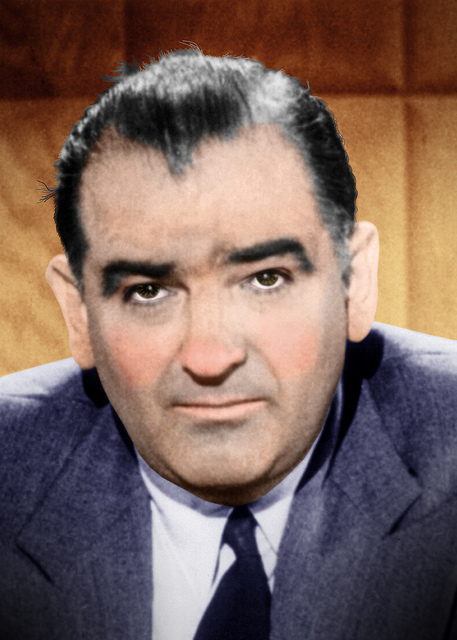 Labor and the Left were a prime target of McCarthy--and every other domestic spying operation of the 20th century. (DonkeyHotey / Flickr / Creative Commons).

Why NSA Surveillance Should Alarm Labor

If unions are not speaking out against PRISM, it is because they have short memories.

Contrary to the arguments in Louis Nayman’s somewhat befuddling “In Defense of PRISM,” progressives who criticize the abuses and excesses of the National Security Agency are not “delegitimizing the government.” Rather, as Zaid Jilani rightly points out in his response to Nayman, almost the obverse is true: Indiscriminately defending the government’s actions—merely to avoid providing fodder for the Tea Party—threatens the legitimacy (not to mention the coherence) of the progressive movement.

Nayman’s defense of the NSA is particularly disturbing coming from a self-identified labor organizer. It’s difficult to imagine a constituency that should have deeper qualms than organized labor about vesting so much surveillance and police power in the hands of the state at a time when the collusion of corporations and government has never been so intimate. Defending PRISM because it “keeps us safe” presumes that the government always operates to preserve the interests and safety of all, equally. But as labor activists know better than anyone, that isn’t true.

Over just the past few years, we’ve seen the government undermine public employee benefits while cutting taxes for millionaires and allowing bailed-out bankers to take home multi-million dollar bonuses; rush to the aid of the financial institutions that sunk our economy while allowing millions of working-class homeowners to be foreclosed upon; and fiercely defend corporate “speech rights” while allowing the same corporations to undermine workers’ freedom to speak out and organize themselves for better conditions.

Nayman may be right that “[d]efense of life, freedom and property is a legitimate function of government,” but history loudly testifies to the fact that the state always defends “life, freedom and property” more vigorously for some than for others. Any wholesale defense of the U.S. government’s spying apparatus depends on a disturbing amnesia about the state’s dealings with working people and their organizations, both in the recent and more distant past. And it depends on the assumption that working people and their organizations have never been, and will never be, the targets of surveillance.

But throughout the 20th century, U.S. domestic spying tended to focus on precisely those individuals and organizations who posed a perceived threat to corporate plutocracy and the hegemony of (white) elites—i.e. radical labor, left-wing advocates for a more just economy, and organizers in the fight for racial justice. As early as 1916, New York police were revealed to have wiretapped the phones of labor organizations in the city. “The police tap the wires of a union as soon as a strike is started,” testified a union official, “as soon as it is known that trouble is brewing.” Information regarding unions’ plans, he said, was then transmitted to the employers, enabling them to block strikes.

A few years later, during the first Red Scare—the years following WWI and the Bolshevik revolution—the Justice Department’s General Intelligence Division spied on union members and labor activists across the country.  Headed by a 24-yr-old J. Edgar Hoover, General Intelligence employed unwarranted surveillance, burglaries, and infiltration—authorized under the Sedition Act of 1918—to identify suspected radicals. In 1920, many thousands were rounded up as part of the Palmer Raids..

Leaders Eugene V. Debs, Emma Goldman, and hundreds more were charged and imprisoned under the Espionage Act of 1917. (It’s not incidental that NSA whistleblower Edward Snowden has also been charged under the Espionage Act). And in 1920, Goldman and 248 other suspected foreign radicals were loaded onto the USAT Buford—nicknamed the “Soviet Ark” by the press—and hauled off to Soviet Russia.

In the 1950s, McCarthy and his cronies once again focused the surveillance powers of the American state on labor and left-wing organizations.  This time, Hoover’s FBI not only monitored and infiltrated left-wing groups, but enlisted employers to spy on and fire workers with dissident sympathies. Thousands of accused communists lost their jobs, friends, and livelihoods. Among those blacklisted for their political beliefs, was the writer and broadcaster Studs Terkel.

“My crime?” Terkel wrote in 2007, “I had signed petitions. Lots of them. I had signed on in opposition to Jim Crow laws and poll taxes and in favor of rent control and pacifism.”

Out of the McCarthy era grew the FBI’s COINTELPRO, designed to monitor and disrupt labor, the anti-war movement, the black freedom struggle, and their allies, real and perceived. Thousands of activists and organizations were targeted for political surveillance—from Ella Baker to Muhammad Ali to the Quaker American Friends Service Committee.  Following the March on Washington, Attorney General Robert Kennedy infamously authorized the FBI to monitor Martin Luther King Jr. and his associates. In the hopes of linking King to communism, the FBI tapped his phones and broke into his home and office to install hidden tape recorders.

This history, probably familiar to most of us, bears repeating, lest we forget that the U.S. intelligence apparatus has a long and sordid preoccupation with left-wing organizing, and the federal government’s definition of a “threat to society” has been, over the years, extremely capacious—easily accommodating labor, feminist, anti-war and civil-rights activists.

It goes without saying that all of the U.S. government’s 20th century efforts to quash left-wing dissent—from the Palmer Raids to COINTELPRO—would be accomplished with immeasurably increased ease, efficiency and secrecy under the NSA’s Internet and phone spying programs. No need to break into someone’s home to monitor their conversations when the NSA can see their email and instant messages; no need to scour someone’s newspaper subscriptions to determine their political sympathies when the NSA can monitor the websites they visit.

Before we surrender any of our privacy rights to the U.S. intelligence behemoth, we should consider the grave consequences for our sisters and brothers who may find themselves subject to the modern-day equivalent of the Red Squad, The House Un-American Activities Committee or Hoover’s FBI.

For the unpleasant truth is that none of this stuff can be comfortably consigned to history. According to documents obtained by the Partnership for Civil Justice Fund (PCFJ) though a Freedom of Information Act request, the FBI coordinated a nationwide intelligence gathering effort to monitor the activities of the Occupy Wall Street movement as recently as 2011—with the apparent intention of passing along “information about activists’ plans to the finance industry.” The documents show the FBI meeting with the New York Stock Exchange to discuss the protests as early as August 19, 2011—a full month before the first Occupy action—and warning corporations in early September that they might be the target of an Occupy protest.

Included in the documents is a report issued by the Domestic Security Alliance Council (DSAC), which the federal government describes as a “strategic partnership between the FBI, the Department of Homeland Security and the private sector.” The report, which discusses Occupy’s West Coast port protests, was intended to “raise awareness concerning this type of criminal activity.” The Naval Criminal Investigative Services (NCIS) also reported to DSAC on the relationship between organized labor and Occupy during the port actions.

As PCFJ executive Director Mara Verheyden-Hilliard explained to Democracy Now, “[t]hroughout the materials there is repeated evidence of the FBI and Department of Homeland Security, [and other] American intelligence agencies working as a private intelligence arm for corporations, for Wall Street, for the banks, for the very entities that people were rising up to protest against.”

All this points to the fact that today’s ever-expanding surveillance state should strike fear into the heart of organized labor not only because there is opportunity for abuse, but because there is motive. Thanks to Citizens United, the funding of most major political campaigns by the richest fraction of society, and the increasing coziness of Washington and Wall Street, we’re living in a moment in which the interests of the U.S. government and its representatives are increasingly synonymous with the interests of the wealthy, the banks, and major corporations.

Therefore, organized labor and left-wing activists—agitators of Wall Street and corporate America—pose a threat to the aims of the U.S. government. Which is to say that now is an extremely bad time to permit the feds any more power to invade our privacy, as they have throughout American history, to undermine economic justice organizing. Because, frankly—as the collusion between intelligence agencies and the private sector during Occupy Wall Street already attests—they will.

But there’s a less abstract sense in which organized labor, both principally and strategically, should be against mass governmental surveillance. One which almost any worker can appreciate: Surveillance itself is a tool of suppressing workplace dissent.

Anyone who has walked a picket line in the past decade has probably had a smug supervisor point a cell phone camera or flip cam in their direction. And while employers have defended such surveillance—before the NLRB—as a means of recording evidence of labor law violations, the effect is always the same: to make the boss’s presence felt, to make workers feel watched, and to make them fear retaliation for their union activity, even though such retaliation would be illegal.

It’s this element of surveillance that the United Electrical, Radio and Machine Workers of America (UE) recognized at its September 2011 National Convention. A resolution adopted there, entitled Defend Our Civil Liberties, reads, “Bosses try to instill fear in workers during union organizing campaigns—that is the kind of fear that the government has tried to spread across society as a whole.” It continued:

People may avoid anti-globalization rallies if they know they are under government surveillance. A union member will think twice about voicing their outrage on a picket line if they know they could face trumped-up terrorism charges. Fewer people attend organizing meetings if they suspect that someone in the room could be a police agent.

Ultimately the resolution calls on Congress to “outlaw political spying and disruption by the FBI and other federal agencies, repeal the FISA amendment act, [and] repeal or let sunset regressive parts of the Patriot Act.” As UE Political Action Director Chris Townsend explained recently, the UE will be “sounding the alarm bell” on government surveillance for all of organized labor.

“Our civil liberties must not be lost in the security stampede drummed-up by politicians and corporations,” Townsend wrote. “[S]urveillance tools given to the government can, and will, be used against law-abiding working people.”

It’s this reality—that the NSA’s new spying powers represent an extension of the kind of repression regularly engaged in by union-busting employers across the country—that we hope the rest of the labor movement will come to appreciate. The UE’s leadership on this issue deserves praise. They’ve sounded the bell. Who will hear it?

David Segal is executive director of, and Sam Adler-Bell a campaigner for, Demand Progress. Segal is a longstanding labor activist, and labor-backed city councilman, state representative and candidate for congress in Rhode Island. Follow Demand Progress on Twitter at @demandprogress and Sam at @samadlerbell.