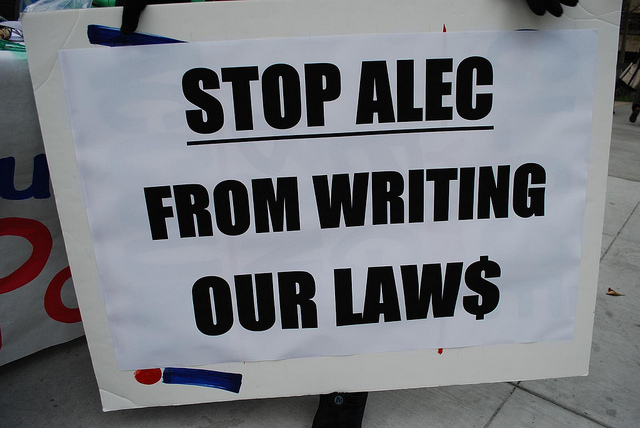 The Force Behind Bills To Lower Wages and Suppress Workers’ Rights? You Guessed It: ALEC

The right-wing American Legislative Exchange Council has modeled legislation to strip workers of their rights nationwide.

While Wisconsin under Scott Walker has consistently ranked amongst the worst in the country in job growth and economic performance even by groups like the U.S. Chamber of Commerce, in ALEC's world, Walker's state is 15th in economic outlook.

According to a new analysis by the Center for Media and Democracy (CMD), publishers of ALECexposed.org, at least 117 bills introduced in 2013 fuel a “race to the bottom” in wages, benefits and worker rights—and resemble “model” bills from the American Legislative Exchange Council (ALEC).

As working Americans speak out for higher wages, better benefits and respect in the workplace, a coordinated, nationwide campaign to silence them is mounting—and ALEC is at the heart of it. ALEC corporations, right-wing tink tanks, and monied interests like the Koch brothers are pushing legislation throughout the country designed to drive down wages; limit health care, pensions, and other benefits; and cripple working families' participation in the political and legislative process.

Emboldened ALEC goes on the offense

ALEC's mallet of choice for private-sector workers is so-called “Right to Work” legislation. These laws were utilitized in Southern states before and after WWII to suppress wages and keep out unions like the CIO, which supported an end to Jim Crow laws and racial segregation. In the decades that followed, they made little headway in northern states. In 2012, however, Governor Mitch Daniels of Indiana rammed a “Right to Work” bill through the legislature. Next was the battle royale in Michigan. Governor Rick Snyder pushed “Right to Work” through a lame duck session in December 2012 right before a new, more worker-friendly legislature was sworn in. As CMD reported, it contained verbatim language from the ALEC bill.

In every instance, ALEC and the Kochs were there to cheer the radical policies on. Koch Industries has long been an ALEC funder, serving on ALEC's corporate “Private Enterprise” board, but the Kochs also exercise their power through Americans for Prosperity, a David Koch founded and funded political action group that spent millions on TV defending ALEC legislators and Scott Walker against recall and providing fake, astroturf support for the bills in Ohio and Michigan. It's not the first time the Koch family has come to the aid of union-busting bills. The Institute for Southern Studies points out that in 1958, Kansas passed a right-to-work law “with the support of Texas-born energy businessman Fred Koch, who viewed unions as vessels for communism and [racial] integration.”

Other high-profile ALEC fights include battles over “paycheck protection” in Alabama, Arizona, Florida, and Missouri. In 2012, Californians battled an ALEC-style “paycheck protection” bill, disguised as campaign finance reform. Prop 32 was defeated at the polls in November 2012, but not until millions had been spent on both sides. Opponents were right to be worried. New numbers from the Milwaukee Journal Sentinel show that Wisconsin's Act 10, which crippled unions' ability to negotiate for better pay and benefits, cut union membership in half and forced workers to pay thousands more in benefits.

While ALEC and its supporters frame their actions as fiscally responsible and pro-worker, it is clear that this is a deeply political agenda. An analysis by the Economic Policy Institute (EPI) shows that, on the whole, these types of bills don't create new rights for employees but “significantly tilt the political playing field by enabling unlimited corporate political spending while restricting political spending of organized workers.” Fox News reporter Shepard Smith put it even more bluntly. He noted that of the top 10 political donors in the United States, only three donated to Democrats—all unions. “Bust the unions, and it's over” for the Democrats, he said.

ALEC's attack on wages, benefits, and unions harms all workers

ALEC's wage suppression agenda also targets non-union workers in the low-wage sectors that are forming the core of the U.S. economy. In an issue brief called “The Politics of Wage Suppression: Inside ALEC's Legislative Campaign Against Low-Paid Workers,” the National Employment Law Project counted 67 bills sponsored or co-sponsored by ALEC politicians in 2011-12 that eroded wages and labor standards.

Gordon Lafer, a political economist at the University of Oregon's Labor Education and Research Center and a research associate at the Economic Policy Institute (EPI), told CMD, “ALEC's efforts against the minimum wage, prevailing and living wage, paid sick leave, etc. are an across the board attempt both to worsen any kind of labor standard and also to undermine any institutional or legal basis through which workers exercise some control over the workplace in the labor market.”

But you won't see these statistics at ALEC. In an annual propagandistic ritual, ALEC “scholars” rank states' economic outlook based on how well states are following ALEC policy prescriptions. While Wisconsin under Scott Walker has consistently ranked amongst the worst in the country in job growth and economic performance even by groups like the U.S. Chamber of Commerce, in ALEC's world, Walker's state is 15th in economic outlook.

Eleven states have introduced bills in 2013 to override or prevent local paid sick leave ordinances. At least eight of these were sponsored by ALEC members, and this is no accident. Although ALEC has not adopted such a bill as an official “model,” ALEC member the National Restaurant Association (NRA) brought a bill to override local paid sick leave ordinances to ALEC in 2011, as CMD has reported.

The commerce task force's Labor and Business Regulation Subcommittee took up “paid family medical leave” as the sole topic of discussion at the ALEC 2011 Annual Meeting in Louisiana. Subcommittee meeting attendees were given complete copies of Wisconsin's 2011 Senate Bill 23 (now Wisconsin Act 16). They were also handed a target list and map of state and local paid sick leave policies prepared by the NRA. Since then, Louisiana enacted a similar law in 2012, and 2013 has seen the introduction of a spate of similar bills, with Mississippi, Kansas, Tennessee, and Florida signing the measures into law.

Wisconsin Act 16 overrode Milwaukee's popular paid sick leave ordinance that was passed in November 2008 by referendum with nearly 70 percent of the popular vote. In 2011, while the Capitol was surrounded by protesters and Democratic Senators were out of state, the Wisconsin Legislature moved to override the measure.

Harold Schaitberger, General President of the International Association of Fire Fighters, put it best when he told CMD, “The sole purpose of ALEC has been to develop the most anti-middle class, pro-corporation policies, legislation, and agenda in history. They've been waiting for just the right moment to reverse the progress of the American middle class and drive everyone to the bottom, to the lowest wages, the weakest benefits, no job security, and no retirement to speak of. We may not have the billions of dollars of the Koch brothers. But we have each other and we must stick together and fight ALEC's cynical and un-American agenda.”

Excerpted with permission from the Center for Media and Democracy.

Mary Bottari and Rebekah Wilce work for the Center for Media and Democracy in Madison, Wis. Bottari is CMD's Deputy Director and an experienced policy wonk and consumer advocate. She launched the BanksterUSA.org website and publishes the only monthly tally of the Total Wall Street Bailout Cost. Prior to coming to CMD, Mary worked for ten years as senior analyst in Public Citizen's Global Trade Watch Division.

Wilce is a farmer with a degree in writing from the University of Arizona. She is the lead writer for CMD's Food Rights Network.