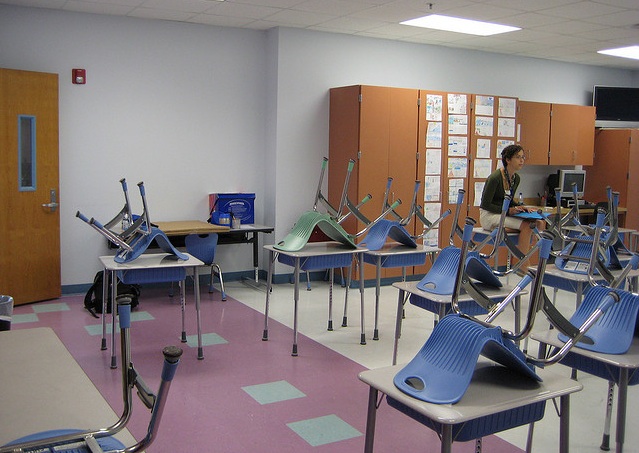 Why are thousands of experienced educators being replaced by new college graduates?

Teach for America has come under heavy scrutiny in recent months. The organization was imagined over twenty years ago by Princeton undergraduate Wendy Kopp to combat the teacher shortage in urban and rural communities. TFA was to bring recent graduates from elite universities to teach in needy schools.

The idea was pretty simple. TFA was not better for students; it was better than nothing. Providing staff in these schools alleviated overcrowding and research shows that class size does matter in a child’s education.

Twenty years later, school districts are firing huge swaths of educators due to budget cuts. These dedicated teachers lose their jobs through no fault of their own, but find themselves competing for a dwindling number of open teaching slots. One would think that at this point, TFA is no longer necessary. We have a surplus of teachers and until politicians make education a priority and fund more teaching positions, this trend will continue.

[T]he district has committed to more than doubling its investment in the TFA program that trains college graduates for five weeks then sends them into schools for two years at a time. The Board of Education voted to increase its payment to TFA from $600,000 to nearly $1.6 million, and to add up to 325 new TFA recruits to CPS classrooms, in addition to 270 second year “teacher interns.”

This information was revealed after Chicago Public Schools announced layoffs of over 3,000 school personnel due to budget cuts.

Why would CPS throw more money into recruiting recent college graduates with five weeks of training and no teaching certificates into the district when it lets go of highly-qualified, certified, veteran teachers?

I checked out TFA’s website. Its mission statement is far more grandiose than its original call to staff schools where “chronic teacher shortages occur.” TFA’s mission is now to “provide excellent education for kids in low-income communities” by recruiting “a diverse group of leaders with a record of achievement” who receive “intensive training.” After their two-year teaching commitment, these recruits “work at every level of education, policy and other professions, to ensure that all children can receive an excellent education.”

These are a lot of lofty platitudes for an organization that was built with the simple, measurable, and temporary mission of providing bodies to classrooms that needed them. Chicago had a diverse teaching force until the mid-nineties when school closings and “turnarounds” targeted schools in black neighborhoods. Chicago has suffered a drastic decrease in the number of teachers of color. It’s disingenuous for TFA to claim its recruits have a “record of achievement” when they have no teaching record and just five weeks of training before being placed in a classroom. Many of the teachers recently laid off by CPS have won teaching awards and have long storied careers in the district. To achieve TFA’s first three points, CPS could re-hire the teachers it laid off instead of replacing 325 of them with TFA recruits.

TFA’s last point about working the policy arena seems to be what Teach for America is really good at.

Since its founding, TFA has amassed some 28,000 alumni. Two have made Time’s “Most Influential” list: its Chief Executive Officer and founder, Wendy Kopp, and former Washington, D.C., schools chancellor and StudentsFirst founder Michelle Rhee. Others have gained prominence as the leaders of massive charter operations, like KIPP Schools and New Schools for New Orleans. And TFA alums are currently the heads of public schools in Newark, D.C., and Tennessee.

What about the other 27,000-some-odd people? That’s where Leadership for Educational Equity, or LEE, comes in. LEE was founded in 2007 as a 501(c)4 spin-off of Teach for America to provide resources, training, and networking for alumni who are interested in elected office or other extracurricular leadership positions. Its goals are ambitious: by 2015, as its standard job posting reads, it hopes to have 250 of its members in elected office, 300 in policy or advocacy leadership roles, and 1,000 “in ‘active’ pipelines for public leadership.” If all goes as planned, LEE could shift control over American education reform to a specific group of spritely college grads-turned-politicians with a very specific politics.

The increase in Chicago TFA  recruits on the heels of a mass firing is bad optics for TFA, as the organization is well known for its effective marketing team (who have had way more than five weeks of training).

TFA must have taken Chicago Mayor Rahm Emanuel’s advice and didn’t let the layoff crisis “go to waste.” With activists and media focusing on school closings and mass firings, TFA could quietly come in and increase its market share in Chicago’s schools.

This subterfuge is necessary in the current crisis that is plaguing TFA. There is a movement growing among past TFA recruits organizing against the groups’ role in corporatizing public schools.

In recent years, former TFA corps members have been increasingly speaking up about problems with the program. In this post, for example, one ex-TFAer argues that it is time for the organization to fold; in this one, an ex-TFA corps member about his lack of preparation for troubled students; and here a professor explains why TFA can’t recruit in his classroom.

TFA is in crisis mode. With the organization losing true believers within its rank-and-file, it doubled down on recruitment and doubled down on marketing. It’s just a shame that none of this has anything to do with improving teaching and learning.

In These Times is proud to feature content from Jacobin, a print quarterly that offers radical perspectives on politics and economics. Support Jacobin and buy a four issue subscription for just $19.