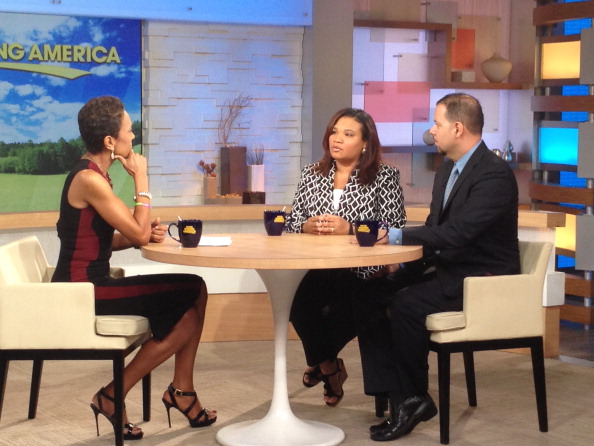 Robin Roberts (left) interviews Juror B29 from the George Zimmerman murder trial, with attorney David Chico, on Good Morning America, July 29, 2013. The juror says Zimmerman "got away with murder." (Photo by ABC via Getty Images)

The Illusion of Juror Sophistication

Like most people on juries, the six jurors thrown into the Zimmerman trial were totally unprepared.

Lawyers are trained in theatrics, illusion, and magic. Acting classes may be more important than law classes.

American jurors, totally untrained in the legal system, are led to think they are more intelligent and sophisticated than they are. Alone, they are capable of some independent thought. Forced into a room with others, they are a disaster. Although states select potential jurors differently, they are usually drawn randomly from a list of driver’s licenses or lists of registered voters. They are average people, a cross-section of Americana, people content with their lives, unencumbered and blissful, just the type of people lawyers want judging their trials because most people lack the sophisticated skill sets of reasoning and logic needed to be a juror.

Lawyers often decide which jurors to use in a trial based on the potential juror’s perceived lack of ability to think logically. A lawyer once told me that he always chooses jurors with strong religious beliefs because “a person who believes a man can walk on water can be talked into anything.” The job of a lawyer is to manipulate the way a person thinks.

The jurors thrown into the George Zimmerman murder trial were tossed into a situation, as are most jurors, for which they were totally unprepared. They went from quiet, average lives, to supporting stars on the latest reality show. The defense attorneys outlined their parts in the show. They were to play rational, intelligent, sophisticated, impartial, and concerned citizens. Without realizing it, they played their parts perfectly.

The Zimmerman case was not difficult except to the pseudo-sophisticate jurors. He stalked, confronted, and killed an unarmed boy walking through a neighborhood. Zimmerman confessed to the crime. But… “Buts” always confuse people tossed unexpectedly into the thinking arena. They signify that the truth may not be the truth, that there is more to the case than one man killing another. The jurors are, in the deliberation room, presently more sophisticated than the average citizen.

The defense attorneys work their magic by convincing the jurors of their own sophistication. The jurors are lead to believe that there is much more to the case than most people realize and only a select few people with their intellectual complexity can see through it all. The jurors start to believe there is more to the case and forget that a man stalked and killed an unarmed boy.

They vaguely suspect that a man with a gun has equaled a dead boy, but they start to doubt themselves.  What seemed understandable is not so simple for the newly ordained sophisticated jurors. The plain fact that a man stalked and killed a boy is okay for the Average Joe, but not for them. Lawyers have convinced them that they are too smart for that.

Lawyers are trained in theatrics, illusion and magic. Acting classes may be more important than law classes. A good lawyer can toss a dummy to the floor and choke it in an instant. Top defense lawyers deserve Academy Awards and they always have the advantage over prosecuting attorneys because prosecuting attorneys are the working-class workers of the legal profession. They become prosecuting attorneys for many reasons, often because they are average and might starve in an independent market situation, or because they have certain noble and naïve ideals about justice.

Good defense attorneys usually make a fortune and are often at the top of their game. Seldom is there a sensational trial without a top actor-lawyer present. If the trial has the potential to be exceptional, they will sometimes work pro-bono knowing that a win will pay handsomely over time. And, they usually win whether the trial is with Casey Anthony, O.J. Simpson or George Zimmerman.The acting superiority of Gary Cooper as defense attorney always exceeds that of Kevin James as prosecuting attorney. Smoke and mirrors often come into play. “If the glove does not fit, you must acquit!” It was made of leather; it had been soaked in liquid, possibly blood; and it had dried. Leather shrinks. Of course the glove did not fit. Any dolt knew that proving that the prosecuting attorneys, and the newly sophisticated jurors in the O. J. trial were something other than dolts. Notable trials are fights between unequal participants. Only in a small local trial does a person get convicted, and then sometimes unjustly and for the same reasons. If they are poor, lawyers even worse than prosecutors often represent them. A person in the U.S gets as much justice as he can afford.

Zimmerman’s lawyers were quick to toss in the old razzle-dazzle. Every juror should be required to watch the scene in musical Chicago, where the lawyer takes everyone completely away from the case. His lawyers talked about Trayvon Martin turning on Zimmerman and attacking him and poor innocent George Zimmerman had no recourse except to kill him. No one knows what happened during that time nor does it make any difference.

A sign in a French zoo cautioned about the animal inside. It said, “This is a very dangerous animal. If attacked it will defend itself.” If Martin hit Zimmerman he had every right to defend himself against an armed stalker. Again, an armed man stalked and killed an unarmed boy.

Jurors are the most important people in a trial and should not go into a courtroom unarmed. In their hands rests life and death and a person’s fate. Yet they remain untrained. A course on being a juror should be taught in every high school. Among other things it should include logic, independent thinking, reasoning, and ways to guard against theatrics, and illusion. When called for duty every juror should be required to take a one-day refresher course and pass a test before being qualified to act as a juror.

Several jurors are now experiencing a form of buyer’s remorse. They bought the product sold by the defense team and now they must justify it by admitting that Zimmerman committed murder but, given their instructions, they could not convict. The illusion of sophistication is gone. There was nothing they could do. Not true. If a person is guilty of murder, convict him. That’s sophistication.

Richard Baker is the author of the novels First a Torch, about the siege of Dien Bien Phu, and Incoming, about soldier suicide.