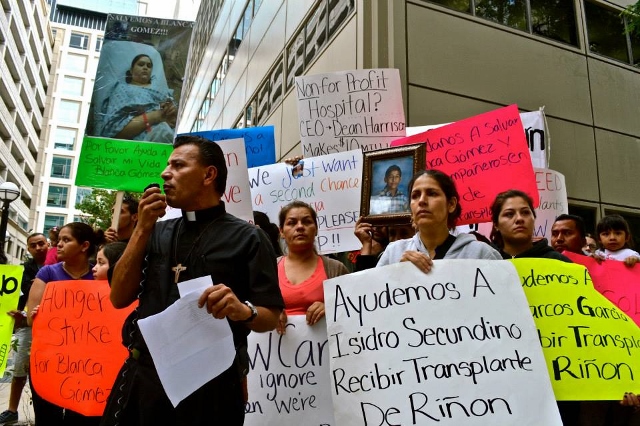 Undocumented Immigrants Win Access to Organ Transplant Waitlists, and a Shot at Life

14 Chicago patients in critical need of transplants went on a hunger strike to change hospital policy.

The healthcare system excludes the majority of undocumented immigrants and 'extends border enforcement to the hospital.'

Fourteen immigrants in critical need of organ transplants won a majory victory this week, though larger disparities in access to the lifesaving procedure persist.

The patients say that they have all been denied spots on transplant waitlists in Chicago-area hospitals—an effective death sentence—because they are undocumented. On July 29, patients and family members went on a hunger strike to demand a meeting with hospital officials.

Today, the hunger strikers declared victory and broke their fast. Following protests at Advocate Christ Medical Center yesterday, the hospital’s chief operating officer met with demonstrators and assured them that undocumented immigrants would not be disqualified from the transplant list. On Monday, a representative from Chicago’s Northwestern Memorial Hospital, a national leader in organ transplants, told the protesters that that hospital would also evaluate patients for transplant candidacy without regard to their immigration status.

According to demonstrators, the two hospitals, along with the University of Illinois at Chicago Medical Center, have also agreed to future meetings with Rush University Chief Operating Officer David Ansel, an advocate of the patients who is seeking to convene a roundtable on the issue of access to transplant procedures for immigrants and the uninsured.

“I feel very relieved,” says Blanca Gomez, 23, who was denied a spot on Northwestern’s waitlist when she went into kidney failure last year.

Though she receives dialysis three times a week, Gomez herself joined in the hunger strike, drinking only water and V8 juice to keep her strength up. Her health problems began three years ago, when complications from her pregnancy left her with serious kidney damage. She gave birth at the University of Illinois Hospital but was ineligible for free post-natal care because of her undocumented status. She says she’s struggled to find care since.

Now, with assurances that she won't be asked to provide proof of citizenship, Gomez will make an appointment to apply again for the transplant list. According to the activists, both Northwestern and Advocate have pledged to remain in communication with the patients about the status of their applications. Though most of the 14 patients didn’t know each other before the strike began, they will negotiate as a group with the hospitals from now on. “We’re family now,” says Gomez. “We’re fighting together for a second chance at life.”

But the fight isn’t over yet. Though the patients won't be required to show immigration documents, they will be asked to demonstrate that they are able to afford costly ongoing post-operative care. Since Gomez and most of the other patients lack insurance, there's still no guarantee that they’ll be given a chance at a transplant.

Indeed, exclusion from healthcare due to immigration status often overlaps with exclusion due to lack of insurance. Some undocumented immigrants are enrolled in employer-sponsored health insurance plans, but many are locked into low-wage jobs unlikely to provide benefits. They are also prohibited from receiving federal public benefits, including Medicare and Medicaid. The result is that approximately 7 million lack health insurance, according to the Pew Hispanic Center.

For the undocumented, organ transplants represent a particularly devastating gap in access to care. An exception to the Medicaid prohibition is made for services considered “emergency procedures,” including care for childbirth and for life-threatening conditions. In most states, however, organ transplants are explicitly excluded from the list of emergency procedures that are covered regardless of citizenship status—potentially disincentivizing hospitals from providing the procedure to the undocumented. In many states, the result is that Medicaid funding can be used for dialysis treatments for undocumented immigrants, but not for transplants—even though a transplant would often be cheaper than a lifetime of dialysis.

Anti-immigrant politicians who have weighed in on the question of transplants for undocumented immigrants make the case for transplant exclusion more crudely. “They should not get any benefit from breaking the law, especially something as expensive as organ transplants or dialysis,” U.S. Rep. Dana T. Rohrabacher, (R-Calif.), told the New York Times in 2011. “If they’re dead, I don’t have an objection to their organs being used. If they’re alive, they shouldn’t be here no matter what.”

A high-profile national case in 2012 highlights how ambiguous it can be whether undocumented immigrant patients are denied transplants because they are undocumented, or because they are unable to pay. In 2012, Jesus Navarro, a Mexican immigrant living in Oakland, California, was booted from a transplant waitlist after a consulting doctor discovered that he was undocumented. Even when Navarro’s wife volunteered to donate her kidney and turned out to be a match, administrators at the University of California San Francisco Medical Center refused the transplant. Though Navarro had private insurance at the time of his consultation, they said, his legal status could compromise his ability to continue paying for follow-up care.

In Chicago, too, it’s ambiguous what’s blocking undocumented immigrants from needed transplants. The Chicago protesters contend that at most hospitals in the city, applicants without Social Security numbers cannot get assessed for a spot on the hospital waitlist, and that Northwestern's pledge on Monday to disregard immigration status represents an about-face in its policy.

But officials at the two hospitals say that they've never taken immigration status into account.

A statement provided by Northwestern to In These Times on Monday said, “All prospective candidates are evaluated against a rigorous set of standards; U.S. citizenship is not among them. The criteria for recipient selection are the same for every candidate regardless of citizenship or other immigration status. [They include] such things as medical and psychosocial factors like home life and social environment, and the ability to meet the demands of a lifetime of routine doctor visits and costly anti-rejection medications.” The hospital did not respond to a question about whether insurance status is among the criteria for recipient selection.

Advocate Christ released a similar statement in response to inquiries from In These Times: “We treat all patients whom we are privileged to serve equally. Citizenship is not a requirement to be placed on the organ transplant donor list.”

Ultimately, it may not matter much whether hospitals say that they're rejecting patients because of their immigration or their insurance status. Either way, the result is the same: The healthcare system excludes the majority of undocumented immigrants and “extends border enforcement to the hospital,” says Rozalinda Borcila, an organizer with the Moratorium on Deportations Campaign, which is supporting the hunger strike.

This pattern is unlikely to change under the Affordable Care Act (ACA), which excludes the undocumented. Nor will proposed immigration reform measures help: The Senate plan would continue to bar both undocumented immigrants and those on the path to citizenship from the provisions of the ACA that assist low-income people in getting health insurance. The result is that most immigrants in the process of earning citizenship will likely remain uninsured for 10 years or more, according to the National Immigration Law Center.

As the national debate over immigration reform proceeds, the Chicago hunger strikers say that their personal and family tragedies show the compounded inequalities of discriminatory healthcare and immigration systems. Though they’re ending the hunger strike for now, they plan to resume if the patients are again denied a spot on the transplant list.

Ultimately, they hope to pressure non-profit hospitals in Chicago to create a process to evaluate candidates based on need, rather than ability to pay.

“The healthcare system has condemned the undocumented, and we have no choice but to target these hospitals one by one,” says Fr. Jose Landaverde, the Anglican priest who runs Our Lady of Guadalupe Anglican Missiona nd has spearheaded numerous protests for healthcare rights for immigrants. The 14 patients originally came together through various connections to the Mission, which is a bedrock of immigrant-rights organizing in Chicago.

There’s reason to believe Landaverde's strategy could work. Last summer, he helped lead another hunger strike that led to pledges from Rush University Medical Center and the University of Illinois Chicago Medical Center to begin accepting undocumented patients onto their transplant lists, as reported by the Chicago Reporter.

UIC has since reneged, says Landaverde, but he’s hopeful that Chicago hospitals espousing a humanitarian mission can be shamed into saving the lives of poor patients needing transplants. He believes that ultimately, the protests could spark a national conversation about the mandate of non-profit hospitals, and in particular their obligation to provide lifesaving procedures to immigrants and other low-income patients. As In These Times has reported previously, it’s estimated that non-profit hospitals in the Chicago area receive tax breaks worth more than three times the amount that they spend on the provision of free or reduced-cost treatment. Crain’s Chicago reports that nonprofit hospital CEOs in Chicago receive some of the highest salaries in the nation, with Northwestern CEO Dean Harrison pulling in $4.6 million in 2011.

For now, the hunger strikers are energized by their provisional wins at Northwestern Memorial and Advocate Christ. They gathered at the Mission today to break their fast and and plan their next steps.

“A promise is nothing concrete,” says Landaverde, “But little by little, we are gaining a victory.”