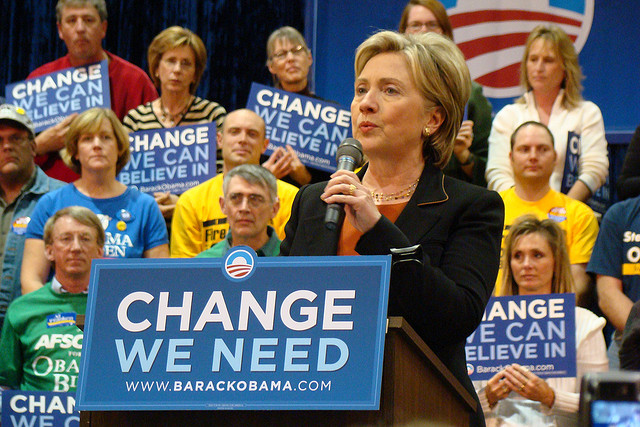 Hillary Clinton hasn't said whether or not she will seek a presidential bid in 2016, but Republicans are already panicking. (Chad McKenna, AFLCIO / Flickr / Creative Commons)

Why Hillary Terrifies the GOP

Over the course of 30 years, the GOP has become practiced, versatile and expert at trashing Hillary Clinton. But suddenly, those moves just aren't working anymore.

“Hillary Clinton—the name alone strikes dread in the heart of freedom loving Americans.” So reads the opening line of the “About” section on the website of The Hillary Project PAC. And whether or not we are all, in fact, filled with “dread” when we think about the former secretary of state, the Hillary Project certainly seems to be: The website bills itself as “the only thing standing between Hillary and the White House.” The fine folks behind The Hillary Project—they include Republican operative Christopher M. Marston, who just stepped down in the face of blowback—are convinced that a 2016 Clinton run is not only likely, but inevitable. They're also convinced that as it stands now, if she runs, she will win.

They're not alone. On August 3, the Daily Beast ran an article by conservative writer (and campaign advertising expert) Myra Adams, listing “16 Reasons Why Hillary Clinton Will Win 2016.” Adams cites “a great social movement to elect the first Madame President,” a “toxic punch of media bias that the Republican presidential candidate will be forced to drink,” and the fact that Clinton—like just about anyone who runs for President—will have lots of money for her campaign. All of this, in Adams' view, adds up to certain victory.

Clicking over to an only slightly more out-there sector of the Internet, you can find the Stop Hillary PAC, which proclaims that “the American way of life is under attack and Hillary Clinton is the liberal standard-bearer,” and which characterizes itself as “committed to saving America from this destructive far-left, liberal cancer that's trying to transform America.” Clicking on the “team” section reveals the political oncologists in question to be a series of beatifically grinning white men, including Colorado legislator Ted Harvey, whose biography reads like an enthusiastic, slightly confused teenager’s summary of the plot of Star Wars. (“When, thankfully by the grace of God, the conservative movement led by Ronald Reagan, took control of the White House and saved a nation and a world that was lost and without hope.” This is Ted's idea of a sentence.)

But Harvey isn't the only GOP player who's been swept up in Hillary panic. Far from it: In the most recent development, Reince Priebus of the Republican National Committee is threatening to blacklist CNN and NBC, refusing to let them air GOP debates unless his demands are met. The grave sin of these networks? Their respective plans to air a documentary (CNN)  and a made-for-TV biopic (NBC) about Hillary Clinton. Unless the offending features are pulled, the GOP won't even touch those networks. Forget “far-left liberal cancer:” At this point, the GOP is treating Hillary Clinton like Voldemort. They're not just afraid that she'll run, they're afraid of what might happen if too many people say her name.

To be clear: Hillary Clinton has not yet said that she will run for President in 2016. She has said, on more than one occasion, that she wouldn't consider running. And, although it's fair to view those statements with skepticism—she's an ambitious, hard-working politician, and she's got such an excellent shot at the nomination that it would be a shame not to take—it should also be noted that, at the moment, her most high-profile political efforts concern elephant poaching. But then, the gut-level Republican conviction that Hillary will not only run for President, but actually become President, is about far more than just Hillary.

What Priebus assumes, and not without reason, is that the biopics will portray Clinton in a positive light. This wouldn't have always been a reasonable assumption. At New York's The Cut blog, Ann Friedman has written what is probably the definitive piece on Hillary Clinton's public image, and its rehabilitation. She makes the point that Clinton's history has consisted mostly of long stretches of vilification, counter-balanced with brief periods of almost-acceptance—and that the acceptance tends to come when she's least active on her own behalf. When Bill's affair with Lewinsky comes out, her approval rating's up; when she runs for Senate, it's down. When she runs for President, hatred; when she accepts the Secretary of State position, love.

“The best defense against being labeled a raging bitch is to convince people you’re an underdog,” Friedman writes. Which raises the question of how much of the GOP's Hillary freak-out is genuine. Although she's been riding high in terms of public opinion, framing Hillary as an unstoppable, unbeatable Ultimate Overdog is probably the best way to counter whatever advantage that confers. She was framed as the Ultimate Overdog in 2008, too, for all the good that did her.

But there's also a genuinely plaintive feel to some of these GOP announcements on Hillary's inevitable victory. Over the course of 30 years, the GOP has become practiced, versatile and expert at trashing Hillary Clinton. They've got more ways to inflict pain than a Mortal Kombat character. But suddenly, those moves just aren't working anymore. The unfair advantage Adams complains about is the fact that the GOP can no longer attract young voters, or voters of color. The “onslaught” she warns her readers to “prepare” for is the fact that people might be genuinely excited about electing the first female President. For the first time in history, right-wingers are looking at a world in which gender equality has progressed so far that being an accomplished, ambitious woman might actually help someone get elected, rather than hurt her chances. And their response is to declare defeat. The rules they've been playing by no longer apply to the game.

It's this—the Right's fear that it can no longer win elections by relying on the widespread hatred of women for being ambitious or hard-working or demanding or eloquent or anything else that falls under the “raging bitch” label—that's the true message, and the silver lining, of all the Hillary panic. The public consensus on Hillary used to be that she was ambitious, conniving, cold, harsh, demanding, insufficiently sexy or maternal or sweet, and therefore unworthy of serious consideration—and lots of this came from her own party. Jon Stewart once quipped, when confronted with a clip of Hillary smiling, that “that look is where boners go to die.” Now, a photo of Hillary Clinton frowning can become a meme about female toughness and cool. Any progressive who suggested that Hillary ought to be processed in terms of her ability to nurture boners would be roundly, and rightfully, slapped down. Of course this doesn't mean that sexism has left the planet, or even that Clinton wouldn't face sexism if she ran; that's absurd. It only means that a certain very old, very well-practiced version of sexism has begun to seem increasingly threadbare and outdated. The world hasn't changed, not completely, but it is changing, and the future will have more room for women like Hillary in it. Whether you'd vote for the woman or not, that's good news.

Which is not to say that the old methods have disappeared entirely. The Hillary Project recently unleashed one of its “smartly targeted social media campaigns” in the effort to “wage a war on Hillary’s image.” Give them credit: Hillary's “image” is, in fact, involved. Because they've been Twitter-spamming reporters to cover their “Slap Hillary” game, in which you, the player, induce a disembodied hand to assault a photo of the former Secretary of State. It has had, aside from a few jokey blog posts and complaints about violence against women, no impact. I mean, it's hate-mongering, it's misogynist, it's indecent, sure. But its primary sin is that it was made in 2000, and looks it. Like much of the Hillary-hatred the GOP unleashes these days, it doesn't seem hurtful so much as pathetic, and really old.