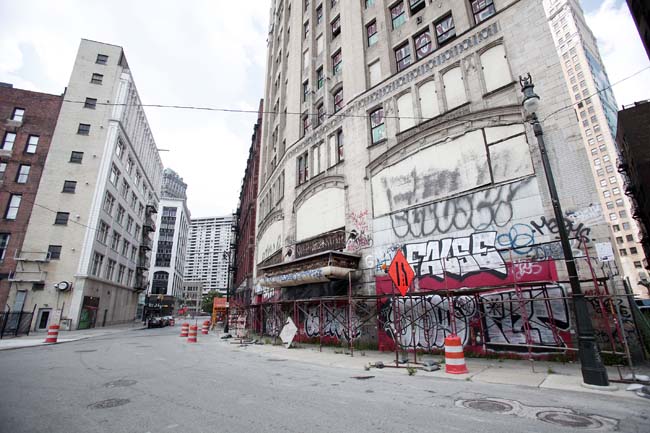 A Half Century After Detroit Uprising, City Still Stranded by Capitalism and Federal Government

Detroit's first black mayor, Coleman Young, and those that followed may not have known it, but Detroit was already on life support and they were the hospice team.

It has been half a century since 1967, a year alternately termed 'the summer of love' and 'the summer of rage,' depending on which part of the country you looked at.  While thousands of white youth flocked to hear music and smoke dope in San Francisco, thousands more young African-Americans and Latinos flocked to the streets during uprisings in Detroit, Newark and 157 more cities. Much will be written about how these “riots” caused the decline of urban America, but that would be both a rewriting of history and a mistake. The reality is more complex and instructive. Detroit, perhaps more than any other city, tells the largely unexamined story of how corporate greed, enabled by and combined with federal government road and housing policies, created the template for the weakening of unions, emergence of oligarchy and development of gross inequality.

It would be comforting to the rest of us if, as oft reported, Detroit’s current woes were due to simple causes—incompetent mayors, corrupt politicians or even unruly residents (like those who rioted in 1967). We’d think, “We’re not like them so it can’t happen to us.”

The right-wing talk show circuits and web blogs buzz with chatter about how Detroit’s corrupt Black Democratic mayors played racial and union politics and drove out white residents leading the city into bankruptcy. But even more credible commentators repeat these shibboleths as well.

Steve Malanga of the Wall Street Journal and Marilyn Salenger of the Washington Post peg Detroit’s demise and population loss as to the aftermath of the August 1967 riots while the Post’s editorial board, among many others, fixes the blame on Detroit’s political and union leadership.

While it is true that many of Detroit’s mayors had serious flaws and made countless mistakes, they did not cause the city’s decline. In fact by the time the keys to Detroit were handed to the Black leadership, Detroit was beyond rescue and they were left to deal with up the mess created by a perfect storm of federal transportation policy (driven by the auto industry and its allies in Congress) and federal housing initiatives, both of which combined to seal the city’s fate. Detroit's first black mayor, Coleman Young, and those that followed may not have known it, but Detroit was already on life support and they were the hospice team.

Fueled by a population explosion during the late 1930s and 1940s when tanks and airplanes for America’s war effort rolled off the assembly lines, Detroit’s population grew from 1.5 million people in 1930 to 1.8 million in 1950. And during that same period thousands more came for the relatively low-skilled but high-paying union protected jobs at places like Ford, Chrysler, Packard and GM. However, by August 1967 Detroit had already lost more than 300,000 residents—equal to the population loss each decade since then.

The nation still calls Detroit as “the motor city,” but by the end of the 1950s it was certainly not that. Big Auto dealt the first blow. Flush with cash from World War II and anticipating a huge growth in demand for their products, Ford, General Motors and Chrysler abandoned Detroit’s multi-story plants abandoned in favor of new sprawling horizontal campuses on former farmland in the Detroit suburbs and in Ohio, Indiana and Canada. Between 1947 and 1958, the Big Three built 25 new factories. None of them were in Detroit.

Taken at face value this made sense, as Detroit then lacked the land for the new horizontally integrated and automated plants. Yet, as historian Thomas Sugrue and others point out, it was also a way for the auto companies to weaken the UAW, which had won unprecedented victories during the war years.

And with the industry went the jobs. In 1960, only Chrysler produced cars in Detroit, its 60,000 Detroit workers representing only half those employed just a decade earlier. In less than two decades, from 1947 to 1967, Detroit lost 128,000 jobs in the auto industry alone.

White workers followed. In 1950 Detroit was a white-dominated city; by 1970 more whites lived in the suburbs than in the city. While ignited by the movement of auto jobs to the suburbs, this mass white exodus was fueled by the federal government and its policies. In 1949, Congress passed the Federal Housing Act. For the first time, homeownership required only 3 percent down for an attractive, low interest rate mortgage. The FHA guidelines favored mortgages in the new suburban developments that were popping up to meet post-war demand and actively discouraged their use in older, inner-city neighborhoods.

Armed with the new FHA product and Veterans Affairs loans, white workers moved with the companies to the suburbs, trading in their houses in what had become a racially mixed city for a suburban tract home in then virtually all-white suburbs. Rather than congregate with others on the way to work in a streetcar, they drove past sprawling suburbs on the new highways lobbied for by Big Auto and built at taxpayer expense.

For black Detroit, the story was quite different. Nearly two hundred thousand African Americans had moved to Detroit since 1930, and by 1950 blacks accounted for 16.8 percent of the population. While they might have wanted to follow the jobs that moved to the suburbs, they could not. With equal housing laws still in the future, they were excluded from buying in the suburban housing developments by developers and real estate agents. Nor could they get FHA loans to buy or improve homes in the city neighborhoods where they could live because the government considered such loans too risky. Black neighborhoods, already chopped up during the 40s and 50s to build the very highways that took whites out of the city, became even more isolated and isolating. Making things worse, as federal dollars were transferred to road building, public transit dollars dried up, and in 1956, with the active lobbying of Big Auto, the historic streetcar system disappeared, leaving no reliable public transportation.

And in 1961 Detroit had its first budget deficit—a $16 million deficit, due to the $16 million in tax revenues it had lost.

While we’ve seen plenty of bad ideas tried in Detroit over the intervening 40 years—from get rich quick schemes like the People Mover (which never had any people) or the Renaissance Center (which was anything but), the bulk of destruction in Detroit of Detroit’s physical structures and its job base is due to the same actors who ignited the decline.

During these years, federally funded highways and urban renewal projects destroyed more than a fourth of the city and separated downtown from neighborhoods. State-funded megastadiums, casinos and convention centers caused further physical damage and separation while failing to bring the jobs and businesses promised in return for the huge debt taken on. And all the while, aided and abetted by federal policy, Big Auto continued to move on—and most particularly, out.

A recent Brookings Institution study revealed that Detroit holds the dubious distinction of having the greatest “job sprawl,” with 77 percent of available jobs more than 10 miles beyond the city’s core. In a city with virtually no public transportation, where 130 schools have been shuttered and where only 20,000 manufacturing jobs remain in a city of 700,000, we should not be surprised that unemployment rate among black men stands at nearly 50 percent—the highest in the nation.

If there are fingers to be pointed, they need to arc back farther to the reigns of Mayors Cavanagh and Miriani, Gov. Romney and big oil. If there are lessons to be learned they are ones that should makes us wary of and oppose racial discrimination, demand corporate accountability and responsibility for the social toll their actions take, thoughtfully protect our public assets of which public transportation is one of the greatest and always question those who would build highways to escape rather than mend the mess they’ve made.

By the time the returning black Vietnam Vets got into a scuffle with the police that set off a week of riots in late July of 1967 the seeds of destruction already had deep roots. Detroit was already a ghost of its former self—done in by both the product the city was known for and by the companies whose wealth it had created.