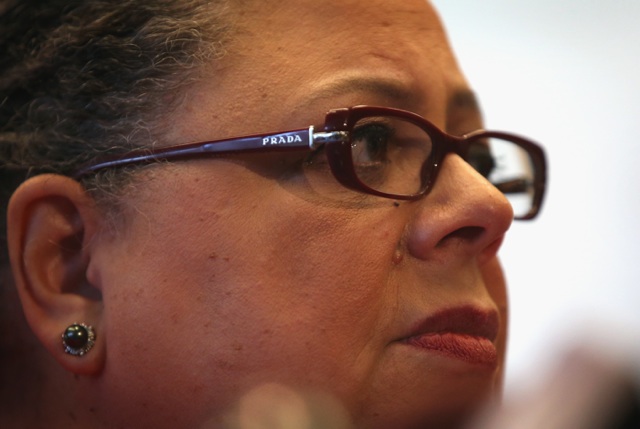 Despite speculation, CTU President Karen Lewis says she will not run for Chicago mayor herself. (Photo by Scott Olson/Getty Images)

The CTU plans to change the political landscape in Chicago.

People who previously didn't see themselves as possible candidates for public office are now viable candidates. The CTU has given people in the city an ability to see that their circumstances could be different than they are currently.

Politics in Chicago is about to get exciting. Not since 1983, when a coalition of Lakefront liberals, Latinos, Blacks and progressive union activists elected Harold Washington mayor, have the prospects for progressive change looked better.

A year ago, the radically democratic Chicago Teachers Union (CTU) made history. With its members galvanized and the community behind them, the union went on strike and forced Mayor Rahm Emanuel’s hand-picked school board to back down.

The CTU has now upped the ante. In April, as the union waged an unsuccessful fight against school closures, CTU President Karen Lewis declared: “If the mayor and his hand-picked corporate school board will not listen to us, we must find those who will.”

The day the closings were announced, Lewis hosted a voter-registration training session in the Bronzeville neighborhood. The union’s goal: The registration of at least 100,000 new voters. As Lewis told the assembled volunteers, “We must change the political landscape in Chicago.”

To that end, the CTU’s Political Action Committee is mapping out an electoral strategy for the Democratic primary on April 15, 2014. The union intends to replace members of the Illinois legislature whose votes in Springfield have failed to serve the educational, employment, housing and transportation needs of Chicago citizens. To that end, the PAC is drawing up a list of Chicago lawmakers to target. The CTU, working with allied community organizations, will then recruit, train and field candidates.

In February 2015, when the primary elections for Chicago’s 50 aldermanic seats roll around, the CTU plans to be well enough organized to radically alter the makeup of the city council.

According to Stacy Davis Gates, the union’s political and legislative director, the groundwork is already laid.

“The CTU has shifted the agenda in Chicago,” she says. “People who previously didn’t see themselves as possible candidates for public office are now viable candidates. The CTU has given people in the city an ability to see that their circumstances could be different than they are currently. That is step one. Step two is organizing. But by working on elections, it does not mean that we are going to abandon our grassroots strategy or direct action. These components complement each other, and all three are necessary for a complete movement.”

In 2011, a transformation of city politics like the one the CTU is now fomenting occurred in New Haven, Conn., where UNITE HERE, which represents Yale University workers, led a political coalition to capture a veto-proof majority in the city council.

UNITE HERE and the CTU are both blazing a trail for what is known as “social movement unionism.” Writing in the Monthly Review, Rico Gutstein and Pauline Lipman observe that the CTU has made “it possible to imagine a counterhegemonic formation that could push forward an agenda for education justice that might spill beyond schools to a claim for the right to the city itself.”

As for Lewis’ own aspirations for office, the plainspoken and charismatic former chemistry teacher maintains she will not challenge Rahm Emanuel in 2015. When asked again in April if she would consider a run for mayor, Lewis said, “No, thank you.” She then added, “Not yet.”