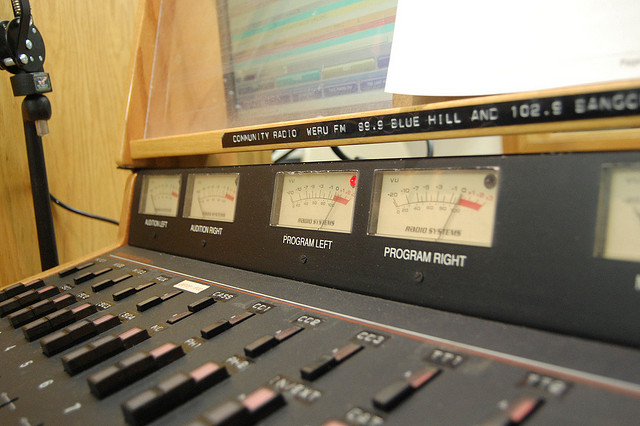 Non-Profits Take To the Air

“A big reason [we applied] is for us to be able to control our own message of the work we’re doing, the struggle that we’re in, and the victories we have"

Thousands of non-profits across the United States are preparing to take advantage of what could wind up as the largest expansion of community radio in the nation’s history.

From October 15 to October 29, the Federal Communications Commission will be accepting applications for low-power FM radio licenses—community radio stations that broadcast at 100 watts or less, typically listenable within a roughly 5-mile radius. Organizations must be locally owned, not-for-profit and be able to identify an unused frequency in their area. The FCC has no set quota on how many licenses it will issue, but community radio advocates estimate the number will eventually be around 1,000.

“The significance of this is pretty immense,” says Ian Smith, program director at the Philadelphia-based Prometheus Radio Project, an organization that promotes progressive community radio and is now helping groups prepare their applications to the FCC. “It’s really the last major opportunity for communities and neighborhoods to get a piece of the airwaves.”

The FCC first created the LPFM designation in 2000. But thanks to a push from large broadcasters who warned against the risks of new stations signals’ interfering with their frequencies, Congress restricted the FCC from issuing the LPFM licenses in urban areas. Over the course of the next ten years, Prometheus and a host of other organizations pressured Congress to expand license eligibility through the Local Community Radio Act, which finally passed on its third attempt in 2010.

The two-week window in October may be the last chance for community radio stations to get a share of the airwaves. Not only will it be politically challenging to enable the FCC to issue more licenses, but there are also clear technical limitations. As the FM dial gets more and more crowded, it could be quite awhile before as many frequencies are up for grabs again.

As a result, a wide array of non-profit groups and educational institutions are hoping to take advantage of the opportunity.

Although the groups applying for licenses have different objectives, what many of them share is the sense that commercial radio—often dominated by large media conglomerates like Clear Channel that usually broadcast nationally syndicated content—is inadequate when it comes to addressing local issues. Whether it’s a library, a social justice group or an immigrant advocacy organization pushing for a station, community radio advocates have the sense that they’re filling in critical political and cultural voids across the country.

Tallin Curran is the IT manager at the Six Mile Regional Library District, which serves a handful of towns in southwestern Illinois. He told reporters on a Media Consortium press call that existing programming in the area tends to cover St. Louis issues—not so much the issues in his suburban community. Curran also said that a station, which he hopes would run with help from the local high school, could serve as a means to keep the library relevant as a public institution in the long run.

Another group applying is the Austin-based Workers Defense Project, which has about 2,000 dues-paying members who work in Texas’ construction industry. Many of the group’s members are Latino immigrants and don’t speak English. There are Spanish-language broadcasters in Austin, says Patricia Zavala, the organization’s workplace justice coordinator, but they tend not to focus on issues specifically related to immigrant workers. In today’s corporate-dominated media landscape, an unapologetically pro-worker and pro-immigrant perspective is currently missing.

“A big reason [we applied] is for us to be able to control our own message of the work we’re doing, the struggle that we’re in, and the victories we have,” Zavala says. “Especially at the state level, there’s always people in opposition to the work we’re doing who find ways to distort what we’re saying and what this fight is really all about. We see this as a way to build our base and bring in our members to be informed with the things going on in our organization and within the movement.”

Zavala hopes the group’s station will broadcast news and political analysis in addition to educational programming designed to inform listeners on topics like American immigration law and their rights on the job.

In Beauford, S.C., the South Carolina Low Country Gullah People’s Movement seeks to preserve and promote the culture of the Gullah people. Descendants of African slaves who settled along the Atlantic coast in the southern United States, many of the people who identity with Gullah culture today are concentrated between Charleston, S.C. and Savannah, Ga. The community has faced increased challenges to land rights since the 1950s, says Moketsi, when developers expanded to South Carolina’s Sea Islands. “You have to be careful, once you start developing all of this rural land where these people have lived for hundreds of years, not to displace the culture,” says the organization’s director Jabari Moketsi. “And once you displace that culture, that’s when you lose the culture.”

Moketsi says a radio station would play a vital role in protecting and reproducing Gullah culture, in addition to strengthening ties among the existing community.

“We could use that station to put on forums—legal forums, educational forums, forums where people talk about land retention, finance, that kind of thing,” says Moketsi, who also edits The Gullah Sentinel, a local weekly newspaper. “We don’t have that direct media contact, that timely media contact, where we can get on the air right now and say, this is where there’s a meeting tonight. We need to let you know right now.”

Although the FCC’s application process ends on October 29, it could take anywhere from a few months to a few years after the deadline before the new stations are actually up and running. Smith says it will probably take more time for the FCC to issue licenses to aspiring stations in urban areas, where the FM dial is crowded and the unused frequencies face multiple competitors.

This reporting is supported by The Media Consortium.