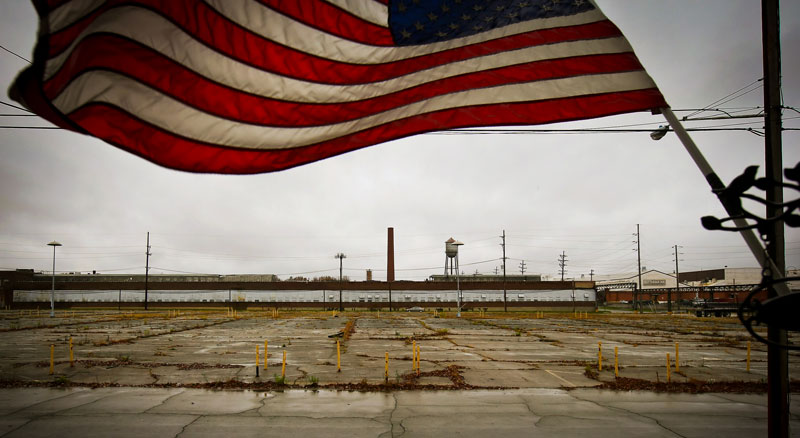 George Packer on the disappearance of the American Dream.

In accessible prose, Packer details the technical workings of the shop floor, the economics of small business competition, the investment banking industry, the suburban “growth machine” rigged housing markets, and, yes, how the legislative sausage is made.

The Unwinding: An Inner History of the New America, George Packer’s absorbing account of the 35-year shakedown of the U.S. economy by “organized money,” follows the life stories of three everymen struggling against mounting odds to make ends meet, economically and existentially. The Unwinding’s narrative begins in 1978—soon after 5,000 steelworkers lost their jobs to the abrupt closure of Youngstown Sheet and Tube—and demonstrates that in the subsequent collapse of the “Roosevelt Republic,” the money elites may have killed off the American democratic experiment for good.

“He was angry on behalf of the American people,” Packer says of Jeff Connaughton, one of his three lead characters, “not the poor, to be honest, who were always with us, but the people in the middle who had …worked hard and played by the rules and saw half their 401(k)s disappear in their late fifties just when they thought they’d saved for retirement and now were fucked.” Connaughton’s story frames the larger narrative of institutional disintegration and comes closest, one suspects, to reflecting Packer’s own moderate political bent. After a modest but solidly middle-class upbringing in Alabama, Jeff majored in business at the state U and, as a sophomore, was inspired to enter a life of public service by a characteristically charming, outsider-y debate performance by 36-year-old Senator Joe Biden in 1979. From that point on, he was determined to follow Biden all the way to the White House, which young Jeff regarded “the summit of American life.”

Upon graduation in the early ’80s, he earned an MBA—suddenly de rigueur for ambitious young white men at the time—and spent three years as a Wall Street bond trader, since “a job with a company that actually made things meant you were being left behind,” before landing his dream job as a rising staffer on Biden’s 1988 doomed presidential campaign, and then as a Biden fundraiser. Humiliated by his hero’s contempt for the increasingly necessary evil of political money-chasing, and convinced that he could “get things done” working in the presumed meritocracy of the private sector, he went to law school, worked as a Clinton White House staff attorney, and joined a high-profile lobbying firm. From that perch, he came to understand that “the Blob,” consisting of power couples and other unholy alliances forged along the “Wall Street-Washington axis,” pre-ordained regulatory outcomes with no accountability or rules of honor, and most certainly without merit. Eventually, he looks on helplessly as the Blob systematically guts any serious effort at financial reform after the 2008 collapse. Fed up and “radicalized,” Connaughton reverts to a quiet life in his native South, where his thwarted yearning for public service results in a book: The Payoff: Why Wall Street Always Wins.

The other two lead characters don’t have the resources to fare nearly so well. We are now “alone on a landscape without solid structures,” Packer writes, and the personal consequences of structural erosion over time have been brutal. Tammy Thomas, daughter of a heroin addict who abandoned her children, began life behind the eight-ball in a decaying black neighborhood in Youngstown and showed every sign of going down the same path when she got pregnant at 15. Instead, motherhood inspires her to fight like hell, and we follow her through the years as she stays one perilous step ahead of the rolling cyclone of industrial disinvestment, mass unemployment and street violence that forces her to move several times, losing home equity with each relocation. After getting her daughter through college on the decent but declining wages she makes as a unionized auto-parts worker, she accepts the GM buyout 13 years before retirement and invests a big chunk of money with a trusted relative in what turns out to be a real-estate Ponzi scheme.

The third main character, Dean Price, from the once-tobacco-rich Carolina Piedmont, tries desperately to hang on to his family’s small patch of land by opening an ill-fated string of truck stops serving locally produced food and, later, hatches a plan to manufacture biodiesel.

Less prominent characters similarly encounter American Dream-squelching circumstances: A Tampa, Fla. tradesman whose family is besieged by poor health goes from working as a grinder at a welding shop to living with his family on the edge of homelessness as several household members chase minimum-wage, low-hour jobs throughout the South. A a two-bit lawyer with deep, inherited Republican sympathies grows increasingly apoplectic as his doomed clients face insurmountable, Kafkaesque obstacles in the Tampa foreclosure courts.

As resourceful as these major and minor characters are, most of them occasionally skirt the law or otherwise behave badly in moments of desperation, greed or thoughtlessness. Packer is a novelist, with an eye for such moral intricacy, and that is part of what makes The Unwinding a gripping read. But what makes the book important is that it centers on the changing nature of work and, more subtly, its characters’ attachment to place. Although we learn a great deal about their personal lives, greater weight is placed on how their livelihoods are rendered obsolete over time. In accessible prose, Packer details the technical workings of the shop floor, the economics of small business competition, the investment banking industry, the suburban “growth machine” rigged housing markets, and, yes, how the legislative sausage is made.

Packer’s emphasis on work invites comparison with Studs Terkel’s Working, which offered a snapshot in time and place of early-’70s Chicago during the twilight of American heavy industry. Thematically and chronologically, Packer picks up more or less where Terkel’s interviews leave off, and both bring a documentary sensibility to their work.

Although The Unwinding is an exemplar of narrative journalism, it is not without flaws. Aesthetically off-putting lists of headlines introduce each chronological section and serve mainly to irritate. The puzzling two-page prologue seems tacked on as though Packer had lost heart in his own radicalization. “The unwinding is nothing new,” he tells us in good equivocating middle-brow fashion. “There have been unwindings every generation or two”—noncommittal blather that the book itself belies. And given the book’s time sweep and careful attention to detail, it would have benefitted mightily from an index—a reference tool all too readily sacrificed to the bottom line in nonfiction book publishing these days. One wonders what Packer’s high-end Farrar, Straus and Giroux editor was thinking on all these counts.

One wonders, too, why he didn’t include a public school teacher in a book about the institutional unraveling induced by our 35-year experiment with privatizing everything in sight. All too often, writers engaged in cross-sector, interdisciplinary analysis leave the cheese of education to stand alone, as though intimidated by the personal and policy decisions raised by our current educational morass, long in the making and awash in class and race issues (though Packer elsewhere fearlessly explores these).

Covering education, of course, would have also required Packer to engage the knotty question, “Education for what?” For what activities—economic, cultural, and personal—should we raise up coming generations, and with what dispositive knowledge? The United States is so unwound, at this point, its civic culture so fragmented, its people so mystified by the gutting of middle-class opportunity when they are not downright furious, that consensus on this weighty question seems more elusive than ever before.

And yet in spite of his own mounting fury (and rising deployment of the F-word), Packer detects signs of a rewinding. Tammy Thomas stays in Youngstown to work as a community organizer in neighborhoods she knows intuitively through deep multi-generational memory, determined to staunch the wounds of property abandonment caused by over 60 percent population loss citywide. Dean Price, graduate of Bob Jones University and son of an alcoholic fundamentalist preacher, finds inspiration in positive thinking tracts that steady his optimism that biodiesel can help restore the local economy, keep farmers on their land, and “reverse” what he sees as fossil-fuel-driven globalization. Then there’s Occupy Wall Street, depicted in all its indignation, exhilaration, inventiveness and squalor. Packer clearly hopes that “prairie populist” U.S. Sen. Elizabeth Warren will find ways to channel its grievances into new institutional forms.

Although Packer glimpses elements of a more durable common world, he recognizes that the obstacles to their realization are overwhelming. Toward the end of the book we learn that Peter Thiel—the famed Wall Street derivatives trader turned Silicon Valley hedge-fund titan who gave us Facebook, PayPal and a host of right-wing libertarian PACs—plans to end the “ideology” of death. To be more precise, Thiel’s Anti-Aging Project rejects “the inevitability of death for every individual.” Note the implication here: with new advances in medical technology, he believes, some individuals will eventually become immortal. Not surprisingly, that select few will be Thiel-like: visionary uber-tech entrepreneurs upon whom Thiel believes our collective well-being solely depends. Our “great task,” he has written, “is to find an escape from politics in all its forms” through technology.

We all live in Thiel’s politically degraded, existentially high-stakes world now. Gazing out over Zuccotti Park, one sympathetic trader, who had fretted for years about the growing global credit bubble, told Packer that Occupy “should be talking about the 0.1 percent, since he [the trader] was part of the 1 percent and he had no control over politicians.” Even he felt powerless. Which is why public-spirited young people no longer view the White House as “the summit of American life,” why rich Silicon Valley libertarians use their tech prowess to dabble in death-defying “solutions” for the few, and why the rest of us are left to face down the fiendish consequences of organized hubris alone.