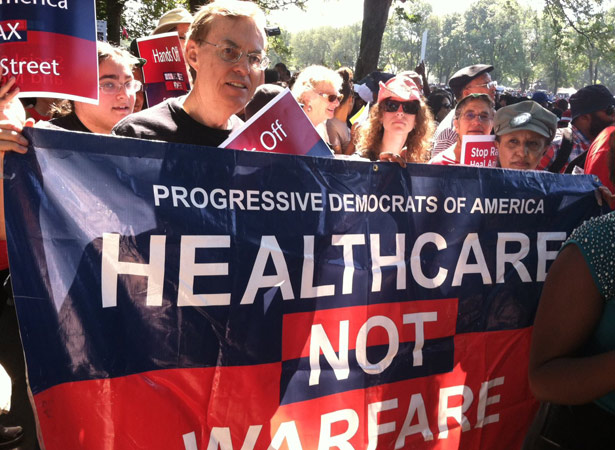 In addition to the roundtables, letter drops and protests are other vital components of PDA's Educate Congress efforts. (Photo from PDA)

Knights of the Progressive Roundtable

Monthly meetings give members of the public an intimate audience with Congressional representatives.

“One of the things I love about PDA is you stand up for ‘the little guy,’ and that’s what government’s all about,” Rep. Jim McGovern (D-Mass.) told roundtable participants in July 2013.

The process of passing bills doesn’t just happen in the halls of Congress. Around D.C., offices and meeting rooms are packed with elected officials strategizing legislation with lobbyists—who then may go out to the public to drum up support. As an answer to the cabal of corporate lobbyists engaged in this process, the advocacy group Progressive Democrats of America (PDA) has started a series of monthly strategy roundtables with left-leaning Congressional representatives and key staff. (Full disclosure: the present author is a member of the Tucson chapter of PDA).

With their give-and-take format, these meetings allow Congressional representatives and staffers to offer updates and insights on legislation and provide a platform for PDA representatives and allies to discuss ways to drum up public support around issues. A broad range of topics comes up at the forums—Wall Street reform, hunger, voting rights, immigration and more.

At the meeting, the Congress members reflected on recent legislative battles and discussed organizing tactics for the fall. In addition to fighting to protect earned benefit programs like Social Security, Medicare, Medicaid, unemployment insurance and supplemental nutrition programs, they reported that progressive Congressional representatives will be advancing bills in the coming months that would dramatically raise federal revenue, in order to combat the Republican push toward cuts and austerity.

“The Republicans have said they want to lower the number of loopholes and lower the [tax] rates. They’ve argued for budget neutrality,” said Ellison. “If they argue that, we will continue to suffer under sequestration cuts that we have seen this year.”

Sequestration refers to the $1 trillion in automated, across-the-board cuts that Congress agreed to enact if they could not reach a deficit reduction plan in 2011. Since no plan was crafted, sequestration cuts—which were designed to be painful and to hit all segments of the economy—began in March 2013.

Since then, sequestration has already knocked thousands of poor children off of the early childhood education program Head Start; devastated Meals on Wheels, which delivers hot meals to home-bound elderly; cut the National Institutes of Health budget by billions of dollars and hundreds of research grants; slashed funds for fighting forest fires during fire season; and caused the layoff of hundreds of teachers, Department of Defense civilians, public defenders, and others.

Ellison warned the assembled audience that such rolling sequestration cuts will continue, spurring more layoffs and furloughs of federal employees and crippling programs that serve millions of Americans.

The Robin Hood Tax to the rescue?

How do progressives suggest we get the money to end sequestration and fully fund these social safety net programs? The Robin Hood Tax. Officially known as the Inclusive Prosperity Tax, it would charge a tiny percentage tax on every Wall Street trade and raise up to $350 billion per year. More than 30 countries worldwide—including 11 in the European Union—have some form of a financial transaction tax like it.

“It is more than a revenue-generator. It is a market regulator, in that the financial transaction tax will slow down these erratic, flash trades, these algorithmic-driven trades where literally millions of trades are taking place over a very short period of time,” Ellison said.

The rationale is that if individual trades are more expensive—even to an infinitesimal degree—Wall Street gamblers will take the time to analyze them, rather than allowing computerized “micro-trading” to run rampant. According to Ellison, “This will help markets operate in a more sensible way.”

Michael Lighty, Director of Public Policy for the California Nurses Association/National Nurses United (NNU), offered statistics on the impact of Wall Street speculation on middle-class Americans. He claimed that up to $10 of every fill-up at the gas pump is related to speculation in oil prices.

Even hunger in America can be traced to financial speculation. According to Lighty, “It is estimated that 2 million people suffer from malnutrition because of speculation in the price of food.”

This food and oil speculation is aided by the use of fast-action computerized trading, which progressives hope The Robin Hood Tax would reduce.

Although he acknowledged that the tax reform debate “opens the window” for discussion of the Robin Hood Tax in Congress, Lighty also pointed out the necessity of gathering public support for the bill on a grassroots level. “[Advocacy groups] are going to have to light a ground fire to win this effort,” he said.

Ellison said that supporting the Robin Hood Tax would be an important role for legislators in the new fiscal year’s budget battles.

“The government and the people of the United States have the right to run the programs of the United States—health, welfare, housing,” Ellison said. The people who benefit from this infrastructure have a duty to support funding for it, he continued, and the Inclusive Security Tax is one method of raising that revenue.

“[House Republicans] do believe that plutocracy is the right model for America, and they’re striving to achieve it every day,” Ellison quipped. “We believe in democracy, so we’re not on the same page.”

Standing up for “the little guy”

Also at the roundtable, McGovern complimented PDA on their recent advocacy for what they view as high progressive priorities.

“One of the things I love about PDA is you stand up for ‘the little guy,’ and that’s what government’s all about,” he enthused, referring particularly to the group's recent campaign surrounding proposed cuts to the federally funded Supplemental Nutrition and Assistance Program (SNAP). “Donald Trump doesn’t need [Congress], but somebody who is unemployed or somebody who is working and making so little that they still qualify for [food stamps], they need us!”

In June 2013, PDA members nationwide mobilized to urge Congress not to slash food stamps and free or discounted school lunch programs for millions of Americans. Because of PDA’s hundreds of letter drops and street heat efforts outside the Beltway, McGovern said that the group “helped Democrats be Democrats” and reminded them of the importance of voting against food stamp cuts. “People here knew there was a movement out there that was absolutely against gutting the SNAP program,” he said.

Referring to future fights over food stamp funding, McGovern claimed that progressives are still “in the game” because of groups like PDA’s fights to mobilize support and education, both through the D.C. roundtables and localized campaigns at their home offices. “You are being heard,” he assured the members and allies.

All of the Congressional representatives at the roundtable thanked the assembled group for their input, but McGovern said it most eloquently.

“It’s helpful to have wind at your back,” he told the audience. “You are like a hurricane.”

PDA’s letter drops at Congressional district offices take place on the 3rd Wednesday of every month. The next Progressive Roundtable will be September 11, 2013 in the Rayburn Building. As with the July meeting, a live streaming connection will be available for anyone who wants to watch. Videos also will be posted on PDA’s YouTube channel.

Pamela Powers Hannley is the managing editor of a medical research journal, a progressive activist, and a political blogger from Tucson, Arizona.