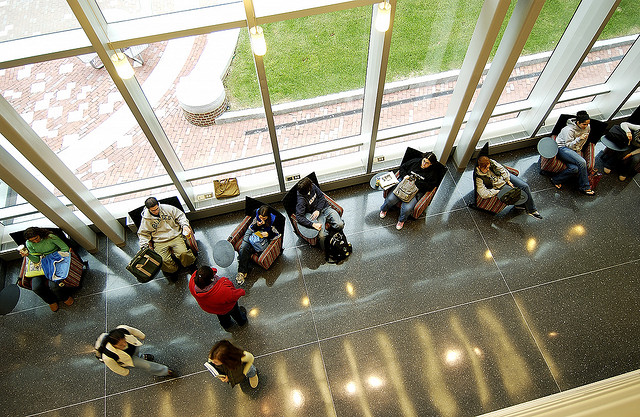 Northeastern University warned its part-time faculty that unionizing might impact the culture of 'direct communication' that 'will most effectively allow Northeastern University, our faculty and our students to meet the challenges that lie ahead.' (Kaplan International Colleges/Flickr/Creative Commons)

University Tries to Nip Professors’ Union in the Bud

A cautionary letter–and the rumored retention of a notorious union-buster–show Northeastern is nervous about adjunct faculty organizing.

Adjuncts, who typically work on a contract basis, are vulnerable to retaliation by university administrations. But Machson-Carter is hopeful that heavy-handed tactics by the university will galvanize, rather than chill, organizing efforts.

What does a research university in Boston have in common with the corporations Pfizer, Cablevision and IBM?

They hire the same union-buster. According to Adjunct Action, a project of the Service Employees International Union (SEIU), Northeastern University has retained Jackson Lewis, a law firm used by major corporations to thwart employee organizing efforts. The AFL-CIO calls the New York-based firm “the number one union-buster in America.” The move could signal intensified efforts by university administrations to defeat organizing drives among contingent faculty, which have been gaining momentum in several cities.

Adjunct Action has had modest success so far in its efforts to unionize non-tenure-track faculty at private colleges across Boston, which it began this spring. Part-time faculty at Bentley University and Tufts Colleges have already filed for union elections, which will be held this fall. Adjuncts at Northeastern have formed an organizing committee and other schools are well on their way, say union organizers.

Last week, part-time employees at Northeastern received a memorandum from Provost and Senior Vice President for Academic Affairs Stephen W. Director. The memo, obtained by In These Times, says that “some part-time faculty members have expressed concern about what they have described as intrusive behavior” by union organizers and assures faculty “that Northeastern University has not divulged your contact information to union organizers.” It continues:

Obviously, you have no obligation to speak with a union organizer or to respond to their contact efforts if you do not wish to do so.

We understand these recent efforts to contact our faculty are part of a larger effort, labeled “Adjunct Action,” to organize faculty members in Boston and the surrounding area.

… Ultimately, the decision about whether to support SEIU or not is yours. We do want to emphasize that the issue of union representation is of critical importance to every faculty member, including you, as well as to the University as a whole. Therefore, we urge you not to remain uninvolved. However you may feel about this issue, please make your voice count.

Anti-union letters and e-mails are a mainstay of employer efforts to counter employee organizing. According to a 2009 study by Kate Bronfenbrenner, director of labor education research at the Cornell School of Industrial and Labor Relations, employers used this tactic during 7 out of every 10 NLRB-supervised union representation elections between 1999 and 2003. Such communications are legal under the free speech provisions of the National Labor Relations Act, and have been a key component of employer campaigns since the 1970s. But Broffenbrenner's study notes that as the “union avoidance” industry has grown more sophisticated during the past two decades, such actions have been followed with increasing frequency by more punitive tactics such as retaliatory firings, which are illegal. Adjunct Action says that Northeastern’s decision to hire Jackson Lewis could presage a more aggressive anti-union campaign.

(Northeastern University confirmed that the memo had been sent to faculty, but did not respond to a request for comment on whether it had retained Jackson Lewis. The law firm also declined to comment).

The memo goes on to express concern about the effect that a union would have on the “collaborative” culture of the university:

All of our faculty—tenured, tenure-track and non-tenure track—play critical roles in Northeastern University’s success. Over the years, the faculty and the administration have fostered an extremely collaborative relationship built upon mutual respect and trust. We believe this dynamic, which rests upon direct communication, will most effectively allow Northeastern University, our faculty and our students to meet the challenges that lie ahead. We encourage all of our faculty members to work directly with the University on any issues or concerns they may have. We are concerned about the impact that ceding your rights to do so to an outside organization, which is unfamiliar with our culture, will have on our community.

“The letter doesn’t resonate with my experience working at Northeastern,” says Abigail Machson-Carter, an adjunct professor who teaches writing to international students in the university’s Global Pathways department and is a supporter of the union effort. “There isn’t much direct communication between administrators and part-time workers. They offer us a contract, and we can either sign it or not.”

Machson-Carter has another part-time job at UMass Boston, where adjuncts are unionized, that supplements her income and provides health insurance. But she says that for many of her co-workers, the issue of a union “is a quality of life issue.” Adjuncts are typically paid by the course, and the average rate is $2,900, according to crowd-sourced figures from the website the Adjunct Project. This amounts to an average hourly wage of $8.90 an hour, with 4 in 5 adjuncts earning less than $20,000 annually. Most lack access to health insurance. At Northeastern, rates per course range from $2,200 for sociology courses to $11,250 for computer sciences courses, according to the crowd-sourced data.

Such salaries have become the rule rather than the exception, with America’s non-tenure-track faculty now making up nearly two-thirds of the teaching workforce in higher education. SEIU, which currently represents 15,000 adjuncts nationwide, is intensifying its efforts to unionize them, as are a handful of other non-academic unions.

As I’ve reported previously, labor’s emerging focus on contingent faculty suggests promising new directions for organizing precarious workers. Inspired by successes in Washington, D.C., where SEIU Local 500 now represents a majority of part-time faculty across the metro region, the union has launched campaigns in Boston and Los Angeles with the eventual goal of creating citywide bargaining committees that can represent part-time faculty who juggle multiple jobs on multiple campuses. These efforts, as well as a similar campaign by the United Steelworkers in Pittsburgh, are modeled in part off of the “metro strategy” outlined by labor educator and contingent faculty activist Joe Berry in his book Reclaiming the Ivory Tower. Berry argues that contingent faculty must organize industry-wide to change their own working conditions and combat the corporatization of the university.

While many adjuncts are currently represented by one of three national academic unions, non-academic unions like SEIU and USW are focusing their efforts on private colleges and universities, where part-time faculty are for the most part unorganized at present. Given that there are also substantial legal barriers to collective bargaining by full-time faculty and graduate student workers at private schools, successful campaigns to unionize adjuncts would break new ground.

But the “union avoidance” industry, on which Jackson Lewis literally wrote the book, has excelled at frustrating labor’s efforts to make inroads into unorganized industries. For example, the firm has helped block efforts by the United Federation of Teachers to increase unionization in New York City charter schools, according to the union.

One of the ways that Jackson Lewis recruits new clients, notes London School of Economics professor John Logan, is through seminars “stressing that ‘militant organizing unions’ such as SEIU are targeting firms in hither to union-free sectors of the economy.” In These Times sent an undercover reporter to one such seminar held by Jackson Lewis in 2007.

This isn’t the first time that a university has retained a union-busting law firm. Reached by e-mail, New York University (NYU) professor of social and cultural analysis Andrew Ross notes that the NYU administration retained both Jackson Lewis and Proskauer Rose during a protracted fight with its Graduate Student Organizing Committee (GSOC), which lost recognition after its contract expired in 2005.

“Under the direct guidance of these legal consultants, the NYU administration followed each page from the union-busting playbook,” writes Ross, who is also a co-editor of the anthology The University Against Itself: the NYU Strike and the Future of Academic Labor.

In 2000, GSOC negotiated the first-ever contract between graduate employees and a private university. But a 2004 ruling by the Bush-era National Labor Relations Board reversed an earlier decision and denied graduate students union recognition under the logic that they are students, rather than employees. As Josh Eidelson reported, nothing in the NLRB ruling prevented NYU from continuing to negotiate with the union, but the school decided to withdraw recognition. The university reportedly retained Jackson Lewis when graduate students continued to agitate for renewed negotiations after the contract expired in 2005. A bitter strike in 2006, during which 20 strikers were fired, ended without a contract.

“Who knows how many millions of dollars have been lavished on these firms, simply to prevent graduate employee unions from obtaining a foothold in the private sector?” asks Ross.

Recent organizing by contingent faculty has been met with similar tactics. A fight for union recognition by adjuncts at American University, which they won in February 2012, drew the support of students who accused the university of union-busting, and inspired a new spin on a popular picket-line chant: “What’s disgusting? Union-busting! What’s outrageous? Adjunct wages!”

“When an institution decides to spend tuition money on anti-union activity they often contradict their own stated values on free association and workers rights—something which students, who are paying enormous tuition bills, don’t take kindly to,” writes Anne McLeer, director of higher education and research for SEIU Local 500 in Washington, D.C., to In These Times via e-mail. “Plus, they could use that money to better compensate adjuncts.” She says that where D.C.-area adjuncts have won unions, institutions have adopted a more collaborative posture.

Meanwhile, Duquesne University in Pittsburgh is seeking to void a vote by its adjuncts to form a union under the rationale that the university’s affiliation with a Roman Catholic order should exempt it from the jurisdiction of the National Labor Relations Board. As Mark Oppenheimer, reporting for the New York Times, put it: “Catholic moral theologians say Catholics have a special duty to recognize unions—and Catholic administrators say their university has a special right not to.”

Adjuncts, who typically work on a contract basis, are vulnerable to retaliation by university administrations. But Machson-Carter is hopeful that heavy-handed tactics by the university will galvanize, rather than chill, organizing efforts. “For a lot of people, this was the thing that really fired them up,” she says of the provost’s letter and the university’s reported consultations with Jackson Lewis. “The fact that instead of putting money into quality teaching or professional development, they’re spending it on a law firm … makes us more determined to have a voice in what’s happening at the school in the future.”