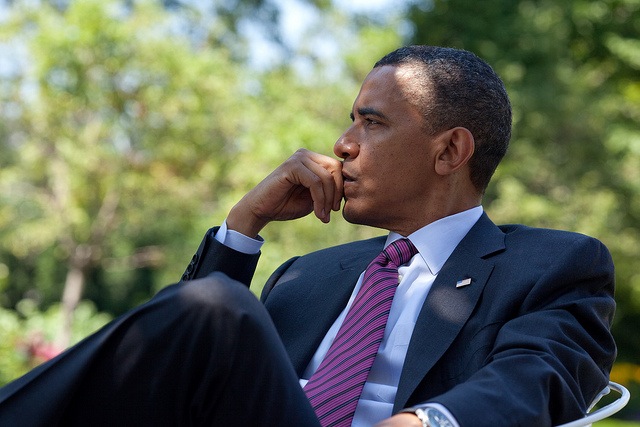 Can we really pretend to know the full consequences of a strike on Syria? (Pete Souza/Flickr/Creative Commons)

What Would a ‘Surgical Strike’ on Syria Really Look Like?

The only thing ‘surgical’ about an airstrike is the blood it leaves behind.

Obama’s quick and surgical lesson to Assad will turn into something else entirely if Israel is brought into the picture. And it won’t be pretty.

Western leaders are at pains to stress that the purpose of military action against Syria, if and when it happens, will be to send a message to President Assad that the use of chemical weapons is unacceptable. The goal, they have said repeatedly, is not regime change.

That is ethically problematic—the subliminal message is that killing 100,000 civilians is OK, as long as chemical weapons aren’t used—and strategically inept. With its history in Vietnam and Iraq, America should be only too aware that wars have a habit of going awry and even the best-planned military operation can end very badly.

Most of all, it's logically inconsistent. All the Western leaders involved have already called for the end of Assad’s regime, so what’s the point in teaching him a lesson? Surely the purpose of a lesson is to ensure better behavior the next time? But none of those involved want there to be a next time, so wouldn’t it make sense just to get rid of Assad and be done with it?

A strike that does not aim at getting rid of the Assad regime only makes sense if the objective is to deter other would-be users of chemical weapons. There’s at least some sort of logic in that, though it’s of dubious value. After all, the death penalty in the U.S. does not deter murder and harsh prison sentences don’t deter drug use. Launching missile strikes on military facilities in densely-populated areas on the off-chance that some future dictator might be deterred from using chemical weapons does not strike me as being adequate justification—particularly in light of the risks.

It’s true that proponents of a quick, surgical strike can point to the air campaign against Gadaffi’s Libya in 2011 and the NATO air strikes against Belgrade in 1999, both of which remained (more or less) within their defined parameters and led to positive outcomes, at least as far as the West was concerned. Those, no doubt, are the success stories that Obama, Cameron and Hollande have in mind as they plan their new adventure.

Syria, however, is an entirely different beast and its situation, both on the ground and diplomatically, bears little resemblance to Yugoslavia in 1999 or Libya in 2011. There are so many critical variables in Syria—not least the presence in strength of al-Qaeda among the rebels, the proximity of Israel and the diplomatic support of Russia—that the previous two campaigns look almost elementary by comparison.

Russia initially condemned the bombing of Yugoslavia, but it changed its tune once the campaign had begun and urged Milosevic to surrender, which he did the same day. In Libya, Russia declined to veto the air umbrella resolution in the UN Security Council, thus giving the campaign UN legitimacy. Apart from the odd statement, it made no effort to halt or impede the campaign.

The Russia of 1999 was reliant on Western aid and thus susceptible to pressure to withdraw its support from Milosevic. In Libya, Russia had pretty much given up on Gaddafi by the time the air campaign began and recognized the anti-Gaddafi transitional council shortly after. But things are different today. Russia in Putin’s second term is an economically confident, muscle-flexing bully on the lookout for opportunities to rub western noses in the sand. Obama and co. seem determined to give him the opportunity by bombing a strategic ally and vassal state.

I, of course, have no idea how Russia will react to a strike against Syria. Conceivably, there are contacts underway to ensure Russia’s quiescence, if not its support. It is also conceivable that a western air campaign will give Russia the exit strategy from an awkward diplomatic alliance that it secretly wants. Many things are conceivable.

It is just as conceivable that attacking Syria will unhinge Putin sufficiently (he is already halfway there) to plunge the world into a new cold war. Russia’s diminutive dictator seems to be looking for trouble and he can certainly find it in the enflamed and unpredictable Middle East.

Which brings us to Israel. Perhaps the greatest risk of the looming strike is the possibility that Assad or one of his generals might retaliate by launching missiles at Israel. Assad might be more quiet-spoken than Saddam Hussein, who fired missiles at Israel in 1990 after being attacked by a US-led coalition, but I doubt whether he’s much more sane—and he comes from the same eye-for-an-eye tradition. It’s entirely possible that Israel will become the proxy target of Syrian missiles—and if that happens, it’s a game-changer.

Obama’s quick and surgical lesson to Assad will turn into something else entirely if Israel is brought into the picture. And it won’t be pretty. The conspiracy theorist in me questions whether that is not the idea, in fact. After Iraq and Afghanistan, Obama is in no position to put boots on the ground, which is what is required to get rid of the Assad regime. But sitting right on Syria’s border is hot-headed little Israel, armed and Holocaust-primed to go.

A few cruise missiles fired at Damascus, a couple of missiles on Tel Aviv in response and … Bob’s your uncle! Regime change, courtesy of Israel. Over the top? Perhaps. But very strange things tend to happen in the Middle East.

What’s certain is that civilians will be the victims of any attempt to teach Assad a lesson and nothing will turn out exactly as planned. Obama, Cameron and Hollande would do well to think long and hard before launching their cruise missiles.

Reprinted with permission from The Kibbitzer.

Roy Isacowitz is a journalist and writer living in Tel Aviv.