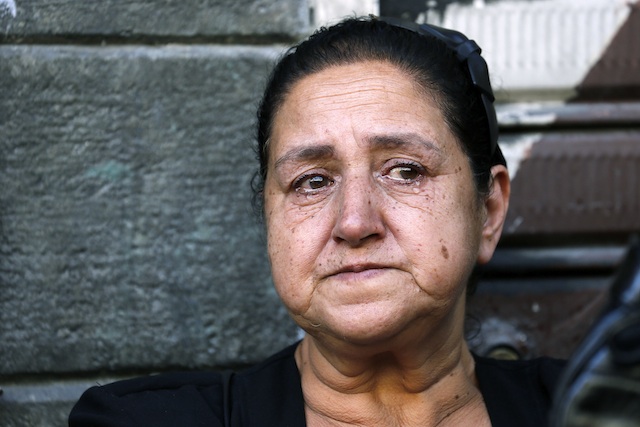 A woman's eyes tear at a funeral march for three Christian government soldiers killed by opposition fighters this weekend in Maalula, Syria. The fighters reportedly forced at least one Christian to convert at gunpoint, highlighting the complexity of a conflict where neither side can truly claim to be democratic-secular. (Anwar Amro/AFP/Getty Images)

Is There a Method to the Syrian Madness?

On radical-emancipatory movements and false rationales for war.

The ongoing struggle there is ultimately a false one, a struggle towards which one should remain indifferent

As I have written before, we all remember President Obama's smiling face, full of hope and trust, when he repeatedly delivered the motto of his first campaign, “Yes, we can!”—we can get rid of the cynicism of the Bush era and bring justice and welfare to the American people. Now that the United States is backing off its push to attack Syria, we can imagine peace protesters shouting at President Barack Obama: “How can you advocate another military intervention?” Obama the reluctant warrior looks back at them and murmurs perplexed: “Can I? Should I?”

And this time, he is right to second-guess himself. All that was false in the idea and practice of humanitarian interventions explodes in a condensed form apropos Syria. OK, there is a bad dictator who is (allegedly) using poisonous gases against the population of his own state. But who is opposing his regime? It seems that whatever remained of the democratic-secular resistance is now more or less drowned in the mess of fundamentalist Islamist groups supported by Turkey and Saudi Arabia, with a strong presence of al-Qaeda in the shadows.

As for Assad, his Syria at least pretends to be a secular state, so no wonder that Christian and other minorities now tend to take his side against the Sunni rebels. In short, we are dealing with an obscure conflict, vaguely resembling the Libyan revolt against Gaddafi. There are no clear political stakes, no signs of a broad emancipatory-democratic coalition, just a complex network of religious and ethnic alliances overdetermined by the influence of superpowers (the United States and Western Europe on the one side, Russia and China on the other). In such conditions, any direct military intervention means political madness with incalculable risks. What if radical Islamists take over after Assad’s fall? Will the United States repeat their Afghanistan mistake of arming the future al-Qaeda and Taliban cadres? What if the U.S. missiles or bombs land on Syria’s stockpile of Sarin gas weapons? After the attack, then what?

In such a messy situation, military intervention can only be justified by a short-term, self-destructive opportunism. The moral outrage evoked to provide a rational cover for the compulsion-to-intervene—“We cannot allow the use of poisonous gases on civil population!”—is a such a sham, it doesn’t even take itself seriously. As we now know, the United States more than tolerated the use of poisonous gases against the Iranian army by Saddam Hussein. During the Iraq-Iran war of 1980-1988, the United States sided with the Iraqis to quell Iranian influence in the Gulf, despite being well aware of Iraq’s liberal use of mustard and tear gas, according to declassified government reports. The United States even secretly supplied Iraq with satellite images of Iranian battlefield weaknesses to aid in the targeting of Iranian troops. Where were moral concerns then?

The situation in Syria should be compared to the one in Egypt. Now that the Egyptian Army has broken the stalemate and cleansed the public space of the Islamist protesters, the result is hundreds, maybe thousands, of dead. One should take a step back and focus on the absent third party in the ongoing conflict: the explosion of heterogeneous organizations (of students, women, workers) in which civil society began to articulate its interests outside the scope of state and religious institutions. This vast network of new social forms is the principal gain of the Arab Spring, independent of big political changes like the Army’s coup against the Muslim Brotherhood government or the Assad regime’s war with Islamist extremists. It goes deeper than the religious/liberal divide. (And even in the case of clearly fundamentalist movements, one should be careful not to miss their social component.)

The only way for the civil-democratic protester—in Tunisia, Egypt, Libya or Syria—to avoid being sidestepped by religious fundamentalists is by adopting a much more radical agenda of social and economic emancipation.

And this brings us back to Syria: The ongoing struggle there is ultimately a false one, a struggle towards which one should remain indifferent. The only thing to keep in mind is that this pseudo-struggle thrives because of the absent Third, a strong radical-emancipatory opposition whose elements were clearly perceptible in Egypt.

As we used to say almost half a century ago, one doesn’t have to be a weatherman to know which way the wind blows. In Egypt’s case, I’ve argued, it blows toward Iran—and in Syria, it blows toward Afghanistan. Even if Assad somehow wins and stabilizes the situation, his victory will probably breed an explosion similar to the Taliban revolution that will sweep over Syria in a couple of years. What can save us from this prospect is only the radicalization of the struggle for freedom and democracy into a struggle for social and economic justice.

So what is happening in Syria these days? Nothing really special, except that China is one step closer to becoming the world’s new superpower while her competitors are eagerly weakening each other.