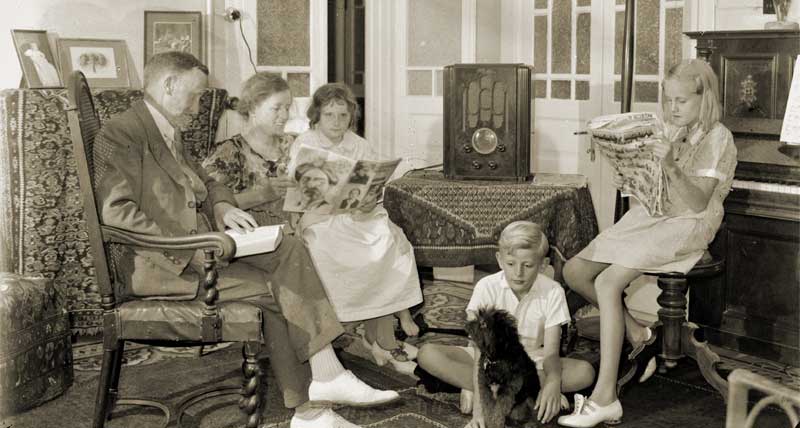 A family sits around the radio reading, in a precursor to today's 'digital media hub.'

What a Tangled (World Wide) Web

Have our youth lost the gift of boredom?

And where I am left with one or two indecipherable photographs and boxes full of letters, they will have thousands of ephemeral photographs of themselves and their friends, but no letters. Will they have what they need to jog their memories and compare their grandchildren’s youth with their own?

Parents and grandparents who are not literate themselves and who watch their children learning to read and write may feel rather as I feel: that the young inhabit a different universe. I can’t decide whether we were young in the way people are young today. Was my youth, and even my children’s youth, lived somewhere else, in a place that didn’t prepare us all that well for this one? Perhaps what’s wrong is the habit of starting from one’s own memories when you’re trying to understand what it’s like to be someone more than 60 years younger than you are.

When my grandchildren tell me about their travels, I follow them partly by recalling my first times away from home: going abroad after the end of the war, staying with a French family, first in Paris and then in Normandy, and a year or two later with a German family in Cologne. I remember that the chairs in the French family’s salon were always covered in ghostly dust-sheets, and that the son of the family had failed his exams and was required to swallow a test tube of blood (source unknown) with his tartine and café au lait at breakfast every morning to improve his grades, and that he had bifteck for dinner. The German family I stayed with in 1949 lived in magnificent style, it seemed to me, with goosefeather quilts, cream cakes and a maid. In each case, I was away for a month at least, and it didn’t occur to me to phone my parents, though I hope I sent them a postcard. Perhaps the supposed educational benefits of such visits were thought to compensate for any worries my parents might have had, and for the terrors I sometimes experienced among these alien beings who were so attached to their own languages.

I certainly worried when my children spent their months abroad in the early 1980s, two of them in the United States, one in Damascus for months. Telephoning was expensive, and rarely happened, though by then we’d have thought it reasonable in an emergency.

This summer, two granddaughters have, separately, narrowly missed major train crashes in France and in Spain, and have encountered for the first time on their own the bizarre customs of foreigners, especially those to do with food, dress and what counts as pleasure. They took photographs of these curiosities and communicated their amazement to hundreds of “friends” from all over the world via Facebook and texting. Throughout their times away, they were in contact with parents, friends and even grandparents.

And where I am left with one or two indecipherable photographs and boxes full of letters, they will have thousands of ephemeral photographs of themselves and their friends, but no letters. Will they have what they need to jog their memories and compare their grandchildren’s youth with their own?

It seems all this instant and easy communication has altered the way we know and relate to other people. Intimacy itself, confiding in others, privacy, solitude, perhaps even conversation, must be affected by all this cheap and sped-up contact. Everyone’s a potential celebrity, making their mark on the world, ready to reveal a carefully edited version of it all to a vast circle of “friends.”

Ofcom, a communications watchdog in the UK, reports that families are more likely to watch television together than they once were. But this renewed “togetherness” is not quite what it seems, since most family members, regardless of age, bring a smart phone, a laptop or a tablet to the communal watching. We’re getting used to the ceaseless clicking that accompanies meals, journeys and chats. The family living room is now a “digital media hub,” delivering as well as receiving an unstoppable flow of news and opinions.

Today, 20 percent of young people in Britain have no work. The young have lost more in terms of education, financial support and future prospects from austerity than other groups. My generation grew up in austerity, but we knew things would get better, and they did. Yet the liveliest memory I carry from my adolescence is, paradoxically, of boredom, on Sundays especially, when everything was closed and there was nothing to do. My grandchildren click their way out of boredom and stay in touch. We live and we learn from them.