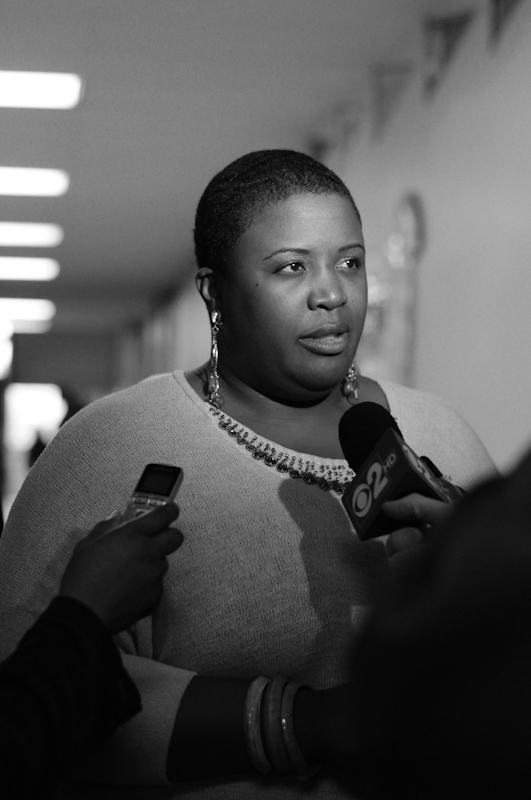 Cleopatra Cowley-Pendleton, whose daughter Hadiya was killed in a gun attack last January in the South Side of Chicago, has become a vocal advocate in the battle against gun violence. (Joyce Lee)

Will U.S. diplomacy in Syria carve a new path towards peace at home and abroad?

The example of our leaders cannot help but guide the thinking of our youth: Might makes right and those who are 'wrong'--who disagree with our worldview--are The Other, ever-more-easily transformed into an enemy to be dealt with by whatever means necessary.

I am more than pleased today. For the first time that I can remember, well at least since the Cuban missile crisis, the United States has chosen diplomacy over force to resolve an international conflict. We have taken a breath, stopped the worst of the bellicose rhetoric, put the guns away and found a peaceful solution to what only a week ago seemed an irreversible march to war.

On a personal level I am relieved because I head to the Middle East a few weeks from now and didn’t relish the idea of adding a gas mask to my luggage.

As one, like many, whose support of President Obama is partially premised on his ability to discern the difference between a necessary and unnecessary war, I am relieved to see that leadership in action—however, late it was in coming.

But I also have another reason—one closer to home. I live in Chicago, a city sadly now synonymous with gun violence. Much of my work is in communities where virtually every family has a family member, friend or acquaintance who has been a victim (either as the shooter or the shot) of gun violence.

A few weeks ago I spoke at Stateville Correctional Center, an Illinois Maximum Security Prison, to a group of 40 men, ranging from about 25 to 70—virtually all of whom had been convicted of murder. We talked and they explained why they had killed. While some were at the scene of a robbery most said they killed to “protect the threads, wheels, corner or women” they saw as within their defensible space, their world.

These sentiments and reasons were echoed in a discussion I was in recently with women from the South Side, who talked about the challenge they faced in keeping their remaining children, brother, husbands—and now even their girls—out of harm’s way.

Unwilling to wait for and dubious about the prospects or effectiveness of congressional action, they spoke about their attempts to shield their young from a culture of violence—on television, in the movies and on video games—and their efforts to define manhood as something other than having the biggest gun.

As I drove home (ironically having to stop for 20 police cars racing to the latest shooting around the corner from the church where we had been meeting), I thought about what they had said and also about Syria, about Iraq, about Iran, about Grenada, about Vietnam.

As parents we try to model good behavior, through our actions we try to provide examples of how to deal with the hand that life has dealt. Yet we are not the only— let alone the strongest—influences in our children’s lives.

Our children, be they 10, 20, 30 or 40, have grown up in a context of non-stop war. They have watched not only “the axis of evil” but also their ultimate role models—their presidents, from Kennedy to Johnson to Carter to Reagan to Clinton to Bush—turn to weaponry to resolve disputes large (Iraq) or small (Grenada). They have watched the creation of the “other” whose instant demonization once they become the enemy somehow justifies and lessens the horror of the death and destruction they endure. They have watched government-sponsored assassinations, once considered shocking, become a topic for public conversation, with the details of who orders the “hit” and under what circumstances—rather than the validity of the fundamental action—the only question discussed. And they’ve learned a new term “collateral damage” for the non-combatants—the women and children killed. You know, those like the scores of Hadiyas hit by a misfired or stray bullet.

Youth might also notice how quickly our former allies (some would say puppets)—from the Taliban to Saddam Hussein, from Noriega to Assad—are transformed into dangerous monsters who threaten our very existence and must be eliminated (sometimes figuratively, sometimes literally).

And while the territories and resources that the United States fought over are larger than the corner or possessions for which the young kill, the example of our leaders cannot help but guide the thinking of our youth: Might makes right and those who are “wrong”—who disagree with our world view—are The Other, ever-more-easily transformed into an enemy to be dealt with by whatever means necessary. Urban youth might well (and do) argue in their defense that the threat they face each day is far greater and more imminent than those faced by the nation during the recent wars we’ve chosen to fight.

I no more than anyone else knows if the diplomatic solution into which our president and the nation have “fallen into” will work. The seeds of the conflicts in the Middle East were planted long ago when, with American complicity, France, England and Russia redrew the map of the region to meet their own imperial needs. That said, those who are tired of war abroad and on the streets of our cities should hope diplomacy carries the day. We must be openly supportive of the process, both for what it could mean for a resolution of conflict in Syria, but more importantly, for the lesson it offers those who will guide the future.