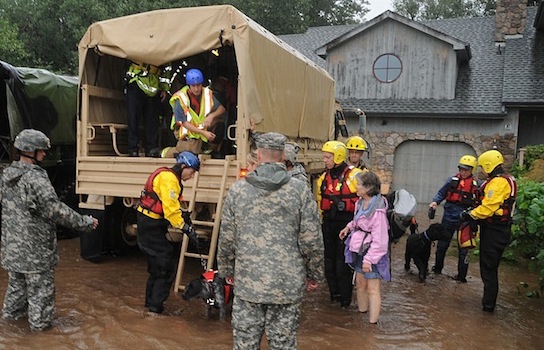 Floods in Colorado hit, literally, close to home, a reminder that 'out of sight, out of mind' is no longer a viable excuse for ignoring climate change. (Joseph K. VonNida / United States Department of Defense)

Climate change: You can run, but you can’t hide.

The deluge illustrates the problem with officials pretending that environmental stewardship and the precautionary principle are just aristocratic priorities. They are quite the opposite—they are priorities for everyone.

Two months before my Colorado community was overwhelmed this week by epic rains, our state’s chief oil and gas regulator, Matt Lepore, berated citizens concerned about the ecological impact of hydraulic fracturing and unbridled drilling. During his speech, Lepore insinuated that those advocating a first-do-no-harm posture toward fossil fuel development are mostly affluent and are therefore unconcerned with the economic impact of their environmental advocacy. Coming from an industry lawyer-turned-regulator, it was a deceptive attempt to pretend environmental stewardship is merely a rich person's luxury.

After this week's flood, of course, “thousands of oil and gas wells and associated condensate tanks and ponds” are underwater in Colorado, according to the Boulder Daily Camera. Already, there is at least one confirmed oil pipeline leak. At the same time, the Denver Post reports that “oil drums, tanks and other industrial debris mixed into the swollen [South Platte] river.”

In short, there’s a serious possibility of an environmental disaster that should concern both rich and poor.

In retrospect, the deluge illustrates the problem with officials pretending that environmental stewardship and the precautionary principle are just aristocratic priorities. They are quite the opposite—they are priorities for everyone.

That, though, is only one of the big takeaways from this thousand-year flood. Another is the lesson that in the age of climate change and severe weather, the old “out of sight, out of mind” defense mechanism should no longer provide comfort to anyone. Consider my family’s own microcosmic experience.

Living in southeast Denver, we were worried about Cherry Creek overflowing into our neighborhood. Thankfully, that didn’t happen. So in “out of sight, out of mind” fashion, we could have just ignored the damage just a few miles away.

But, then, inconvenient truths inevitably started creeping in. For example, Climate Central's Andrew Freedman reported on data that suggested that the flood was exacerbated by human-intensified climate change, and Colorado should therefore expect these deadly floods in the future. So while we initially felt we could breathe a little easy this time around, we know that there will probably be a next time when we may not be so fortunate. Meanwhile, we may not emerge unscathed from this flood after all.

Why? Because regulators permitted oil and gas rigs on a flood plain. That means the entire region faces the prospect of chemical spills and all their attendant health and environmental consequences.

All of this leads to a conclusion best summed up by an old cliché: When it comes to something as monumental as climate change, you can run, but you can’t hide. That conclusion consequently leads to another cliché: We here on Spaceship Earth are all in this together.

Now here's the good news: There are simple things we can do to protect ourselves.

When it comes to energy development, environmental regulators can stop behaving like de facto corporate lobbyists; legislators can tighten oil and gas regulations; and sitting authorities can employ the “first do no harm” mentality before permitting more fracking and drilling.

Most important, all of these officials can begin factoring in meteorological reality when making energy development decisions. Incredibly, that's not happening in many places right now, according to the Government Accountability Office. In its recent report, the GAO found that officials still “have not systematically considered climate change in infrastructure planning.” That can—and must—be fixed.

Now, sure, you can oppose these steps by convincing yourself that you personally have nothing to worry about. But when these kinds of solutions are so straightforward and the consequences of inaction are so severe, is that really prudent? There are thousands of flooded oil and gas rigs here in Colorado that prove it isn’t.