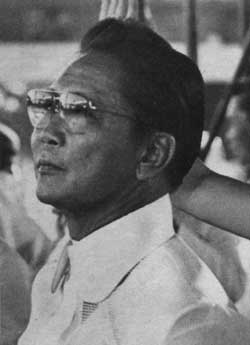 BY Lucy Komisar
Share TweetReddit0 EmailPrint
Corporate corruption scandals roil the United States, dragging down with them the reputations of the major accounting firms that signed off on–or even designed–fraudulent financial practices. These global auditors were supposed to keep corporations honest. But a closer look at Switzerland, the birthplace of financial legerdemain, shows that accounting deceit is nothing new. Western financial managers cut their teeth designing systems for Third World dictators to loot their countries.

Perhaps the most notorious example is Ferdinand Marcos, who is suspected of stealing at least $10 billion from the Philippines before being overthrown in February 1986. The Philippine government has spent more than 15 years trying to track and recover the money, some of which was secreted away by Swiss bankers and stashed in offshore havens.

Now, a former attorney with accounting firm KPMG in Zurich has come forward claiming she has evidence that on March 23, 1986—just a day before a freeze would be placed on Marcos’ accounts—KPMG secretly transferred $400 million from Credit Suisse Zurich to a Liechtenstein trust on the ex-dictator’s behalf.

The attorney, Marie-Gabrielle Koller—named in this article for the first time—first testified about the events behind closed doors before a French parliamentary commission in May 2000. Its report referred to her only as “Madame Z.” Last year, the Quebec native sent her information to U.S. authorities, but elicited no interest from Washington. Now Koller, 46, has privately offered to provide evidence to the Philippine government in exchange for a cut of the amount recovered. With interest, the hidden $400 million would be worth twice as much today.

Koller didn’t join KPMG until 1996, when she was assigned to the Credit Suisse account—a decade after the Marcos government fell. She learned of the midnight Marcos money-laundering operation from a colleague that year, after a Zurich court ordered the transfer to the Philippines of another account—originally worth $356 million—frozen in Switzerland since 1986.

That money had been held on the basis of documents found in the Presidential Palace days after Marcos fled to Honolulu in February 1986. But there were no documents about the $400 million. Bank officials had been warned that the Swiss Banking Commission, bowing to international pressure, was about to freeze all suspected Marcos accounts.

So, in the dead of night on March 23, 1986, lawyers for KPMG (then known as Fides, a subsidiary of Credit Suisse) moved the $400 million in Marcos funds to a Liechtenstein trust, Limag Management und Verwaltungs AG—which dispersed the money via new secret “foundations” (in German, anstalts). Limag AG was headed by Peter Sprenger, also the director of Liechtenstein’s Credit Suisse Trust AG and parliamentary leader of the Vaterlandische (Fatherland) Union, one of Liechtenstein’s conservative main parties.

Europeans joke that Liechtenstein is where Swiss bankers go to hide their money. The tiny country, just 72 miles east of Zurich, is the place where the Swiss send their dirtiest customers. Liechtenstein has gotten rich by laundering the money of drug traffickers, Mafiosi, tax cheats and other criminals. A 1999 report from the German secret service described Liechtenstein as a criminal state in the middle of Europe. The German finance minister denounced the country as “a worm in the European fruit.”

Indeed, when clients wanted to transact “sensitive” business, KPMG referred them to associates in Liechtenstein—with the assurance of added secrecy and protection from foreign law enforcement inquiries. Koller says even Liechtenstein was initially “unhappy” with Marcos’ money being transferred there, but Limag resolved the problems by giving a well-paid board chairmanship to Prince Constantin, the elderly uncle of constitutional monarch Prince Hans-Adam II.

“The bank bought the Prince’s uncle,” Koller explained to the French parliamentary commission that was investigating money-laundering in Switzerland. “Everybody is bought in Liechtenstein.”

In 1997, Koller was fired by the manager of KPMG Zurich (which had been made independent of Credit Suisse—at least officially—so that it could continue as its auditor under new accounting regulations). She was sacked after testifying against a Credit Suisse Trust AG client who was involved in a conspiracy to sell tainted blood forcibly taken from prisoners by the Stasi, the East German secret police.

In addition, Koller believes she was fired because Credit Suisse realized that she—like other KPMG and bank employees— knew what happened to the Marcos money. She told the French inquiry: “My superior told me … that I would never work again as a lawyer and that my career was finished in Switzerland and in Liechtenstein because I had spoken to the authorities. “

So in February, Koller anonymously approached the Philippine government through her attorney, Ian M. Comisky of high-powered Philadelphia law firm Blank, Rome, Comisky & McCauley, which has close ties to the Bush administration.

In his letter, Comisky wrote, “KPMG-Fides and Limag AG employees made admissions regarding the transfer of the Marcos monies to Liechtenstein, and our client has contemporaneous memoranda prepared at the time of the admissions.”

The letter, obtained by In These Times, also notes that Credit Suisse financial statements did not reveal its relationship to Limag AG—though Credit Suisse Trust AG and Limag AG share an address in Vaduz, Liechtenstein’s capital.

In exchange for the documents, Comisky asked that his client receive $125,000 up front and then another $100,000 plus 2 percent of the amount recovered. Given Switzerland’s banking-secrecy laws, and KPMG’s past record, Koller is also asking that the Philippine government pay the costs of any litigation arising from her cooperation with it. And she wants a “compulsion order,” so that she will have a defense against Swiss and Liechtenstein banking secrecy laws that punish whistleblowers with fines or jail.

Comisky’s letter was first made public by Philippine Inquirer reporter Donna S. Cueto in May. But Cueto did not name Koller, whose name was never mentioned in the letter. Koller denied in an e-mail to In These Times that she was the secret witness. However, a staff member of the French National Assembly arranged a contact with an intermediary who named Koller as “Madame Z” (an identification also supported by several other sources). Comisky did not dispute that she was his client, but declined to discuss the case.

Peter Herzog of KPMG denies Koller’s claims, saying, “KPMG has never been involved in any action regarding the Marcos affairs.” Martin Somogyi, a spokesman for Credit Suisse, said in a written statement: “Credit Suisse cooperated fully and transparently with the Swiss authorities as regards this matter. In 1986, we supplied full details of the Marcos family accounts to the Swiss authorities, who then forwarded this information to the Philippine authorities. All of the Marcos family’s funds were frozen in 1986, and movements of funds prior to the freeze were also reversed and frozen. All of the blocked funds in Switzerland were transferred in 1997 to a blocked account in the Philippines.”

But claims that more accounts exist come from an unusual source. In 1998, Marcos’ loquacious widow Imelda gave an interview to The Associated Press and AFP in which she declared that, “There is more Marcos wealth that this government is not yet aware of, but for the time being I can admit that there is only $800 million in various international banks.”

While the Philippine Presidential Commission on Good Government (PCGG), has been struggling for years to track down the missing millions, in late June, Haydee Yorac, chairwoman of the PCGG, declined Koller’s proposition to pay her $225,000 plus 2 percent of the amount recovered. However, she indicated interest in talking with Koller and having her provide assistance, with reward based on the value of the help.

“The letter doesn’t really contain much by way of information,” explains Ruben Carranza, who’s in charge of litigation and research for the PCGG, adding that Comisky has not yet replied.

One might expect the Swiss government, now under increased pressure to combat its reputation as a protector of criminal money-laundering, to undertake a serious investigation. But Koller knows better. “In my experience the authorities have no interest in fighting any form of organized crime,” she told In These Times via e-mail. “Or at least that interest stops where competing financial interests begin.

Lucy Komisar is an investigative journalist who specializes in uncovering corporate misconduct. She deals frequently with offshore banks and corporate secrecy and their links to corporate crime; tax evasion by the rich and powerful; empowerment of dictators and oligarchs; bribery and corruption; pay-to-play politics; drug, arms and people trafficking; and terrorism. Her articles are archived at thekomisarscoop.com.