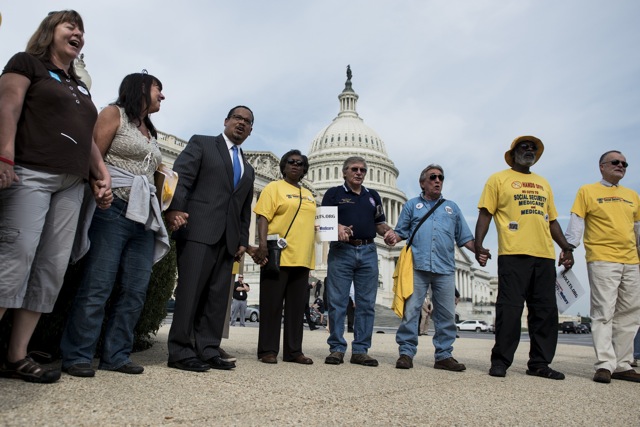 'It would be trying to substitute out the Obamacare cuts or delays, and substitute in some of these grand bargain approaches.'

As Republicans hold the government hostage and threaten to wreak economic havoc with the looming debt-ceiling showdown, some progressives on the Hill are worried that the strong-arm tactics will lead to an agreement on so-called “entitlement reform.” That’s Washington parlance for cuts to the nation’s most significant social programs: Social Security, Medicare and Medicaid.

Alex Lawson, executive director of Social Security Works, which advocates for an expansion of Social Security benefits, compares the feared negotiating tactic to “the Indiana Jones maneuver from Raiders of the Lost Ark when they try to substitute the idol for the bag of sand.”

“In this case,” he says, “it would be trying to substitute out the Obamacare cuts or delays, and substitute in some of these grand bargain approaches. These are ones that are non-controversial, that are seemingly agreed-upon. We think it’s really important to get out in front of any attempts to do that and show that no, these are highly controversial and there will not be support.”

On Thursday morning, about 20 Democratic members of Congress—almost all from the 72-member Congressional Progressive Caucus (CPC)—rallied outside the Capitol Building to oppose any such cuts.  Many focused in particular on the “chained consumer price index” or “chained CPI”—a proposal to adjust the formula used to calculate cost-of-living adjustments for Social Security benefits. The adoption of “chained CPI” would mean a reduction in future program payments—especially hitting those seniors who rely on their benefits as a significance source of income.

Since that proposal has received backing from both House Republicans and the White House, some progressive Congress members fear that the administration and the GOP could agree on chained CPI as part of a deal to reopen the government or avoid a default.

“Folks are scurrying around here trying to figure out how to end the shutdown,” Progressive Caucus Co-Chair Keith Ellison (D-Minn.) told the crowd. “Sometimes I’ve heard people say well you know maybe we should give them something. Imagine a gangster locking all of us in a room saying it’s gonna be curtains for you and any one of y’all who joins me can get out. This is called divide and conquer. Some folks say we’ll give you chained CPI.”

Social Security Works helped organize Thursday’s rally, along with the Progressive Caucus and the Alliance for Retired Americans, an AFL-CIO-affiliated senior advocacy group. After the representatives finished their speeches, they locked arms with dozens of supporters to form a “human chain against chained CPI.” The idea comes from the Alliance for Retired Americans, which organized similar “human chain” protests across the country this summer.

The rally demonstrated the political determination of the Progressive Caucus as it tries to stake out a firm anti-cuts position ahead of any potential votes to slash social insurance programs. In so doing, the CPC is sending a strong message to the White House and the Democratic leadership, which is mildly supportive of benefit cuts.

Speaker John Boehner has already expressed interest in crafting a long-sought “grand bargain” as part of negotiations over raising the debt ceiling. Thus far, President Obama has indicated his opposition to making any concessions in exchange for raising the debt ceiling. But with the president’s steadfast refusal to negotiate over the Affordable Care Act, progressives in Congress are concerned that he may eventually become willing to compromise on other budget issues to bring the shutdown to a close and avert a debt default.

Chained CPI appears the most likely concession, but another site of bipartisan agreement could be Medicare cuts, since the President’s most recent budget proposal contained about $400 billion in cuts to the program.

Charles Konigsberg, who served as assistant director of the White House budget office during the last government shutdown in 1995-1996, believes the political moment is ripe for slashing Social Security, Medicare and Medicaid.

“The last impasse over the debt ceiling produced the joint congressional committee on debt reduction and a large part of their work was looking at various entitlement reforms,” says Konigsberg, who directed the Bipartisan Debt Reduction Task Force in 2010 and supports the adoption of chained CPI.  “It’s entirely possible that once they do actually start negotiating, that one of the issues on the table will be long-term entitlement reform.”

In addition to the looming vote on raising the debt ceiling, Konigsberg points to how the government shutdown could also enable negotiations leading to cuts in major social programs.

“There’s no question that the last shutdown, ‘95 to ’96, set the stage for the budget negotiations that eventually led to the Balanced Budget Act of 97,” he says. That act included a roughly $400 billion cut to Medicare.

But even if the President refuses to negotiate a major deal in advance of the debt-ceiling vote, that doesn’t mean “entitlement reform” is off the table for good.

A senior Hill aide tells In These Times that Republicans might agree to pass a short-term continuing resolution—lasting no more than six weeks, for instance—and raise the debt ceiling in exchange for a promise from the White House and Democratic leadership to negotiate cuts to Social Security or Medicare at a later date.

In that case, the future of Social Security could come down to where the Democratic caucus chooses to draw a line in the sand. While Thursday’s event highlighted the left flank of the party’s opposition to cuts and the willingness of the Progressive Caucus to dig in its heels, other Democrats may be more inclined to accept cuts.

In These Times asked Rep. Alan Grayson (D-Fla.), who with Rep. Mark Takano (D-Calif.), authored a letter to the White House in April pledging to vote against any and all cuts to Social Security, Medicare and Medicaid, if he has faith in his party to hold the line.

“I have faith in the ones who signed the Grayson-Takano letter,” Grayson says of the 44 Democrats. “I have some more limited faith in those who signed the Schakowsky letter [slightly more than 100 Democrats expressing a broader, less strongly-worded opposition to benefit cuts]. On that, it’s very hard to say.”

For his part, Keith Ellison’s feelings on chained CPI are firm, “No way. No way.”