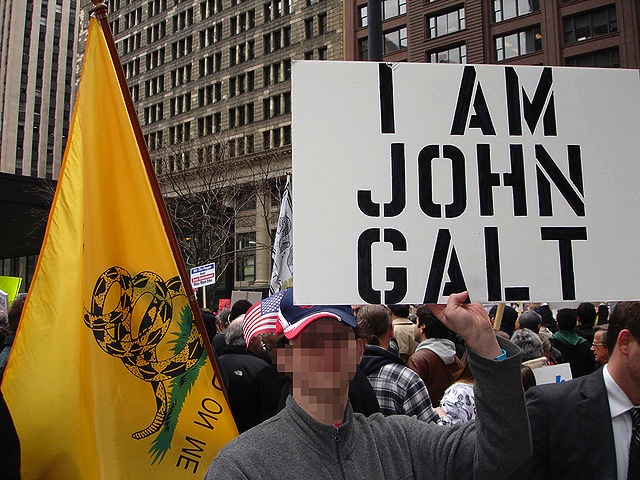 A Tea Partier protesting in Chicago in 2009. (Wikimedia)

Who Is John Galt? Now We Know!

On financial meltdowns and government shutdowns.

Quite a lot of things have to be regulated if we are to enjoy our non-regulated freedom. A Tea Party member cannot go to an anti-Obama protest if he is busy choosing his water company (the ONLY good argument for water supply deregulation I can think of!)

What is the ongoing U.S. government shutdown really about? In the middle of April 2009, I was taking a rest in a hotel room in Syracuse, N.Y. and jumping between two channels: a PBS documentary on Pete Seeger, the great American country singer of the Left, and a Fox News report on a country singer of the anti-tax “Tea Party,” who was performing a populist, anti-Obama song full of complaints about how Washington is taxing the hard-working ordinary people to finance the rich Wall Street financiers.

There was the weird similarity between the two singers. Formulating an anti-establishment populist complaint against both the exploitative rich and the government, they called for radical measures, including civil disobedience. It was another painful reminder that today’s radical-populist Right strangely reminds us of the old radical-populist Left. Are today’s Christian survivalist-fundamentalist groups, with their half-illegal status, seeing the main threat to their freedom in the oppressive state apparatus, not similar to the Black Panthers back in the 1960s?

The difference is the fundamental irrationality of the Tea Party agenda: to protect the interest of the hard-working ordinary people by way of privileging the “exploitative rich” and thus literally countering their own interests. One of the weird consequences of the 2008 financial meltdown and the measures taken to counteract it (enormous sums of money to help banks) was the revival in the work of Ayn Rand, the closest one can come to the ideologist of the “greed is good” radical capitalism. The sales of her magnum opus Atlas Shrugged exploded again. According to some reports, there are already signs that the scenario described in Atlas Shrugged—the creative capitalists themselves going on strike—is being enacted. The ridicule of this reaction is that it totally misreads the situation: Most of the gigantic sums of bail-out money went precisely to the Randian deregulated “titans” who failed in their “creative” schemes and thereby brought about the meltdown. It is not the great creative geniuses who are now helping lazy ordinary the people, the ordinary taxpayers, who are helping the failed “creative geniuses.” One should simply recall that the ideologico-political father of the long economic process that ended up in the 2008 meltdown was Alan Greenspan, a card-carrying Randian “objectivist.” Now we finally know who John Galt is—the idiot responsible for the 2008 financial meltdown and, consequentially, for the ongoing shutdown.

How long will this masterful ideological manipulation continue to work?

An opinion poll in the United States at the end of June 2012 showed that a strong majority, though they oppose Obamacare, strongly support most of its provisions. Here we encounter ideology at its purest: the majority wants to have its (ideological) cake and eat the (real) cake. They want the real profits of the healthcare reform, while rejecting its ideological form, which they perceive as the threat to the “freedom of choice.” They reject the concept of fruit, but they want apples, plums, strawberries…

Some of us remember the old infamous Communist tirades against the bourgeois “formal” freedom. Ridiculous as they were, there is a moment of truth in the distinction between “formal” and “actual” freedom. A manager in a company in crisis has the “freedom” to fire workers A or B, etc., but not the freedom to change the situation that imposes on him this choice. The moment we approach the healthcare debate in this way, the “freedom to choose” appears in a different way. True, a large part of the population will be effectively delivered of the dubious “freedom” to worry about who will cover their illness, to find a way in the intricate network of financial and other decisions. Being able to take basic healthcare for granted—to count on it like one counts on the water supply or electricity, without worrying about choosing one’s water or electric company—they will simply gain more time and energy to dedicate their lives to other things. The lesson to be learned is thus that the freedom of choice is something that actually functions only if a complex network of legal, educational, ethical, economic and other conditions exists as the invisible thick background of the exercise of our freedom.

This is why, as a counter-poison to the ideology of choice, countries like Norway should be held as a model: Although all main agents respect a basic social agreement and large social projects are enacted in solidarity, social productivity and dynamics are at an extraordinary level, flatly denying the common wisdom that such a society should be stagnating.

Not many people know—and even a lesser number of them appreciates the irony of the fact—that Frank Sinatra’s iconic song “I’ll do it my way,” supposed to render the American individualist attitude, is the Americanized version of the French song “Comme d’habitude,” which means “as usual, as it is customary.” It is all too easy to see this pair of songs as yet another example of the opposition between sterile French manners and American inventiveness (the French follow established customs, while Americans look for new solutions)—but what if we drop the false appearance of opposition and discern in the habit the hidden sad truth of the much-praised search for new ways? In order to be able to do it my way, each of us has to rely on quite a lot of things going on comme d’habitude. Quite a lot of things have to be regulated if we are to enjoy our non-regulated freedom. A Tea Party member cannot go to an anti-Obama protest if he is busy choosing his water company (the ONLY good argument for water supply deregulation I can think of!)

So we are confronting here a tough choice. One often hears that the shutdown is the result of narrow partisan bickering, that politicians should learn to rise above it and find broad bi-partrisan solutions for the good of the nation. Not only the Tea Party people, but also President Obama is accused of dividing the American people instead of bringing them all together—but what if this, precisely, is what is good about him? In situations of deep crisis, an authentic division is urgently needed—a division between those who want to drag on within the old parameters and those who are aware that change is necessary. Such a division, not opportunistic compromises, is the only path to eventual true unity.