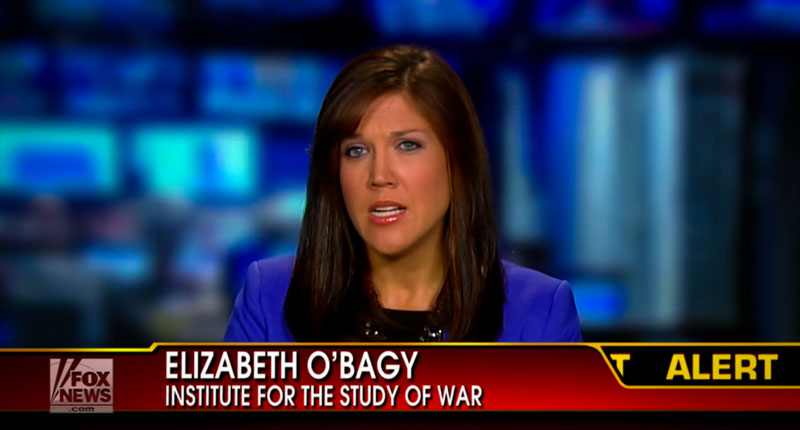 How the Beltway media embraced a fake Syria expert.

Washington fraudulence is stoked by a demand for expertise that reshapes itself briskly in the service of certain blunt policy directives. Elizabeth O’Bagy was an expert because the D.C. pundit ecosystem needed her to be one.

Amid the backward reeling of Washington's bid to launch yet another Middle Eastern invasion, there was one unexpected collateral casualty: the fanciful résumé of Elizabeth O’Bagy. By appearances, O’Bagy had all but been sent over from central casting to tout a war with Syria. And indeed, this proved to be the case. A protégée of neocon warmonger Kimberly Kagan, who directs the D.C.-based Institute for the Study of War (ISW), O’Bagy was hired as a senior policy analyst there in 2012 at the tender age of 25. Within the year she was bearing a comforting gospel truth to Washington’s crusading class: The resistance in Syria was really made up of pro-democracy reformers, not hardline Muslim militants.

But O’Bagy had trespassed against D.C. power in an unforgivable way: She’d lied about her credentials—claiming to hold a Ph.D. from a Georgetown government program that she’d never enrolled in. So, in September, Kagan announced her dismissal.

Still, the story in Washington is never really about what credentials people claim; rather, it’s what gets done with the baubles of legitimacy one puts before the great policy and punditry bazaar. Washington fraudulence is stoked by a demand for expertise that reshapes itself briskly in the service of certain blunt policy directives. Elizabeth O’Bagy was an expert because the D.C. pundit ecosystem needed her to be one.

Consider in this regard the jaw-droppingly flagrant record of the ISW itself. Both Kagan and her bellicose think tank rose to prominence amid the dismal 2009 debate over committing more troops to the American occupation in Afghanistan. She and her husband, Fred Kagan—a resident scholar at the American Enterprise Insitute—inserted themselves into the surge debate and procured a tour of Afghan central command headquarters at the behest of its then-leader, Gen. Stanley McChrystal, by the effective D.C. expedient of threatening to broadcast the weaknesses of the strategy across the nation’s op-ed pages. Knowing a shakedown when he saw one, McChrystal granted the couple a fortnight’s stay—at which point, they graciously reciprocated with a Wall Street Journal op-ed announcing that, what do you know, the surge was going just fine after all.

No such hardball tactics were required, however, when David Petraeus—an old crony of the Kagans—took over the Afghan command from McChrystal in 2010. The neocon power couple swept in and set up shop in Petraeus’ Kabul power sanctum for more than a year, forgoing stateside job duties (if not their think-tank salaries) for frontrow seats at the surge. Like all such baldly transactional D.C. based relationships, the Kagan-Petraeus alliance was drowning in baksheesh: The think tankers were granted access to the highest-level decisions made in the Afghan battlefronts—knowledge that was of special interest to the funders of the ISW, who include defense contractors such as General Dynamics, Dyncorp International and CACI International. Petraeus, meanwhile, got a pair of live-in war-boosters who could be reliably counted on to take to the nation’s op-ed pages with yet more breathless propaganda when they returned stateside.

Likewise, when Petraeus returned stateside to run the CIA, no one blanched at the thought of him stopping by to claim an award at a fundraiser made up of five-figure donors to the ISW. “What the Kagans do is they grade my work on a daily basis,” Petraeus announced to the chortling gala crowd. “There’s some suspicion that there’s a hand up my back, and it makes my lips talk, and it’s operated by one of the Doctors Kagan.”

The Kagans, unlike Kim’s ISW protégée, are indeed doctors. But here’s the thing: Their Ph.D.s have nothing to do with modern military strategy; Fred wrote his on 19th-century Russian military policy, and Kim was certified as a scholar of ancient Greek and Roman military history. Nonetheless, Petraeus neatly summed up the real utility of these humanities hawks: The ISW, he said, “is now a deployable organization. We’re going to start issuing them combat stripes.”

Note to Elizabeth O’Bagy: That’s how you nail down a D.C. credential. Though there appears to be hope for our young striver yet: She’s recently been hired on to the staff of invasion-happy GOP Sen. John McCain.