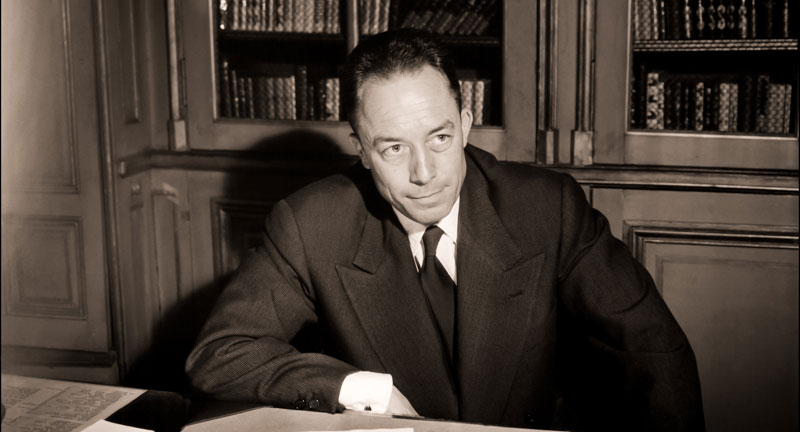 Albert Camus, rebel on the mount.

The Rebel and the Arab Spring.

'Our duty is to quarantine violence, recalling what it does to both those who use it and those against whom it is used.'

“Revolt,” declared Albert Camus in 1951 in The Rebel, “protests, it demands, it insists that the outrage be brought to an end, and that what has up to now been built upon shifting sands should henceforth be founded on rock.”

The revolt he had in mind was the French wartime resistance, when thousands of men and women from different walks of life joined forces in response to the outrage of German occupation. Camus traced the moment when the individual, pushed too far, pushes back—and suddenly discovers others are pushing with her. He summarized this tension in Cartesian terms: “I resist, therefore we are.”

Sixty years later, the Arab Spring sprang from this same resistant impulse. For young Egyptians, Tunisians and Libyans suffocating under the rule of brutal authoritarians, the breaking point arrived in 2011, driving thousands of people to try, as Camus put it, to “bring the outrage to an end.” Camus describes rebellion invariably moving from individual to collective response—a phenomenon that “transcends the individual in so far as it withdraws him from his supposed solitude and provides him with a reason to act.” Facebook and Twitter, crucial to the success of the Arab Spring, were, in this light, technological means to the oldest of human ends.

As the centenary of Camus’ birth approaches on November 7, his observations on rebellion, formed in the crucible of world war, Cold War and civil war, retain all their urgency for current events in North Africa.

In 1954, when France and the Algerian- nationalist FLN collided in a war of stunning brutality and barbarism, the 41-year-old French-Algerian writer slammed France for its use of torture and reprisals against civilians. But unlike his fellow intellectuals, he also slammed the FLN for its use of terrorism. “We must refuse,” he wrote, “to justify these methods on any grounds whatsoever, including effectiveness. Once one begins to justify them, even indirectly, no rules or values remain.”

Camus laid the ethical foundation for this position on Algeria in The Rebel, which was published to great controversy. He portrayed the Mediterranean world—one encompassing not just Greece but also North Africa—as the cradle of moderation. Sophrosyne, the Greek ideal of self restraint, girds Camus’ definition of rebellion. Just as self-restraint implies a constant tension between two opposing forces—a straining in two directions at the center of which is the space for creation and progress—the act of rebellion thrives on a similar stress.

Yes, the rebel resists the effort of others to deny his dignity and liberty. Equally critical, however, the rebel seeks to impose a limit on her own self. Rebellion resembles a kind of engaged equipoise, an active watchfulness in regard to the humanity of others as well as oneself. The rebel does not deny his master as a fellow human being; he denies him only as his master. “It is for the sake of everyone in the world that the slave asserts himself when he comes to the conclusion that a command has infringed on something in him which does not belong to him alone.”

In a word, Camus offered an ethic of limits. He understood that at those moments that history lashes out at a people, violence is unavoidable; what he also knew was that we must never mistake its ineluctability for legitimacy. Our duty is to quarantine violence, recalling what it does to both those who use it and those against whom it is used.

Tony Judt rightly described Camus as our age’s “spokesman for the obvious.” Of course, in the 1950s few people on the Left thought Camus’ words were obvious—with the noble exceptions of thinkers like Léon Blum, Raymond Aron and Simone Weil, the French Left believed in the “singing tomorrows” promised by Communism. Too many liberals today, when it comes to their acquiescence of the Egyptian military’s crackdown on the Muslim Brotherhood, also fail to see the cogency of Camus’ “obvious” warnings.

Tellingly, Arab voices have begun to echo the man who was once seen as an apologist for French colonialism. The Moroccan magazine Zamane recently identified Camus as the “moralist missing in this new century of fear,” while the Tunisian intellectual Akram Belkaid, discussing the self-immolation of Mohamed Bouazizi—the foundational act of Arab Spring—exclaimed: “Yesterday it was Camus, today it is Bouazizi: He is no longer part of our world, but he is not silent. His cry is primal: he demands the right to dignity.” And though Algeria remains quiet, its writers increasingly turn to Camus. Assia Djebar, for one, has placed Camus in the pantheon of Algeria’s—not French Algeria’s—political martyrs. The Algerian writer Hamid Grine published a novel titled Camus dans le narguilé (Camus in the Hookah), in which the narrator discovers that his biological father was none other than the author of The Stranger. This leads to his odyssey for both his real father and the literary legacy lost to Algeria.

As Judt noted, Camus did not fight for a utopia where people do not kill one another, but instead “a world in which murder is not legitimized.” His modest goal, as a result, was to “save bodies”— bodies enough “to keep open the possibility of a future.” While this might not offer a complete map for America’s attempt to navigate a roiling Middle East, it certainly reminds us of the moral scale we must apply in our policies.

Robert Zaretsky is a Professor of History at the University of Houston in the field of modern European intellectual and cultural history. He is the author of A Life Worth Living: Albert Camus and the Quest for Meaning and Boswell’s Enlightenment, and is at work on a book on the friendship between Catherine the Great and Denis Diderot. He is a frequent contributor to the New York Times, Foreign Policy, Los Angeles Times, International Herald Tribune, Le Monde Diplomatique, Chronicle of Higher Education, and the London Times Higher Education Magazine. He is the history editor for the Los Angeles Review of Books and a monthly columnist for the Jewish Daily Forward.