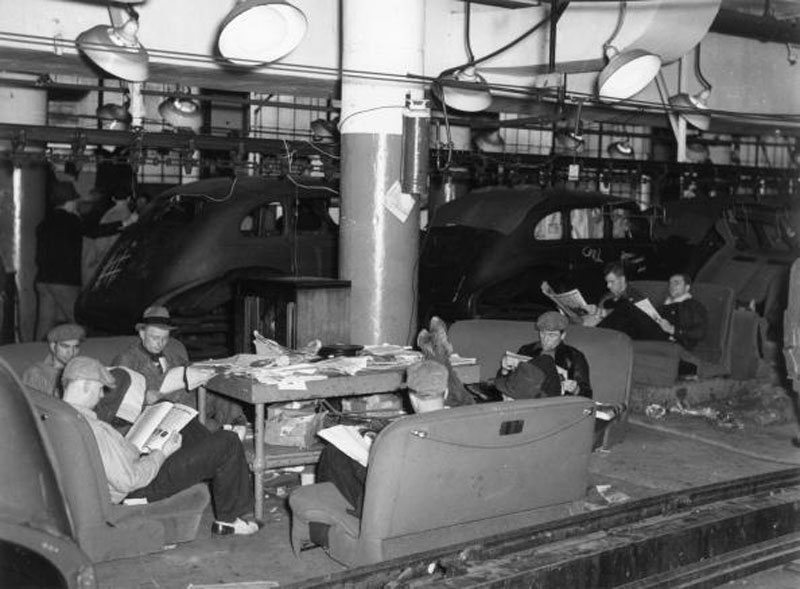 The General Motors workers of the 1930s knew that shutting down the plant through sit-down strikes was powerful leverage against the bosses. (Photo by Sheldon Dick/Getty Images)

A Different Kind of Shutdown

What if progressives took a page from the Tea Party?

Workers never got anything by asking nicely. They got it by striking, picketing, and yes, occasionally dynamiting their employers.

During the height of this fall’s government shutdown, Obama spoke to factory workers about Republican intransigence in Congress. He asked them: If they wanted a raise and more vacation time, would they just shut down the plant and walk off the job?

Telling the story to reporters, the president recalled, “I said, ‘How do you think that would go?’ They all thought they’d be fired. And I think most of us think that. You know, there’s nothing wrong with asking for a raise or asking for more time off. But you can’t burn down the plant or your office if you don’t get your way. Well, the same thing is true here. … The American people do not get to demand a ransom for doing their jobs.”

The thing is: They once did exactly that. Workers never got anything by asking nicely. They got it by striking, picketing, and yes, occasionally dynamiting their employers. But in an era of declining industrial action, when few are inculcated in the traditions of union solidarity and the strike, those memories have faded. Obama wants to see them completely forgotten.

During the height of New Deal-era militancy, nearly all of General Motors’ 150,000 production workers were involved in a workplace shutdown or factory occupation. “Every time a dispute came up,” one UAW member remembered, “the fellows would have a tendency to sit down and just stop working.”

This wasn’t the same kind of inchoate indignation that fuels the Tea Party politicians whom Obama was rebuking—it was a response from the victims of wage cuts, unemployment, police batons and poverty. Both upsurges, however, are testament to what force and organization can accomplish.

The term “class struggle” may sound arcane to 21st century ears, but that struggle is at play everywhere in society. Take the typical workplace dispute, such as the recent rash of fast-food worker protests: At root is the contradiction between the interest of the employer to make the workday longer, wages lower and the pace of work quicker and the interest of workers to shorten the workday, increase wages and slow down the pace of work. This conflict has become increasingly one-sided, with so-called “right-to-work” laws and the rise of precarious labor all benefiting owners and hurting workers.

What would it take to even up the odds?

“After Bachmann, our turn,” may be a poor motto for a resurgent progressive movement, but in the frenzied activity of the Tea Party, in their zeal and opposition, we may see the future of American politics—a future in which committed factions can appeal for public attention and build an opposition movement.

Out of 435 representatives in the House, the Tea Party Caucus has just 46 members. Out of 100 senators, only six. But the success of those politicians in making their anti-government platform heard and “holding the country ransom,” as the president put it, shows the opportunities that the peculiarities of Congress can offer to disciplined minorities. The ineffectual Congressional Progressive Caucus has almost twice the declared members of the Tea Party Caucus, but is less militant, less cohesive and lacks the sustained pressure from outside social movements. There is no reason why a different sort of formation couldn’t shake things up from the Left.

True, most Americans said they disapprove of the shutdown, and the Tea Party’s approval ratings have tanked. But that could be because Americans feel the Tea Party’s unpopular policy goals failed to justify their brazen tactics. A stubborn stance in defense of Social Security or against war may summon a different response.

And things could be worse for the Tea Party. Despite having the support of no more than a particularly white and graying quarter of the country and being regionally ghettoized, it looks set to gain budgetary concessions and retain a powerful position in the Republican Party, enough to have a long-term influence.

A progressive insurgency may not necessarily want to shut down government in the same manner as the Tea Party, but it would benefit from the ability to do so—without neglecting the need to build pressure on the streets and electoral alternatives outside the Democratic Party.

Even Tea Party-like success—the ear of a large minority of American voters and a pull on the broader discourse—would be a tremendous advance for those looking not just to protect, but to expand the welfare state. Short-term defeats, like the one Republicans just suffered, could pave the way to long-term victories. The history of American conservatism, from Barry Goldwater’s trouncing in the 1964 elections and beyond, provides plenty of examples.

Our presidential system of government, lacking the clear mandates and order of parliamentary ones, will be unstable for decades, but it’s defeatist to say that the decline of liberalism and the polarization of opinion will necessarily benefit conservatives. Washington elites’ fear of conflict and disorder was triggered just as strongly by the Occupy Wall Street movement as by the Tea Party rallies.

Both were groundswells that those busy constructing their own narratives to benefit the status quo will want to counter. Perhaps the best response to Obama’s whitewashing of passion and conflict from history comes from something that A. Philip Randolph was fond of reminding his audiences, “At the banquet table of nature there are no reserved seats. You get what you can take, and you keep what you can hold. If you can’t take anything, you won’t get anything; and if you can’t hold anything, you won’t keep anything. And you can’t take anything without organization.”

That’s something Ted Cruz and I can agree on.