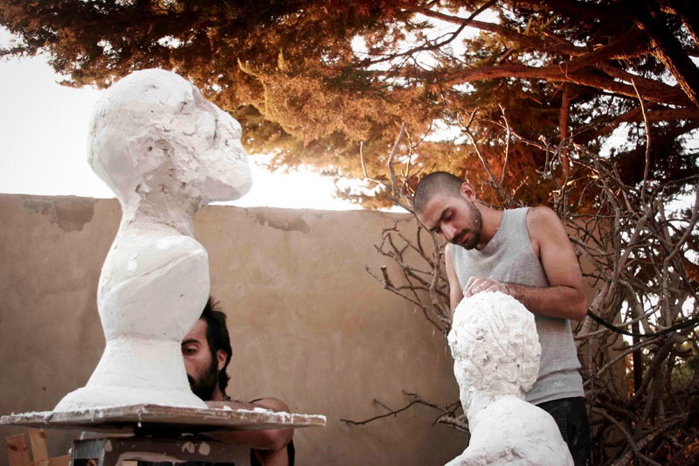 Syrian Artists Pick Up the Pieces

The artists in residency are given full room and board, along with paints, brushes and materials. The only requirement is that they leave a piece of their work behind in order to help build up what is effectively becoming one of the first large collections of Syrian refugee art.

In the newly refurbished Art Residence Aley outside Beirut, Lebanon, artists fleeing Syria’s civil war find a welcoming space. At one end of the large stone house lies a common room, with couches surrounding a fireplace; at the other end is an open-plan kitchen. The space between is filled with canvases, paintbrushes and other materials for the artists to work with. Outside, a large garden is dotted with statues left behind by previous artists. The artists in residency are given full room and board, along with paints, brushes and materials. The only requirement is that they leave a piece of their work behind in order to help build up what is effectively becoming one of the first large collections of Syrian refugee art.

In 2008, Raghad Mardini, a civil engineer, left her home in Damascus for Beirut. There, in 2011, she developed a friendship with a local calligrapher named Ziad Talhouk who owned an Ottoman-era building in Aley, a small town perched on Mount Lebanon just 17 kilometers southeast of the city. The building was in disrepair, its walls crumbling and its garden suffering from years of neglect. In Damascus, Mardini had worked as a restorer of historic buildings. It wasn’t long before the two reached a deal: Mardini would restore Talhouk’s property in exchange for being able to use the space as she pleased.

What Mardini wanted was to create a space to host fellow artists fleeing the civil war in Syria. “I was very close to a great number of artists in Damascus,” she says. “Hosting young artists in a residency is for me a way to give hope and freedom to young Syrians who are exhausted in their psychological and living conditions.”

The restoration work took almost a year, and Art Residence Aley, or ARA, officially opened its doors in mid-2012. The residence has since hosted more than 20 artists from different regions of Syria, with diverse religious backgrounds and class origins. Wissam Muases, a 34-year-old sculptor from the west-central region of Nebek, was the first to take up Raghad’s invitation and move to Aley from Istanbul, where he had previously fled to escape the conflict. He was followed by Adel Dauood, 33, who stayed for almost a month to work on his paintings, and Anas Homsi, 26, who prepared at ARA what later became the first solo exhibition of his paintings at the Art Circle gallery in Beirut.

In the beginning, there was no application process to speak of: Artists showed up after hearing about ARA through word-of-mouth or communicating with Mardini via ARA’s Facebook page. But in recent months, Mardini has adopted a more structured process; artists now apply for residency by sending a C.V. and a portfolio for Mardini to review.

Producing art in a time of war isn’t easy. In Damascus, Habbab lived next to a prison. He recalls that he often heard screams and shouts coming from that direction. “Concentrating in such a situation was impossible,” says Habbab.

“When you live in times of war,” Mardini says, “you are the witness of events that you never thought you would see. You consequently start thinking about issues and facets of life you never thought about before and you never even dreamed you might think of. It’s the most intense experience one could ever have.”

But even in a safer country like Lebanon, things are still difficult “When you are a refugee,” Habbab says, “you don’t have your own house. You sleep on friends’ couches. And as everything in your life suddenly becomes transitory, it’s hard to step back and create art—something that by nature aspires to be permanent.”

It’s no surprise that many of the works created at ARA reference the ongoing war. Some are explicit, like Aley resident Fadi al-Hamwi’s painting of a Kalashnikov, a common weapon in Syria, pointed in the direction of a bare skull. Others are more subtle; Habbab’s paintings, for example, resemble the impressionist explosion of a bomb. Every color on the canvas, he says, is meant to represent the loss of an idea or a dream.

Ultimately, Mardini wants ARA to be more than just a working space and a shelter. She feels the residency should be a way for the artists she hosts to make a name for themselves and integrate into the Beirut art community, and from there, into the international art world. The Syrian art scene has always been a thriving one, but under the Assad regime, says Mardini, it was not allowed much freedom beyond a small and confined circle of the urban elite. According to Mardini, many Syrian artists never left the country and had little to no contact with the external world.

“The rest of the world has, for the first time, the [opportunity] to see how Syrian talent works,” says Mardini, “and to perceive Syria as something more than just a country of radicals and extremists.”

Her efforts are bearing fruit. At the beginning of October, Mardini helped to stage a fair of Syrian art at Artheum, a space in Bourj Hammoud, an Armenian neighborhood on the north side of Beirut. For a week, almost 40 Syrian artists—including seven who had been residents of ARA—were brought together under one roof to show their work.

Meanwhile, in Gemmayze, a neighborhood right next to downtown Beirut, a gallery called Art on 56th has made the promotion and international recognition of Syrian art a priority. And even outside of Lebanon, the art world is taking notice of the new wave of ex-pat Syrian artists. Institutions in Morocco, Jordan, Spain, Germany and Canada have all contacted Mardini to express interest in hosting events showcasing Syrian art. “Nothing yet is certain,” Mardini says, “except that people are more and more interested in what is coming from Syria.”

But for the artists living and working at ARA, the residence provides more than the opportunity for professional recognition; it offers a safe space to recuperate from the psychological trauma of war. “ARA is like a hospital,” says Muases. “You come in with wounds, you rest for a while, think and work in order to recover. And when you feel ready to confront the real world again, you step outside and try to better it.”