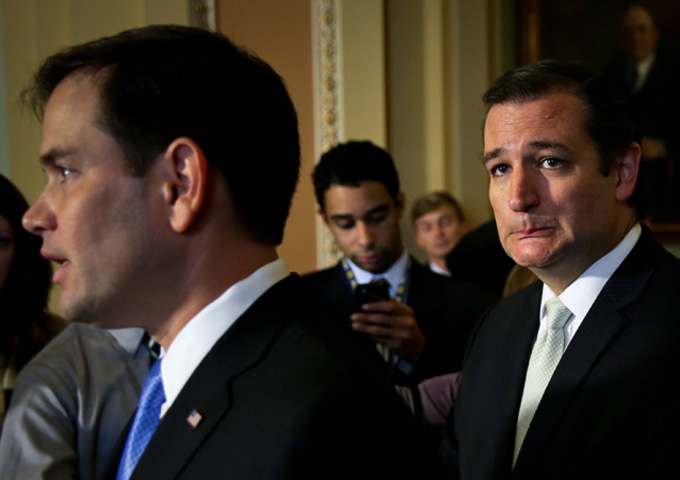 How Cuba’s Bitter Sons Shut Down the U.S. Government

In Marco Rubio and Ted Cruz, the Tea Party found the perfect pawns.

It’s the open wound of Fidel Castro’s revolution being poked at by Jim DeMint, that makes Marco Rubio and Ted Cruz do what they do.

Left out of all the thousands of words written about the GOP's government shutdown, about the party's nihilistic willingness to crash the world economy, about Republicans' laser focus on obliterating the Affordable Care Act (ACA), was the fact that two of the poster boys for this suicide mission were the sons of Cuban exiles whose fears about socialism were willingly and willfully exploited by the radial Right.

Make no mistake: It's the open wound of Fidel Castro's revolution being poked at by Jim DeMint, the former South Carolina senator and mastermind behind the shutdown, that makes Marco Rubio and Ted Cruz do what they do.

Since taking over the Heritage Foundation, DeMint—who keeps a puppeteer's hand in a big GOP political action committee, the Senate Conservatives Fund—has turned Heritage into a dagger aimed at the heart of anyone who questions his radical Right crusade. Deny DeMint's bidding and you don't just get defunded: Suddenly, there's right-flank competition and attack ads before the campaigns even begin.

In Rubio and Cruz, junior senators from Florida and Texas, repsectively, DeMint found the perfect pawns for his attack on Obamacare. The inheritance of an exilic sense of loss and betrayal gives both Cruz and Rubio a fierce, reflexive response to anything that even vaguely smells of Communism. Long before the ACA fight, Rubio rallied against travel to Cuba by claiming such trips are an “indoctrination of Americans by Castro government officials.” And Cruz, whose father is a former Castro supporter, has spoken of the need to preserve the United States as a bastion of freedom against enroaching socialism.

DeMint himself is more Cold Warrior than Southern racist or Christian radical (both labels have been used to describe him). His 2009 book, Saving Freedom: We Can Stop America's Slide into Socialism, is a long red-baiting screed. As early as 2007, DeMint was equating government-subsidized health care, even for children, with socialized medicine. Rubio picked up the tune as soon as he got Tea Party support for his Senate campaign, and Cruz ran for office on an anti-ACA, red-baiting platform.

As a bonus for DeMint, both Cruz and Rubio are technically Hispanic enough to blunt racist charges against the GOP, but not so Hispanically aligned as to be perceived as completely untrustworthy by the far Right, which has a long racist history. During the shutdown, as Cruz was elevated to Tea Party darling, his Hispanic identity was conspicuously absent from media accounts, likely drowned out by DeMint's loud public support. Look long and hard, and the closest  to an acknowledgement of Cruz's roots came from the detractors on both left and right who chose to use his birth name—Rafael, rather than his adopted “Ted”—when mocking him, or pointed out the similarity of his scorched-earth style with that of Castro.

While Cruz seems comfortable being Hispanic-when-convenient, Rubio is more invested in defending himself as an authentic Latino. Last year, when Latino protesters angry over his hard-line immigration stance started up the harangue “No Somos Rubios” —which means “we are not blond,” playing off the senator's Spanish surname—Rubio responded by saying, “neither am I”—suggesting he didn't identify as white: big news to most Latinos. In search of his Latino identity, at one point last year Rubio even strayed from the Tea Party line and realized the wisdom of a path to citizenship for longtime undocumented U.S. workers. Soon after, though, DeMint—whom Rubio had said was his best friend in Congress—publicly denounced Rubio's immigration efforts. “I think [immigration] hurt [him] some … but he's getting his footing back in helping us stop Obamacare,” said DeMint.

In other words, since Rubio won his Senate seat thanks to the Tea Party and can't dream of running for anything without DeMint's support, he spent the lead-up to the shutdown as DeMint's opening act on the anti-Obamacare town meetings tour, essentially publicly apologizing for his apostasy on immigration reform. Also on that bill: Sen. Cruz's dad, Rafael Sr., a former Castro supporter who has no shame in comparing President Barack Obama to Castro.

And in the wings: DeMint smiling benevolently at his star Latinos.