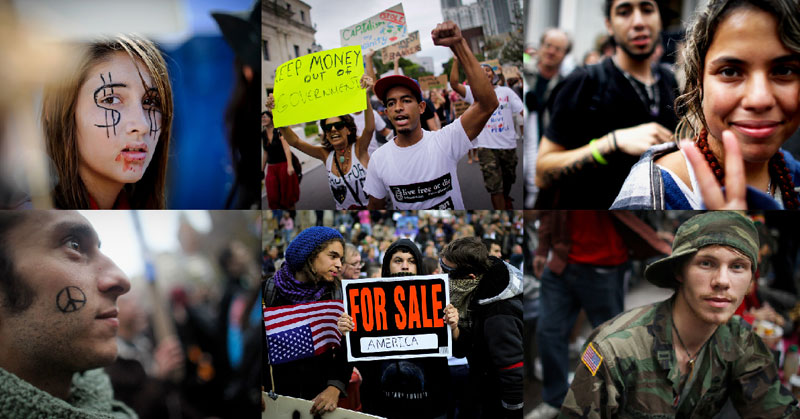 Occupy has left some Millennials questioning their place in social movements.

We just woke up in this world, and we’ve been robbed of all normalcies, and we’ve had a vague itching sense for a decade of our lives that this isn’t the way the world is supposed to work. That we have the ability to do better.

In October 2011, Matthew Richards was arrested in Veteran’s Memorial Park in his hometown of Manchester, N.H., after he and several other Occupy activists refused to leave the park when it closed. At his March 2012 trial, he explained that he “felt morally obligated to stay in the park” and that “miracles can happen when people … make a decision to take their power back through acts of refusal.” A jury found him guilty of criminal trespass. He was sentenced to 90 hours of community service.

“I was so excited to be heard by a jury, because I felt that if I was heard by people from my city, they would understand that this was the silencing of dissent and the curbing of free speech,” Richards says. “When they returned the verdict, my heart just sank. I was lost.”

Occupy was the source of both intense hope and despair for Richards. In the following essay, adapted from a piece that originally appeared on his Facebook page, Richards grapples with what the movement meant and whether Occupy’s unfulfilled promises are a lost cause or the seeds of the different world whose promise he glimpsed two years ago.

To foster a robust dialogue about the future direction of the movement, we asked a number of politically savvy people, young and older, to respond to Richards’ essay, to explore the role of social movements in creating political change and to tell us why we have reason to be hopeful—or not. —The Editors

In September 2011, some 1,000 protesters, answering the call of Adbusters magazine, converged upon Wall Street to confront the most powerful economic forces in the world. The symbolism of this action was clear: If Wall Street will not give us a fair democracy through the political system, we will create it ourselves.

I joined the encampment in Manchester, N.H., and threw myself into Occupy, believing that we could bring Wall Street to its knees, refusing to give in until we had won. The “General Assembly” became the first democracy I’ve ever felt I belonged to or had any voice in. I saw that it was possible for a small group of ordinary but extraordinarily committed people, through self-government, to fill the vacuums of need in my community that had been created by corporate capitalism and the greed of humans. And I was arrested for the first time standing up for what my conscience told me was right. I aged more in those five days of the occupation than I had in the previous 19 years.

I’m now struggling to understand the meaning of actions that made sense at the time. At some indiscernible point, the triumphs of Occupy transformed into the dying gasps of a movement on its way to popular irrelevancy.

Occupy was doomed to fail from the start because it faced challenges no other U.S. social movement has had to face. Occupy was created in the midst of a Category 10 shitstorm that involved a hostile American social climate, decades upon decades of brainwashing, a media black-out, an unrelenting foe and an unprecedented amount of police repression.

On September 15, economist Robert Reich argued on his Facebook fan page that movements such as the Civil Rights Movement, the labor movement and the anti- Vietnam War movement were able to sustain themselves for decades because they were politically organized, disciplined and had strategy—something, he said, the Occupy movement was not.

I disagree. These movements had features that, through no fault of its own, Occupy lacked. The most important of these are the lack of a common culture and the lack of a stable physical space.

The Civil Rights Movement didn’t spring out of nowhere in the middle of the night. It had a strong uniting culture, from commonly shared experiences of African diaspora and slavery to the Black music and Black literature of the Harlem Renaissance. Civil-rights leaders may have had strong disagreements about tactics, but they had a common struggle in their mutual oppression by white people. More importantly, they had a physical and moral base to build a movement from: the Black churches of the South. Over decades of organizing and bravery they grew into a movement powerful enough to take on the Jim Crow laws and racist institutions throughout the country.

Likewise, the New Left and the anti- Vietnam War movement of the ’60s had a common culture. The Boomer generation was raised in an era of McCarthyist paranoia and nurtured on rock ‘n’ roll. They had a need to rebel against the warlike tendencies and the mindless consumerism of their parents’ generation. Largely affluent, middle-class kids went to college in the largest proportions ever, sparking a revolution of radical student organizations on the campuses. Organizations like the Students for a Democratic Society, the Free Speech Movement, and a slew of anti- war groups naturally sprung up and sustained themselves in this period.

The Occupy generation was taught from a young age that strangers are to be feared. We were told not to associate with our neighbors. We were made to believe there is a child molester behind every corner and a razor blade in every piece of Halloween candy. We make superficial friendships on social media that make us feel more isolated than ever. Under these conditions, it is incredibly hard for any social movement based on mutual trust, understanding and shared experiences to flourish.

In addition to this, city councils across the country curtailed access to public space. The Occupy movement then became about reclaiming a place to meet.

But the Occupy movement didn’t stand a chance to build a mass movement when the police kept evicting us, and most of the General Assemblies were about how to protect ourselves from police violence. There was too much intimidation, and we didn’t have the time or the influence or the physical space to ever make it sustainable. When the parks were cleared, people resorted to social media, because it’s the only place where my generation knows to go.

Then Occupy came along. It struck a chord with so many in my generation, and they rushed at the chance to participate in something great. We came to it with nothing but the hope that we could. That maybe if the government can’t or won’t do anything, we have the ability to change the world on our own initiative.

My generation is the screwed generation. The exploited generation. The hopeless generation. We are not hopeless because we had no hope going into our struggle, but because we dared to hope we could change the world, even though we had no chance. We tried our hardest to take down Wall Street, but we weren’t able to shut down the Stock Exchange for a single day, and inequality today is even greater than when we started.

None of the options the Occupy movement has going forward are good ones. There aren’t enough people supporting the cause to work outside the system and foment revolution against Wall Street, though certainly people will try. The options inside the system are no better. Many good, passionate friends of mine are building socialist parties and green parties on a local level. I don’t think that will work either. I don’t think there is any opening for them within the two-party system.

In my trial testimony at Hillsborough County Superior Court North in March, I said that Occupy is about standing up for what is right even when the injustices are higher than the clouds and you can’t even afford a stepladder. I still strongly believe that, and it’s what I admire most about this generation.

Now that I’ve already done my best to fix the world and it didn’t work, I am at peace with the fact that it is no longer my job and won’t be again. I have settled for acts of solitary resistance and disinvolvement, at every possible turn. It’s my religion now.

Occupy as a whole was activism boot camp. I don’t know what the next great social movement will be, but it will owe its start to Occupy.

We may be beaten and demoralized now, but something’s gotta give, and I plan to live long enough to see meaningful change in my lifetime. I have to believe that. And, beyond all, have to hope. That’s what my generation does best.

Read responses to this essay from:

Neal Meyer, 24, the national youth organizer at Democratic Socialists of America. His senior thesis was titled “Left-wing Organizers and the CIO–1920-1937.”

Asha Ransby-Sporn, 19, a sophomore at Columbia University who works with Students Against Mass Incarnation and is a former In These Times intern.

Nick Espinosa, who helped launch Occupy Minneapolis and started the “glitterbomb” trend by dumping glitter on Newt Gingrich at a book signing in Minneapolis.

Andrew Bashi, 26, a Chicago defense lawyer, a former In These Times intern and an Iraqi-American, has been honored for his activism by the Bill of Rights Defense Campaign.

Rebecca Burns, 26, a former In These Times intern and organizer with Chicago's Communities United Against Foreclosure and Eviction, is an In These Times staff editor.

Michael Collins, 25, the vice president of the In These Times board, is a social worker who provides job-readiness training in the North Lawndale neighborhood of Chicago.

Susan Levine, 65, a former president of In These Times board, is the professor of history and director of the Institute for the Humanities at the University of Illinois Chicago.

Carl Davidson, 70, the co-chair for Committees of Correspondence for Democracy and Socialism and the manager of the Online University of the Left, lives in Beaver County, PA.

Cole Stangler, an In These Times staff writer based in northeast D.C., covering Congress, corruption and politics in Washington.

Sarah Jaffe, a staff writer at In These Times and the co-host of Dissent Magazine’s Belabored podcast. Her writings focus on labor, social movements, gender, media and student debt.

Marilyn Katz, the founder and president of Chicago-based MK Communications. She has been an anti-war and civil rights organizer since the Vietnam War.

Biola Jeje, a recent graduate of CUNY-Brooklyn College with a degree in political science. She spent her undergraduate years organizing students around austerity measures at the university level, interning for state legislators, congress, and local elected officials.

Linda Stout, founder and executive director of Spirit in Action, and a grassroots organizer and activist for over three decades. She is the author of Bridging the Class Divide: and Other Lessons for Grassroots Organizing and Collective Visioning: How Groups Can Work Together for a Just and Sustainable Future.

Matthew Richards, 22, studies history at the University of New Hampshire-Manchester and is working on Revolution is a Ruthless Boxcar, a book of poems about Occupy.