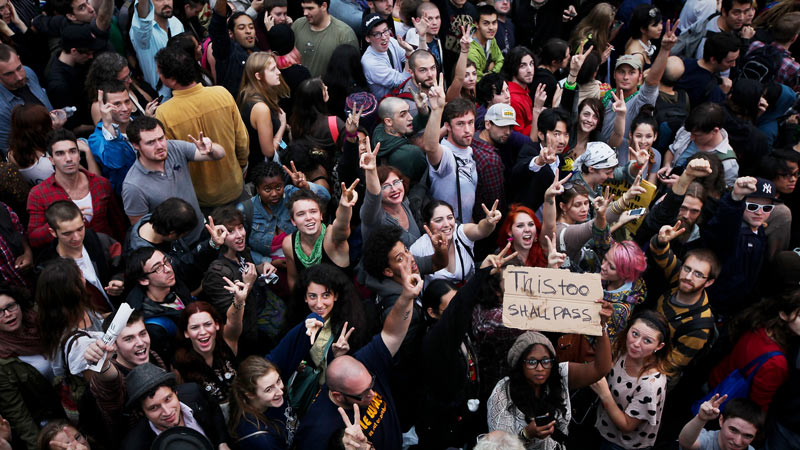 A suggestion on how to build radically inclusive movements.

'Rather than “picking up where previous generations” left off, as it is often put, I see our generation as presented with a project of going back into history and diving in deeper where our predecessors did not.'

For In These Times' December 2013 cover feature, “Generation Hopeless?”, the magazine asked a number of politically savvy people, younger and older, to respond to an essay by 22-year-old Occupy activist Matthew Richards in which he grapples with what the movement meant and whether Occupy’s unfulfilled promises are a lost cause or the seeds of the different world whose promise he glimpsed two years ago. Here is Asha Ransby-Sporn's response:

We are the 99% was never a slogan I could relate to. The rhetoric is sweeping, meant to be unifying, but does not set up a framework for thinking critically. As a young Black woman, I don’t expect the majority of Americans to understand my particular experience of racism, capitalism or heteropatriarchy. I have learned about the failures of the (white feminist) women’s anti-violence movement and the Black freedom movement to fully address the specific needs of Black women. And Occupy provided even less promise for the particularities of my experience to be explored.

Rather than “picking up where previous generations” left off, as it is often put, I see our generation as presented with a project of going back into history and diving in deeper where our predecessors did not. In  order to extract silenced narratives from beneath the surface in histories of resistance, our analyses must be intersectional—we must create a culture of solidarity that recognizes nuance and difference.

Over the course of the past couple years, with my involvement in Students Against Mass Incarceration, I have come to understand a model for organizing distinct from that of Occupy. Rather than being defined by or representing “the masses,” the growing mass incarceration movement begins with the most marginalized. We place ourselves in relation to those in prisons and detention centers, who are removed from society entirely, in an attempt to render them invisible. From there, we attach solidarity, recognize our own privilege, and trace our experiences under the web of oppressive structures in our analytical and organizing work. Through a radical Black, anticapitalist, feminist, anti-racist, prison-abolitionist lens, we can understand incarceration as it permeates our lives to varying degrees by way of policing, discipline and surveillance. While we stand in solidarity, we do not say, “We are all in the same boat.” A populist slogan like that of the “99%” would minimize the extreme suffering and forms of control experienced by those who are incarcerated and thus seen as non-human and undeserving of basic rights.

Our project requires that we stand in solidarity with whomever is most “other,” whomever is not conditioned to feel entitled to any rights and understand the function of oppressive structures that work together. I do not believe that our generation is hopeless. I do, however, think we need to equip ourselves with new tools and strategies for movement building. This radical approach, if we are careful, will help us guard against reinforcing the kind of hierarchies we seek to dismantle.

Asha Rosa Ransby-Sporn is a national organizing co-chair for BYP100, an organization of Black 18- to 35-year-olds that organizes through a Black queer feminist lens.