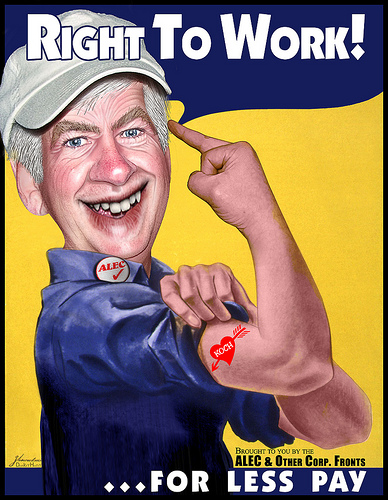 Caricature of Michigan Gov. Rick Snyder, one of the Republicans who use so-called 'right-to-work' ploys to stop union campaigns--whether or not companies agree. DonkeyHotey/ Flickr/Creative Commons

The GOP has jumped in to stop companies from letting their workers unionize.

Recently, Republicans openly displayed their contempt for CEO decision-making. They ridiculed executives who encouraged their workforce to unionize and sued to stop companies from remaining neutral during union organizing campaigns. Republicans hate unions, and since they believe they know best, they’re not going to allow corporations to accept unions.

Typically, the GOP styles itself as the all-knowing party, the party so God-like that it has the right to control how individual citizens live their lives.

GOPers believe, for example, that low-income cancer victims don’t need to live at all, so Republicans in 25 states refused the Medicaid expansion that would have provided health insurance to struggling families. Because GOPers believe they—not individual women—should control women’s bodies, Republicans have repeatedly tried to outlaw birth control.

Until recently, GOPers pretty well concealed the belief of some in their party that they should also control corporations. They call themselves the free enterprise party. To many GOPers, that means they should be free to control enterprises. That is because they think they are smarter than corporate executives. Recently, Republicans openly displayed their contempt for CEO decision-making. They ridiculed executives who encouraged their workforce to unionize and sued to stop companies from remaining neutral during union organizing campaigns. Republicans hate unions, and since they believe they know best, they’re not going to allow corporations to accept unions.

Just last week, the U.S. Supreme Court heard arguments in the lawsuit that right-wingnuts filed to criminalize corporate neutrality in union organizing campaigns. The gist of the suit is this:

A union called Unite Here was helping workers at a Florida racetrack, Mardi Gras Gaming, to organize so they could collectively bargain for better wages and benefits. Unite Here and Mardi Gras struck a neutrality deal in 2004 under which Mardi Gras would provide the union with access to the racetrack to talk to workers and would voluntarily recognize the union without a secret ballot election if more than half of the workers signed cards stating their desire to be represented by Unite Here.

The union promised that workers would not picket or boycott the casino during the organizing effort. And it would campaign for a ballot initiative to allow Mardi Gras to add slot machines, a measure the union favored anyway because it would create more jobs at the track.

Mardi Gras clearly felt the deal served its purposes. Unite Here estimates that it gave $100,000 in time and money to help win the ballot initiative.

After Mardi Gras got the ballot vote it wanted, however, it reneged on the neutrality deal. It cut wages and fired 10 workers who had signed an organizing flyer. Then it backed a lawsuit filed by the National Right to Work (For Less) Committee, a GOP hand maiden, on behalf of one worker who didn’t want the union.

In that suit, the Right to Work (RTW) For Less Committee is asking the court to declare neutrality agreements illegal. Federal law forbids companies from delivering anything of value to unions. That’s intended to prevent CEOs from bribing union leaders with stuff like cash and Cadillacs to accept crappy contracts. RTW for Less contends a neutrality pact is a thing of value.

The GOP, through its RTW For Less mouthpiece, wants to order corporations never to accept unions. This bit of conversation from the court arguments captures that:

Justice Elena Kagan asked William Messenger of the RTW For Less Committee if he was contending a company is forbidden from inviting a union onto its property even if the employer’s philosophy was: “I think that my employees should have a right to listen … and to decide for themselves whether they want to be represented.”

“That’s correct,” replied Messenger, asserting that a company has no right to allow a union on its property. The GOP thinks it knows best. For the GOP, best is no unions. So it’s going to make sure employers can’t allow unions, even if the company would prefer to collectively bargain with its workers.

The GOP sent that message loudly to Volkswagen earlier this year. VW told the workers at its Chattanooga, Tenn., plant that it would like to create a works council there.  To do that in the United States, the plant must be unionized because the council negotiates labor issues with the employer, the company told the New York Times.

When it became clear that VW, which deals with unions at all of its other major plants, would maintain a neutral stance toward a United Auto Worker (UAW) effort to organize the Chattanooga plant, Republicans began ridiculing the corporation. GOP Sen. Bob Corker, a former Chattanooga mayor, said, for example, that VW would become a “laughingstock” if it partnered with the UAW.  Tennessee GOP Gov. Bill Haslam and other Tennessee Republicans flatly told VW officials to reject the union.

GOPers Corker and Haslam insist they know what’s best for this international corporation.

Some big time GOP groups are backing efforts to persuade VW workers to reject the union. GOP anti-tax guru Grover Norquist’s group, Americans for Tax Reform, has bankrolled consultant Matt Patterson’s scheme to kill union efforts in Chattanooga, according to an investigation by In These Times.

In an op-ed, Patterson compared the UAW organizing effort to the Civil War. Using the charged language of those who fought to sustain slavery and glorifying a battle won by the forces of slavery, Patterson wrote:

“Today, Southeastern Tennessee faces invasion from another union—an actual labor union … One hundred and fifty years ago, the people of Tennessee routed such a force in the Battle of Chickamauga. Let their descendants go now and do likewise.”

In the radio version of Father Know Best, the patriarch was an arrogant potentate. He would say, for example, “What a bunch of stupid children I have!”

That is how Republicans have always regarded workers. Now they’ve revealed they feel the same way about CEOs.