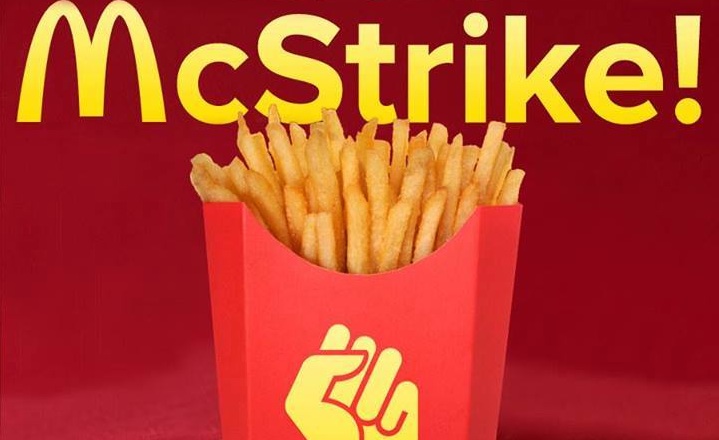 A Death Knell for the McJob?

Strikes in 100 cities signal a sea change in attitudes about low-wage work.

'Eight dollars and sixty-five cents is unacceptable. Not only are we the backbones of these companies, we bring the corporations the money, but out of all the people at the corporation and franchises, we get paid the least.'

Dawn Moore was on “strike” Thursday. It was more a protest than a conventional attempt to stop all work at her job site, but it still packed a punch.  She took a day off from her work at a McDonald’s in Chicago to join more than 150 protestors who marched from one fast-food or retail store to another in both the downtown “Loop” and several outlying neighborhoods. Chanting “we are the 99%” and carrying a giant Grinch puppet, they were there to demand that employers in those low-wage businesses pay employees $15 an hour and respect their right to organize a union freely.

“I think we all deserve a fair living wage,” says Moore, 41, a 7.5-year veteran McDonald’s worker. A divorced mother of two, she struggles to pay off $9,000 in student loans she incurred during less than a year at a “scam” college and has to move back and forth between apartments of a friend and a sister.

“Eight dollars and sixty-five cents is unacceptable,” she said, standing in the morning cold near a McDonald’s in an office tower. “Not only are we the backbones of these companies, we bring the corporations the money, but out of all the people at the corporation and franchises, we get paid the least. They’d rather give more money to the people who have a lot than to the little people who run their stores.”

Similar protests marked the rough one-year anniversary of a campaign that kicked off last fall in New York, then Chicago, before spreading across the country. In some 100 cities throughout the country, marchers from unions, community groups and other sympathetic organizations turned out to demonstrate on behalf of the workers—and in most locations, fast-food workers joined in, usually a minority of leaders from most workplaces, many workers did risk illegal retaliation by their bosses.

One of the cities that saw fast food demonstrations for the first time was Baltimore. Local labor activists staged modest protests at two separate McDonald’s franchises, though there were no instances of McDonalds’ employees actually walking off the job.

John Fariani, a student at Johns Hopkins University and a local spokesperson for the Low Pay Is Not OK campaign—the name under which the one-day strike was organized—said the demonstrators at a McDonald’s near the city's famed Fort McHenry national park had been organized through on-line promotions and local networks of labor activists. Of the dozen protestors at that site, most came from a local pro-labor group called Workers Assembly, while a smattering of other picketers represented the hospital workers union 1199SEIU or other organizations.

“Too many people view these [fast food] jobs as just for kids. That's just not true anymore. … I'm glad to see the picketing for a better wage. Now it looks like it is taking off,” says 1199SEIU member Marjorie Taylor.

The campaign—called Fight for 15 in Chicago and Fast Food Forward in New York, with other names in other citieshas succeeded in provoking a national debate over the growing dominance of low-wage, precarious work in the American economy, much as the Occupy movement led to a greater public focus on the gulf between the increasingly, spectacularly wealthy 1% of households and the stagnating or declining fortunes of the rest of the workforce.

While it has generated support for proposals to increase the minimum wage from the current rate of $7.25 to $9 by 2015 (from President Obama) or to $10.10 an hour (from Democrats such as Sen. Tom Harkin and Rep. George Miller), the $15 goal has set the bar higher. Along with OUR Walmart’s target of $25,000 a year, it is beginning to transform the debate from an arbitrary “minimum” that barely surpasses the poverty level to a “living wage.” Also, Trish Kahle, a leader of workers at a Whole Foods store, notes that, after Occupy’s successful effort to highlight the social problems of growing inequality, the Fight for 15 moved the battle over inequality into the workplace. Workers at her store struck before Thanksgiving, winning a guarantee that Thanksgiving will be a paid holiday next year and that the store will pay time-and-a-half for the day before Thanksgiving.

Coming out of the Great Recession, the number of low-wage jobs is growing 2.7 times faster than that of middle- or high-paid jobs, according to a 2012 report from the National Employment Law Project. As inequality grows, there is a greater social and economic need for improving the quality of jobs in retail and other low-paid sectors to provide family-supporting wages. In a speech on Tuesday, President Obama called growing inequality “the challenge of our time,” arguing that it not only damages society—increasing illness, social immobility, distrust and threats to democracy—but is “bad for our economy.”

Indeed, many economists have argued that inequality tends to slow economic growth by, among other things, increasing social conflict and depressing effective demand. Jared Bernstein, former economic advisor to Vice-President Biden, disagrees with some of those arguments in a new paper, but nevertheless concluded that “the channel through which inequality hurts growth is asset bubbles and financial –market instability.”

Low-wage jobs are a drag on the economy—as well as an injustice to workers–because they don’t even sustain the lives and labor of workers who perform them. The fast-food industry, like other low-wage job creators, relies on public subsidies. A University of California at Berkeley Labor Center report found that more than half of frontline fast food workers used public assistance programs, double the rate for the whole workforce, at a cost of nearly $7 billion a year—effectively a big subsidy to the industry that does not pay a living wage. McDonald’s does offer its hungry workers helpful advice, however, such as the suggestion that they take small bites of food and chew slowly to more effectively reduce hunger pangs.

The fast-food industry argues that if wages rise to $15 an hour, prices will go up and sales down. They say that companies will adapt by using more automation and self-service, both of which would reduce employment. Even some economists whose research shows that modest increases in the minimum wage do not cost jobs think that such a large increase most likely would.

But a job that can’t provide food, shelter and other basic needs is a pseudo-job. And historically, workers’ demands for higher wages have pushed managers to make technological changes that increase productivity, enabling the company to pay more if the workers have the power to bargain for higher pay—or more free time. Fewer jobs may be the immediate result, but workers’ higher pay in turn creates demand for employment.  Society’s goal should be good work for all, and shared wealth in many forms stemming from growing productivity, not just full under-employment with McJobs.