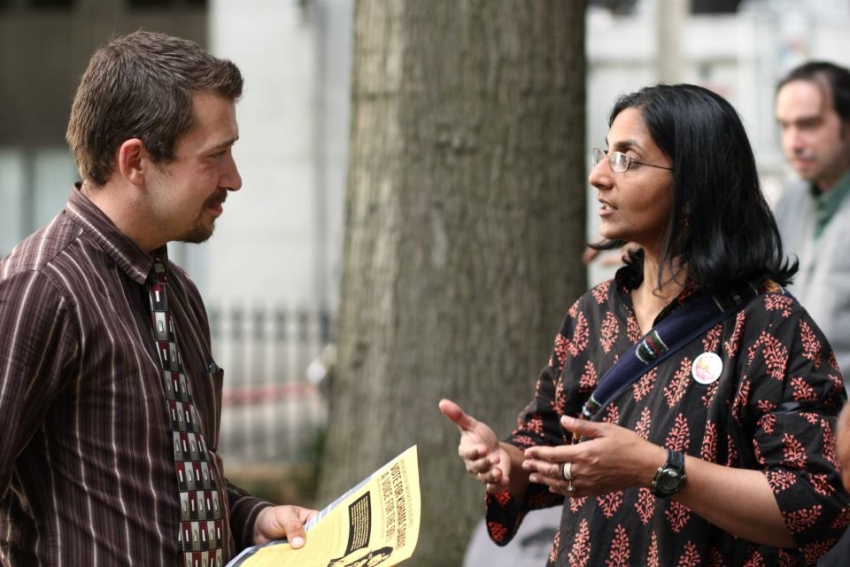 Can Socialists Win Elections in the U.S.?

Kshama Sawant of Seattle showed socialist victories are possible. Will they spread?

Much of the Left 'has assimilated a culture of low expectations and isolation,' Moore says. 'But this is something the Left should be capable of doing in many cities.'

“Indian-origin Kshama Sawant is first elected socialist in U.S.,” read a headline from The Times of India, the world’s most widely circulated English-language daily. This was testament to the attention Sawant’s campaign for Seattle City Council has generated—and to how much of America’s socialist heritage has been forgotten.

Sawant isn’t even the thousandth elected socialist in the United States, much less the first. At its peak a century ago, the Socialist Party of America polled at 6 percent nationally, had two representatives in Congress and boasted hundreds of state and local legislators.

But for more than a generation, socialism has been virtually invisible on the American scene. Its return in several high-profile local city council races—Sawant’s in Seattle, Ty Moore’s in Minneapolis and Seamus Whelan’s in Boston—has been surprising. Especially given the genesis of this push: not just widespread dissatisfaction with the economy and growing social inequity, but the efforts of a small Trotskyist party called Socialist Alternative.

Socialist Alternative first emerged as “Labor Militant” in 1986. Its activists were inspired by the example of the U.K. socialist group “Militant tendency,” which sought to enter the British Labour Party in order to radicalize its rank-and-file. A decade later it would use its position on the Liverpool City Council and elsewhere to lead an aggressive campaign against the Thatcher administration’s cuts to social programs.

The American militants adapted their tactics to the conditions in their own country. Without a mass social-democratic party to enter into, Socialist Alternative used its early influence in the now-defunct U.S. Labor Party of the late 1990s to advocate for electoral opposition to Democratic Party politicians. In the coming years the organization would be active in social movements, but it wasn’t much of a presence even by the slim standards of the American Left. It had neither the clout of the Democratic Socialists of America nor the number of activists of the largest American bastion of Trotskyism, the International Socialist Organization.

That all changed with the latest election cycle, when Socialist Alternative decided to run openly socialist candidates in just the right races.

The results, particularly for Sawant and Moore, were impressive. Sawant defeated longtime Democratic incumbent Richard Conlin by more than 1,000 votes. Moore lost, but by a narrow margin of 229 votes out of more than 4,000 cast, despite running against Democratic candidate Alondra Cano, who attracted last-minute support from prominent Minnesota Democrats like Rep. Keith Ellison, co-chair of the Progressive Congressional Caucus, and Sen. Al Franken, as well as corporate interests such as the National Association of Realtors.

Sawant’s victory and Moore’s close race have been labeled by some progressives as Cinderella tales of sorts: scrappy first-time politicians backed by a marginal socialist party battling against the Democratic Party. There’s something appealing about the narrative. Yet the reality on the ground was different.

Sawant and Moore had the backing of the local housing and immigrant rights movements, as well as labor. Sawant drew official endorsements from four different union locals, including her own, the American Federation of Teachers Local 1789. Moore attracted the support of the Service Employees International Union (SEIU) Minnesota State Council.

Javier Morillo, president of SEIU Local 26, one of the council’s three member locals, says the union saw an opportunity to shift debate in the city to the left by supporting Moore.

“Progressive governance needs left flanks,” Morillo says. The union’s “goal is always to move the ball forward as far as we can on progressive issues. That’s what we did in this race.”

Both candidates out-fundraised their opponents and had access to labor and community activists willing to put in long hours to support their campaigns, creating a vastly superior ground game to the Democrats. Sawant also had the curious support of prominent liberal media outlets—most notably Seattle’s alt-weekly The Stranger, which endorsed her campaign early on and covered it closely.

The Stranger news editor Dominic Holden says that while the paper, and most Seattleites, don’t share Sawant’s politics, they saw in Sawant someone who would take on the “toady, aging city council that is increasingly out of touch with the people who live here.”

“The fact that she is a socialist is irrelevant to most people and is irrelevant to us,” Holden says. “What’s exciting is that she’s presenting actual policy ideas about how to solve some of the problems in our city.” Those “actual policy ideas” were basic social-democratic demands. Moore, anchored in the city’s large and militant housing-rights campaign and running in an immigrant community, called for a moratorium on foreclosures and deportations. The centerpiece of Sawant’s campaign was a push for a $15 per hour minimum wage, echoing the ongoing national push by fast-food workers. She also raised the idea of rent control in a city where housing costs are skyrocketing. Both the minimum wage and affordable housing became central not only to Sawant’s race, but to Seattle’s other 2013 campaigns as well.

“People said, ‘Okay, maybe I’m not a socialist, but I support these demands, and I like that this person seems like a serious fighter for these demands,’ ” Sawant says. “A lot of people told us after the campaign that they voted for us because they were excited about social justice, and, ‘Oh, by the way, who was that guy you were running against? I have no idea who he is.’ ”

Though Sawant has secured a seat in City Hall, she sees electoral victories as offering limited gains. “This can’t be our endgame,” she says. “We can’t accept that pushing the Democrats to the left is as far as we can go. We are looking for a much, much bigger change in society. But it’s a process, and you have to bring people with you on the things you agree with, while being honest about your disagreements.”

Conditions on the ground may be better than they’ve been in the past, but this was still the victory of a committed, media-savvy minority. Yet the lesson from both campaigns is clear: Socialists can win, as long as they patiently build organizational capabilities, raise adequate funds and win over key segments of the Democratic coalition. With these conditions in place, Sawant’s Democratic opponent was outgunned and Moore’s barely pulled off an upset.

Much of the Left “has assimilated a culture of low expectations and isolation,” Moore says. “But this is something the Left should be capable of doing in many cities. … These are times when very bold initiatives can take off.”

Do these campaigns represent an electoral model ready for export elsewhere? Minneapolis and Seattle are cities with long progressive histories and electorates open to insurgent candidates. But Sawant says that rather than trying to attribute their success to unique factors in the two cities, leftists should figure out how to be successful in other contexts around the country.

“There are always specificities. You can pick any issue in global history and say it was unique to its context,” Sawant says. “There are openings everywhere. … It would be irresponsible of us on the Left if we didn’t take advantage of them.”

Socialists should not expect to always succeed when they engage in mass politics. This is a period of slow regroupment—of setback, as well as advance. But the Socialist Alternative campaigns show that those willing to take risks might find themselves in a position most on the Left aren’t used to: winning.

Bhaskar Sunkara, the founding editor of Jacobin, is an In These Times senior editor. Follow him on Twitter: @el_bhask. Micah Uetricht is an In These Times contributing editor. He is an assistant editor at Jacobin and has written for The Nation, Al Jazeera America, Dissent, Salon, and the Chicago Reader, and the author of Strike for America: Chicago Teachers Against Austerity (Verso/Jacobin Books, March 2014). Perhaps most importantly, he is also a proud former In These Times editorial intern. Follow him on Twitter @micahuetricht or contact him at micah.uetricht [at] gmail.